How Does Scott Pruitt Find Time To Rape And Pillage Earth With All This Grifting? 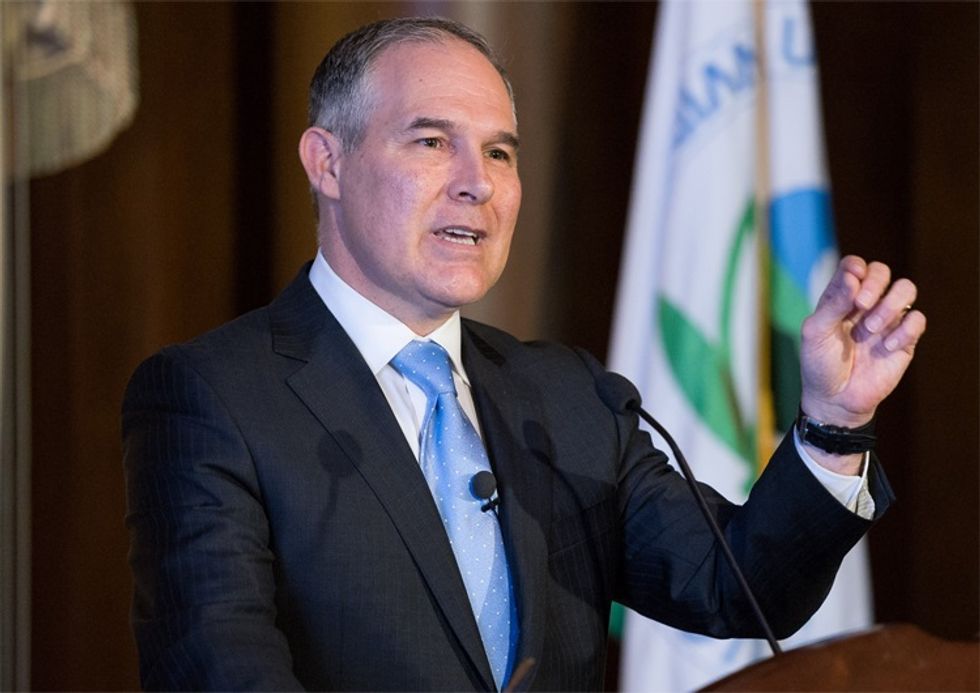 A man. A scam. Oklahoma.

If you had Scott Pruitt pegged as the griftiest grifter in Trump's Cabinet of Scam Artists and Incompetents, then you are today's big winner! Our money was on Zinke, to be honest. But judging by the last 24 hours, looks like Pruitt's got him beat hands down. We have five -- 5! -- Pruitt stories to round up for your pleasure, not including the story about the lobbyist condo from last week which we somehow missed. Nostra culpa, covering these sonsabitches is like drinking from the firehose!

Wasn't it sweet of those lobbyists to rent Pruitt that condo for, ahem, 'Fair Market Value'?

Last year, when EPA Administrator Scott Pruitt moved to DC, he was in need of a place to live. And in the luckiest of coincidences, Vicki Hart, the wife of energy lobbyist J. Steven Hart, had a spare room available in her Capitol Hill townhouse! The fact that her husband's firm was lobbying the EPA to get an oil pipeline approved for his client Enbridge, Inc. had nothing at all to do with letting Pruitt sleep in the spare bedroom.

But the Harts couldn't just let him stay there for free -- that would be inappropriate, doncha know. So they charged him $50 a night, but only for the nights he actually slept there. And they let his daughter use another bedroom while she was in DC for a White House internship, just to be nice. But don't worry, because the EPA's ethics chief Kevin Minoli has decreed that this was all above-board, since $50/night is "fair market value" for the use of the room. Another two-bedroom condo on that block is available for $3,750 per month, but sure, Pruitt's deal is TOTALLY KOSHER.

And how nice of Mr. Minoli to produce this memo last week, at least six months after Pruitt had moved out. Timing is everything!

Would you be FOR SHOCKED to find out that Hart's client Enbridge got its pipeline expansion approved by Hart's "tenant" Scott Pruitt? Would you faint dead away to read that the EPA gave Enbridge a clean bill of health, despite the fact that the company paid a $61 million fine in 2010 for spilling thousands of gallons of oil into the Kalamazoo River? Then you should probably not read this New York Times article where Hart denies having ever spoken to Pruitt about it. It's probably best you avoid it -- we are still waiting for our eyeballs to roll back from inside our heads, which makes it hard to type.

And maybe you'll want to give this Daily Beast piece a miss, too. Seems that Mr. Hart threw several parties for energy industry folks in his wife's fancy townhouse. But don't worry, because Scott Pruitt wasn't invited to the parties downstairs in the house where he lived. And if he was invited, he wouldn't have attended. And if he had attended, it would have been totally ethical.

It's good to be the king of the EPA!

When you're raping the environment for fun and profit, obviously you need good people around you. So Scott Pruitt brought two of his wonderful Oklahoma staffers Sarah Greenwalt and Millan Hupp to DC with him. As political appointees, they had salaries of $107,435 and $86,460 respectively. Which is not enough to live on in DC, where the rent is really high. (Usually. If you're not Scott Pruitt.) But Pruitt is a hell of a guy, so The Atlantic reports that he marched into the Presidential Personnel Office, aka the Presidential Vape Hut, and demanded a 50% raise for Greenwalt and 30% for Hupp. And even the drunken fratbros responsible for HR in the Executive Branch were like, "Nah, brah."

So Scott Pruitt put on his SMRT glasses and started looking at the EPA budget until he had A IDEA. A provision of the Safe Drinking Water Act allows the agency to hire up to 30 people without White House or Congressional oversight to meet specific staffing needs. In the past the law has been used to hire outside experts. But Scott Pruitt don't need no stinkin' experts. What he needs is a 26-year-old scheduling director and a 30-year-old "senior counsel" from Oklahoma, and he needs to pay them more than any of their co-workers. Oh, and he also needs longtime chemical lobbyist Nancy Becker to run the Office of Chemical Safety and Pollution Prevention. Lucky thing he has that clean water provision, since Becker would have had to sign that ethics pledge not to work on issues she lobbied if she'd been hired through the normal channels.

Nothing to see here, kids! Movin' along.

Don't worry, the White House is on the case!

In any other administration, Pruitt would be long gone. He'd have gotten the boot months ago when stories about his wildly expensive charter flights and Praetorian Guard broke. But the Commander in Grift appreciates Pruitt's lusty zeal for despoiling the earth and rolling back Obama-era laws. So he's probably safe for now.

The Wall Street Journal reports that the White House has launched an investigation, just to see if there's something Kevin Minoli missed in his extremely thorough vetting of Pruitt's living arrangements in the 48 hours after the story broke last week. But Politico says that Trump and COS John Kelly both called Pruitt yesterday to tell him he's totally cool. Of course they said the same thing to McMaster and Shulkin, so ...

What we're saying is, the White House will have plenty of ammunition to fire Pruitt if Trump ever decides he wants a non-corrupt EPA administrator. BUT DON'T COUNT ON IT.

Please click here to fund us! We don't live in some lobbyist's extra bedroom you know!