How Fun Would It Be If We Made Trump Sign The ERA??? 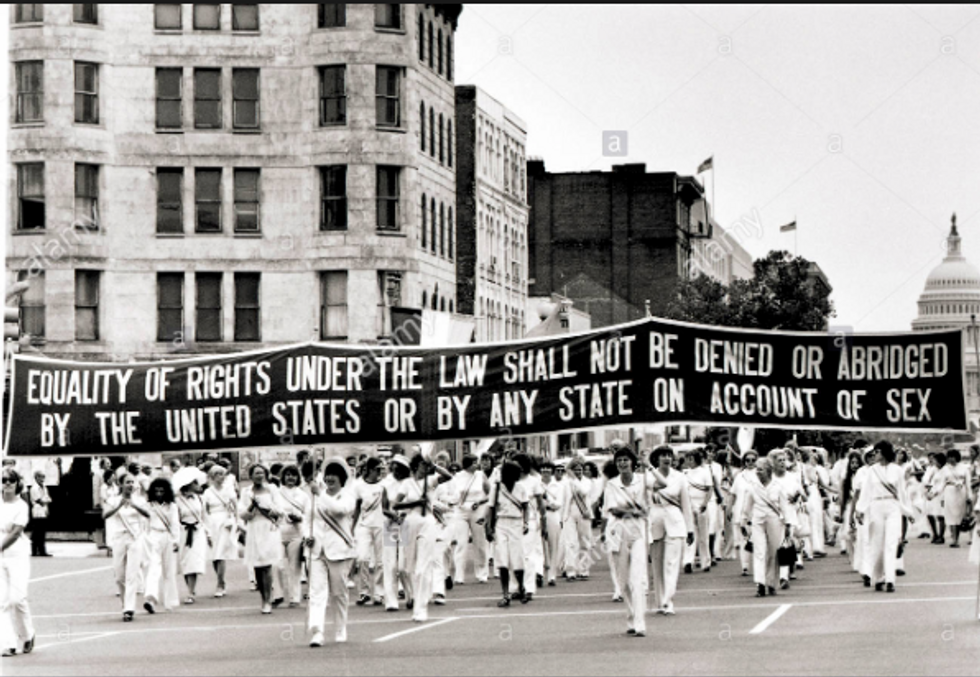 Last night, the state of Illinois finally voted to approve the Equal Rights Amendment. Given that I live here, I was very excited -- though disappointed that I could not be festive, as my "ERA NOW!" T-shirt is back home with my parents and the rest of my baby clothes.

The House voted 72-45 to approve the measure, only one vote more than was needed to pass it. Which means that 45 freaking elected representatives thought this text -- originally written in 1921 by Alice Paul and Crystal Eastman -- was just a little too radical for their liking.

Equality of rights under the law shall not be denied or abridged by the United States or by any State on account of sex.

They just weren't READY! Why can't we give them more time? Like another 97 years?

Here is what one idiot had to say about that, per the Chicago Tribune:

State Rep. Peter Breen of Lombard, an abortion rights opponent, called the measure “an alleged constitutional amendment” and warned it would be adopting an “illegal act.” But Breen also contended supporters “have no other thing they want to do” than expand abortion rights.

“It will expand taxpayer funding of abortions, very well might roll back our parental notice (for minors to have an abortion) law and have other negative impacts on various abortion regulations,” Breen said.

Well, yes. We absolutely do want those things. The Hyde Amendment is fucked and so is the 1995 Illinois Parental Notice of Abortion Act -- particularly the latter since it puts lives in danger, exposing teenagers to possible abuse, being kicked out of their homes, or being forced to go through with a pregnancy they don't want. Why anyone would possibly think it is a good idea is absolutely astounding. Are they stupid? Do they not know there are bad parents out there?

But if Rep. Peter Breen does feel that these things will be under threat if the ERA is passed, then does that mean that he is admitting that these laws do, in fact, deny women equality of rights under the law? And that this is a good thing? Nice!

In voting to approve the Act, Illinois became the 37th state to do so -- one short of the necessary 38 to put it into the Constitution. Unfortunately, the deadline to ratify the amendment was way back in 1982.

A Quick and Dirty on ERA History

As I mentioned, the amendment was first written by Alice Paul and Crystal Eastman back in 1921, but not without controversy among feminists themselves. (Jazz Age Feminists! They're just like us!) Basically, the middle class feminists wanted it, and the working class feminists did not because they felt it would lead to them losing labor protections they'd fought for. That, for a long time, was the crux of the whole debate, and also why Eleanor Roosevelt and groups like the ACLU and the AFL-CIO initially opposed it. But, by the late '60s and early '70s, pretty much everyone was on board, largely because unionization and labor laws had led to those protections being more secure. It was approved by Congress and assumed that it was just going to pass. But then an evil monster named Phyllis Schlafly came along and ruined it for everybody, by traveling around the country telling other women to stay home.

Schlafly's bullshit led not only to the Republican Party rescinding its support for the amendment (which they had done since 1940), leading them on the path to becoming the anti-woman party they have become today, but also to the amendment not passing in 1972. Then, feminists fought for and got an extension to get it passed by 1982, but were three states shy of getting it done (seven, if you count the states that rescinded their approval post-Schlafly).

Which brings us to the present day! Last year, Nevada voted to ratify, and with Illinois also voting to ratify today, that brings us to 37 states, one state short of what is needed to make it a constitutional amendment. Sort of! As long as the states that rescinded their ratifications -- Idaho, Nebraska, Kentucky and Tennessee -- aren't actually allowed to do that, and South Dakota's 1979 expiration date on their ratification doesn't count, none of which is very clear in our Constitution.

Whether or not it can still be passed despite not meeting the deadline is kind of up in the air, legally, and there has been a recent push in Congress to remove the deadline altogether.

One thing is clear though -- if we are able to get one more state (our best bets probably being either Florida or Virginia) to ratify, we at least have an argument. And if we were to win that argument, Donald Trump would be forced to sign it into law. Which, by god, would at least be very entertaining.