How Many Ways Can One Trump Adviser Lie About Tax Cuts For The Rich? ALL OF THEM! 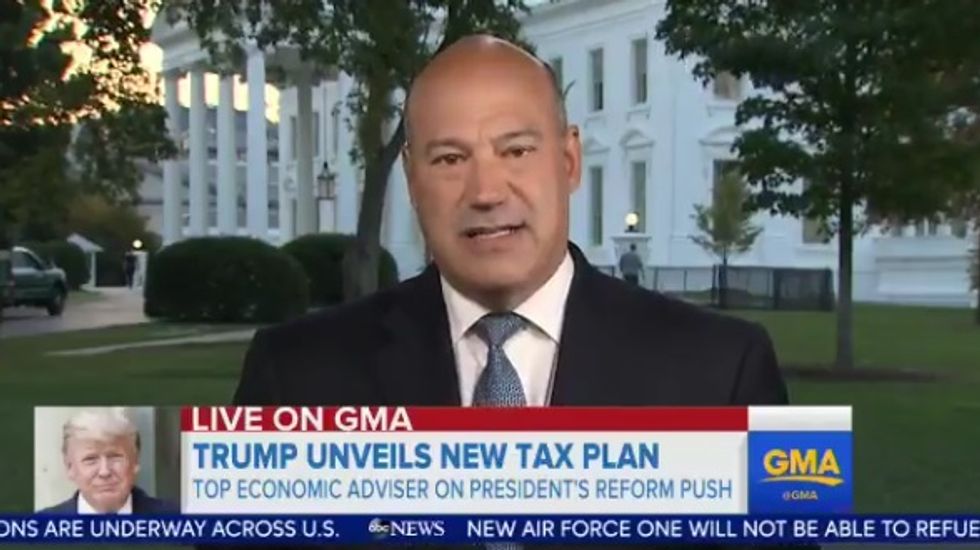 Trump economic adviser with his lying face on (it is his only face).

Gary Cohn, Donald Trump's top economic adviser, went on the "Good Morning America" television news-lite program this morning and lied his ass off about the GOP's wish list for "tax reform," which is really just a bunch of tax cuts that will go to the very very (very) rich. Host George Stephanopuolos really tried to shake Cohn from his assigned lie that the plan is "purely aimed at middle-class families," even though Cohn didn't budge. You see, even though the tax cuts are overwhelmingly aimed at wealthy people, those big tax cuts will allegedly create so much economic growth that middle-class families will do very well, too, as long as you ignore the unfortunate detail that past tax cuts for the wealthy haven't really trickled down to anyone but the wealthy.

To his credit, Stephanopoulos tried to get Cohn to admit he's selling bullshit, pointing out that a lot of the big big tax savings for middle-class families are pure fantasy so far, since details of who would pay what tax level haven't actually been filled in, or how big the new child tax credit would be, among other pesky details. Cohn ultimately couldn't really guarantee that "some" middle-class families wouldn't see a tax hike -- just a for instance, maybe, those in blue states who would no longer be able to deduct their state taxes -- although if that happened, such families would have to be outliers. Of course, the real problem with the GOP "plan" is that even if middle-class families see some cuts, the great bulk of the tax cuts will go to the richest Americans.

Not that Cohn was about to admit that, either, even though Stephanopoulos listed all the tax cuts that would help multimillionaires: the elimination of the estate tax and alternative minimum tax, cuts in the capital gains tax, the "pass through" business tax, and business tax rates: "That means millions of dollars for the president of the United States." But Cohn was not going off-script, no way, even when an incredulous Stephanopoulos asked him whether Donald Trump would get a tax cut. Just watch the pivot away from the question:

"The wealthy are not getting a tax cut under our plan." - Pres. Trump's top Economic Adviser Gary Cohn to @GStephanopoulos on new tax plan pic.twitter.com/QYv7kItcas

When we’ve looked at the tax plan, and we’ve looked what it does for Americans, we are very confident that Americans are getting a great deal here. We have also said that wealthy Americans are not getting a tax cut. We have designed a tax cut that is stimulus for the economy, where we are giving tax cuts to middle- and lower-income Americans. We want everyday, hardworking Americans to have more money in their paycheck.

Stephanopoulos gave Cohn one more chance to lie: "Will the wealthy get a tax cut or not?" Somehow suppressing the urge to twirl his long black mustache and tie an orphan to the railroad tracks, Cohn replied, "The wealthy are not getting a tax cut under our plan," which must be true because it's illegal to lie on national TV, isn't it? Stephanopoulos, with the commercial break bearing down on him, rather lamely came back with "That's not the evidence that's out there, but of course there's many more details coming," which would be incredibly lame if he hadn't been trying throughout the whole segment to get Cohn to stop lying. It may have been incredibly lame even as it was, because NUH-UH, THIS TAX PLAN IS ALL ABOUT HELPING THE ONE PERCENT.

Trump's New Tax 'Plan' Shakes Money Tree All Over Donald Trump! We Are Killed Of Shock!

Middle-class folks better not spend their $270 tax cut all in one place.

Eliminating the Estate Tax will help only the wealthy. Eliminating the Alternative Minimum Tax, which was put in place in the '70s to keep the rich from using accounting tricks to pay no taxes at all, will only help the wealthy. Reducing the capital gains tax will primarily help the wealthy -- as we noted yesterday, the AMT is why Donald Trump paid any income tax at all in 2005, the one year we have a tax return for.

As for the tax on "pass-through" business income, which is income from business that gets paid as personal income tax, that will also primarily benefit very rich people, as WaPo's Tory Newmyer points out:

[The] bulk of such benefits wouldn’t accrue to mom-and-pop outfits. An analysis by the Tax Policy Center this spring found that 85 percent of such a rate cut would go to the top 1 percent of earners. And the Trump Organization is a thicket of these partnerships. A letter the Trump campaign released last year from the tax firm Morgan Lewis said the then-GOP candidate's business empire consisted of more than 500 separate entities, operating “almost exclusively through sole proprietorships and/or closely held partnerships.”

Sure, they're reducing the top rate for mom-and-pop "passthroughs" from 39 percent to 25 percent. But the actual mom-and-pop outfits are already paying 15 or 25 percent. (Say, if mom and pop are profiting up to $150,000 a year.) It's the mom-and-pop hedge funds that will see the real action.

Virtually everything in this tax "plan" -- as with all Republican tax plans -- is designed to make the richest people in America richer, and even though there might be some small benefits to middle-income earners -- whoohoo, less than $300 tax savings! -- no amount of Trump administration blather about "helping ordinary Americans" will change that.

Oh, but the rubes will buy it, because Donald Trump hates the people they hate, so obviously he has their interests in mind.

Yr Wonkette is supported by reader donations. Please click here and we'll guarantee you'll get a tax cut. (Not A Guarantee)