How The Hell Is Scott Pruitt Abusing His Office Today? HINT: It Involves EATING MOR CHIKIN' 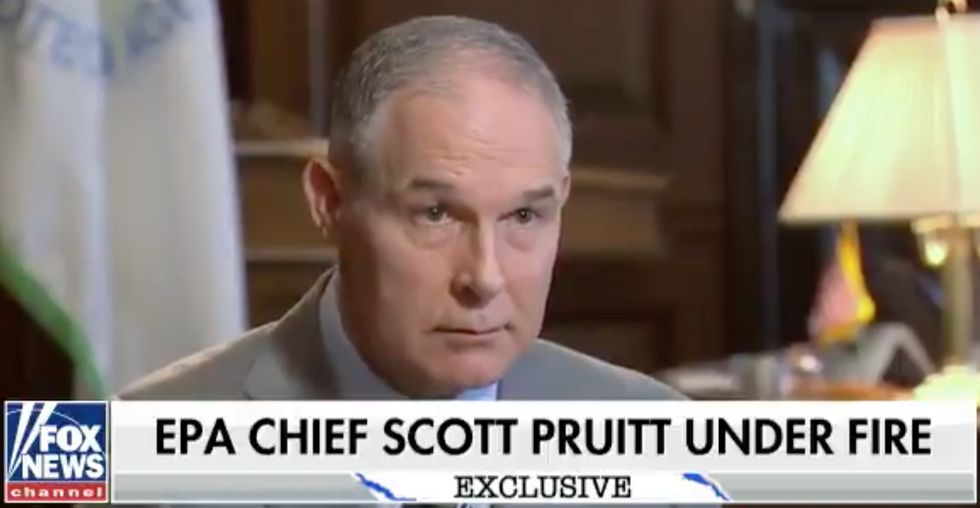 It is at this point scientifically impossible to keep track of all the instances of EPA chief Scott Pruitt's grifting and abuse of his office, because we literally get 14 new scandals a week from this stupid underqualified ass-munch. In any other presidency, Pruitt's shit would be front page news every single day, and he woulda been fired months ago. But this is Trump's America, home of draining the swamp and repopulating the swamp with even grosser, stinkier swamp creatures than ever did live there before, where grift and scandal are features, not bugs.

And now we have our next Scott Pruitt story, and it is that he for some reason decided to abuse his office in order to try to score a sweet-ass Chick-fil-A franchise for his wife, who needed a gol-dang JOB. Naturally he got one of his EPA employees to help out with this one, as well:

Three months after Scott Pruitt was sworn in as head of the Environmental Protection Agency, his executive scheduler emailed Dan Cathy, chairman and president of the fast food company Chick-fil-A, with an unusual request: Would Cathy meet with Pruitt to discuss “a potential business opportunity”?

A BUSINESS OPPORTUNITY, you say? Yes!

“The subject of that phone call was an expression of interest in his wife becoming a Chick-fil-A franchisee,” company representative Carrie Kurlander told The Washington Post via email.

OK, time out, what the fuck, WHY? Why in hell does Scott Pruitt need to talk to DAN FUCKING CATHY about setting up his wife Marlyn with a nice chicken establishment or three? Because we Googled for approximately three seconds and learned that if you have $10,000 of start-up moneys, and you meet some other qualifications, and go through the pre-requisite training, YOU YOURSELF can become the president of your very own Eat Mor Chikin' fast food establishment. Seriously, the application is online.

Was this just the height of grifty laziness? Did Pruitt figure he'd ask Dan Cathy for a Chikin' Reacharound, in order that his wife may flaunt the Chikin' Laws, pushing her to the front of the line and guaranteeing she'd be one of the approximately 100 new franchise owners selected that year?

WHAT THE FUCK WHY?

WaPo tells us part of why:

Multiple current and former EPA aides, speaking on the condition of anonymity to describe private conversations, said Pruitt told them he was eager for his wife to start receiving a salary. Two said Pruitt was frustrated in part by the high cost of maintaining homes in both Washington and Oklahoma.

Oh, so this was a GET A JERB, MARLYN situation. They've got a house in Tulsa they paid $1.18M for in 2012, according to public records, and they still owe $850K on it. (As WaPo notes, they have an ARM on it, which is ... did these dicks not learn their lesson after the 2008 financial crash?) Also they got a place in DC that according to WaPo is probably somewhere north of $3K per month to rent (no more el cheapo AirBnB owned by a lobbyist, we guess), so obviously Scotty's gub'mint salary of $189,600 ain't cuttin' it.

But apparently she didn't wanna GET A JERB! As it turns out, Marlyn Pruitt ain't never got no chikin' restaurant, because she didn't finish filling out the application, which is again ONLINE and DOES NOT REQUIRE A PHONE CALL TO DAN CATHY.

(Seriously, you guys, if you PayPal-ed us $10K right now, we could be well on our way to being the president of an Eat More Chikin' place by beer-thirty this afternoon.)

Anyway, apparently Pruitt also tried to hook his wife up with a nonprofit called Concordia, and they paid her $2,000 to do a thing, but we guess that was the end of that and now Scott and Marlyn Pruitt are lying around on the floor surrounded by half-finished job applications wishing they had a Trump Hotel jizz-mattress upon which to slumber, but they don't because they are not only total grifters, but they are BAD AT GRIFTING, and they are BAD AT MONEY, and they want you, the taxpayer, to fund their shitty life choices, THE FUCKING END.

Wonkette is ad-free, doesn't track your shit, and LOVES YOU. Money us if you are able?