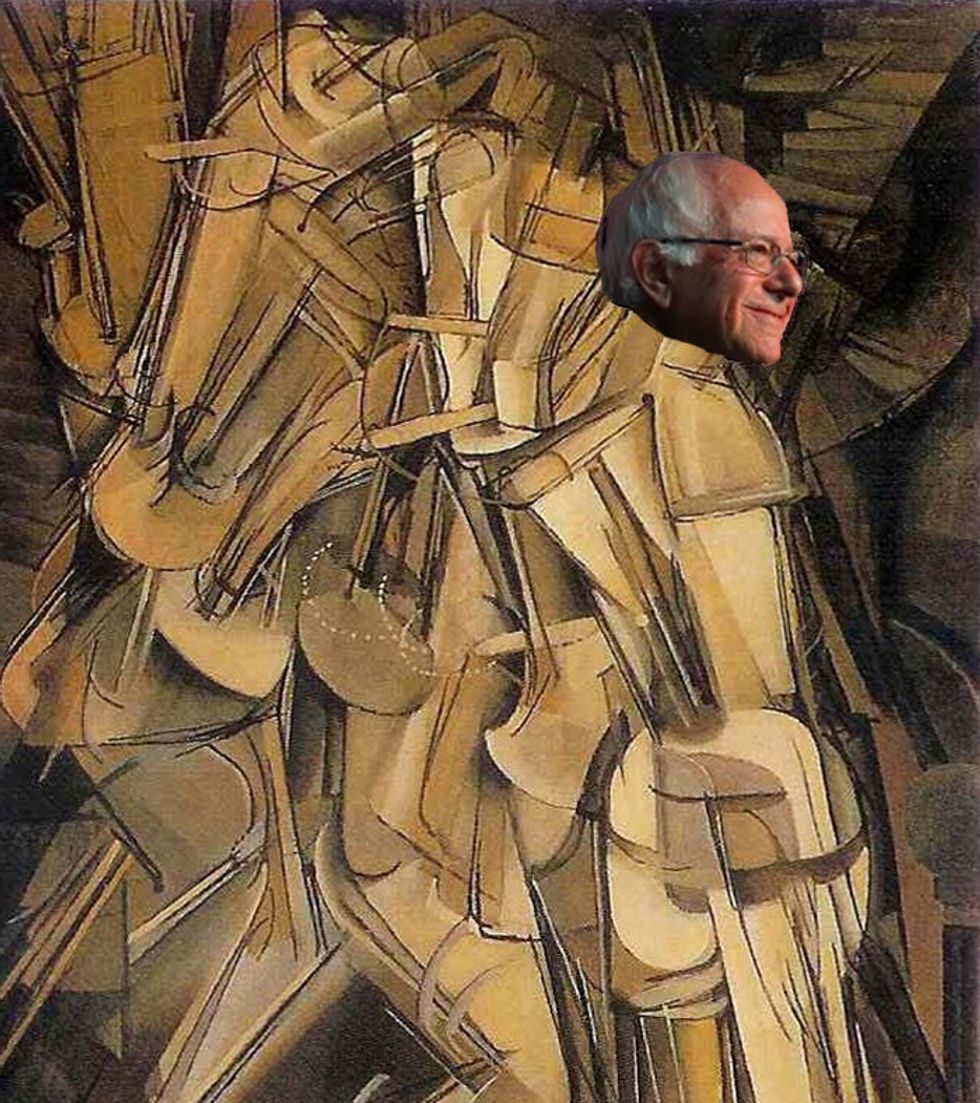 Welcome to another in our continuing series, "Wonkette reads pretentious shit about the election so you don't have to." Yesterday, Evan tackled Salon's paean to Donald Trump's tangible embodiedness versus Hillary's globalist abstraction (or "All That Is Donald Melts Into Air"), so today it is Yr Dok Zoom's doleful duty to guide you through the neo-post-meta-modernist mess that is this endless HuffPo piece by Seth Abramson that appears to be about Bernie Sanders, but is really about Seth Abramson doing literary theory all over a simulacrum of Bernie Sanders, and then guiltily stuffing the mess into a Kleenex.

Abramson begins with an observation just about anyone can identify with:

The problem I’ve had -- that many I know have had -- with experimental writing in the postmodern era is that it is deconstructive. What it shows us is only that things cannot and do not hang together over time; that we ourselves are contingent creations living in spaces that are always in the process of being compromised because they, too, are contingent. Deconstruction is thrilling because it gives the artist a sense of having exposed something, and her audience the feeling of having entered a pedagogical space in which something previously hidden is now open to view. But what we find, over time, is that having hidden things revealed to us over and over again by art finally has only the effect of reminding us that life is a many-chambered shell deliberately foreclosed to us by unseen forces.

God knows I hate when that happens to me, especially before I've had my coffee. Against the empty deconstructions of postmodernism, Abramson poses not "realism," which is of course so passé that an eighth-grader browsing TV Tropes can tell you everything wrong with any claim that art can be said to be "realistic," for it is all artifice, subjectivity, a bag of tropes, n'est ce pas? Postmodernism is so good at deconstruction that everywhere is Oakland; there is no there anywhere:

Cynical subjectivities, palimpsestic ironies, deconstructive framings, the jailbreak of iterability, so much fragmentation, cries of unavoidable degradation — these hallmarks of the postmodern no longer gesture at anything; the gesture itself has, for a great many of us, swallowed whatever it was that was worth looking at (or for) in the first place. The result is an existential despair no one can healthily live in for long.

Against this barren Eve of Deconstruction, Abramson places Metamodernism, which is so post-postmodern that it can rebuild where deconstruction has strip-mined meaning:

Metamodernists do not deconstruct; they encounter deconstructed landscapes and atop them aim to reconstruct the many overlapping possibilities those landscapes now obscure. Metamodernism is not cynical, or ironic, and it certainly has no interest whatsoever in deceit; it earnestly seeks to expand our sense of the possible by noting that multiple master narratives or metanarratives can co-exist in the same space.

And who is the Master who can upset the whole metanarrative applecart, make smooth the rocky way, and bring Balance to the Force? Bernie Sanders, of course:

I’ve been a metamodernist creative writer for many years now, but had not seen an opportunity to bring this earnest, optimistic, and loving art practice into my professional writing activities until Bernie Sanders came along. Not only do I fully support and endorse Senator Sanders’ agenda, I see in his political methodology evidence of the metamodern, just as I know for certain when I hear Clinton’s cynical incrementalism that I am in the presence of a postmodern political ethos. The reason we think of Bernie Sanders as impractical or even naive is that he is; what most fail to see, however, is that his is the “informed naivete” of metamodernism. He sees that our economic and cultural markets are in a terminal state of deconstruction, and yes, this makes him angry and “negative” in a certain respect, but he sees too that the opportunity this deconstruction affords us all is a moment in which we can reconstruct everything we’ve known in a way that better reflects our values.

Bernie's gonna make shit real again by tearing down the walls of the metanarrative, at least if he can flip enough superdelegates. Also, he is changing the nature of political reality:

Draw up blueprints for the impossible and you find, in time, that individual pieces of an impossible plan become first improbable and then merely unlikely and then even odds and finally, at long last, possible. Repeat that procedure enough times and universal wavelength function tells us that the very fabric of reality can be altered. In simpler terms, when Bernie Sanders tells Hillary Clinton that universal healthcare, universal higher education, and a living minimum wage are human rights, she may not realize it but that’s the end of the consequential part of the conversation. The long-term details of how these things are achieved pale in significance to the far grander and more audacious act of naming the impossible as possible in the first instance. Clinton demanding that Sanders compare his policies with hers as to these topics is so beside the point as to make the Secretary seem foolish; if I tell you I have the power to fly and in time will find a way to manifest that power to you in real time, your first response isn’t to ask whether I agree that all proposed flight plans should be pre-cleared with the FAA.

No, my first response is to ask you if you have a crash helmet and a net. Or perhaps to ask if I can have your car after you splatter all over the bottom of the cliff.

It turns out, however, that Bernie Sanders is actually doing something far grander than merely running for president or -- god forbid -- trying to nudge Hillary from the center to the leftish. You are a damnfool littlebrain if you think that!

Bernie Sanders’ “political revolution” is political only inasmuch as thought is political. What he is really asking us to do — or, rather, because he knows how many Americans grew up with postmodernism as their mother’s milk, what he is asking young people not so jaded to do — is participate in a metamodern Enlightenment that is, at base, a philosophical revolution.

Abramson goes on like this for a few gazillion words, and it's kind of interesting in an I-took-Critical-Theory-and-survived way. Bernie is sort of an avatar of The Secret: By dreaming political revolution, political revolution becomes possible. Depending on turnout, of course, and that has a lot to do with what the weather's like.

By the end, we learn that the real miracle of Bernie Sanders isn't that he managed a huge caucus win in Idaho, but that he's remaking reality itself:

The old journalism is dead because the Real as it constructs it no longer coincides with the Real as Millennials either experience it or (far more importantly) can imagine it. It speaks only to and into the past; the language it speaks in is deconstructive, but on a landscape so already deconstructed that every word it pumps into the ether is another kick to a dead horse; it speaks from a form of power -- temporal, monetary, geopolitical -- that won’t have currency in the decades to come. The chief currency today is of course virtual, and it’s attention. Not the cynical breed of attention we associate with the vocal ministrations of a carnival barker -- though this is the future Trump would sell us if he could -- but the attention to multi-dimensional narrative that actually creates possibility from impossibility. And that’s the only means of production Sanders is hoping his movement will come to control. Sandersism isn’t dying out, and won’t die out, because it is born not of so-last-century hash-taggable philosophies like #FeeltheMath or even the impotent rage of, say, #NeverHillary, but a commitment to turning the feeling that there are other realities out there than the ones we’re being exposed to into a way of life and not just a slogan.

So #FeeltheBern has nothing, finally, to do with Bernie Sanders.

The real revolution, the philosophical revolution, comes with a frisson of Jouissance, of play in the interstices of the possible, even if a lot of people merely think of Bernie Sanders as one old rumpled Jeu from Brooklyn.

Also, Millenials Rule, Boomers drool, and we had to stop reading because even though we loved us some M.M. Bakhtin and some Michel Foucault in grad school, eventually this piece simply sounds an awful lot like Seth Abramson sucking his own dick and calling it a magical recasting of reality:

My present metanarrative for the 2016 presidential election is no more true or false, in the long-term, than the other ones now available, but it constructs something new rather than rehashing something old -- and therefore has a special power that will continue to cause consternation to major media institutions and social media trolls the nation over. I’m told the Clinton folks don’t like it much, either.

Why? Because Bernie Sanders has won this election, and Hillary Clinton is only a ghost silently mouthing out the final lines of a play we’ve all seen before and an ever-increasing number of us no longer feel much need to return to. What Sanders offers, instead, is not the empty and passing affections produced by insubstantial rhetoric, but a robust and abiding love of possibility that loves the possible enough to go searching hopefully and without expectation in the only place that will finally matter to our grandkids -- the wide-open, still-unwritten spaces that lie beyond it.

Yes, if you strike him down, he will become more powerful than you can possibly imagine. And at the very moment Hillary Clinton is being sworn in on January 20, 2017, Bernie Sanders will transcend reality and become a being of Pure Light, which on the whole beats hell out of trying to get a budget resolution passed over Paul Ryan's incessant whining.

Literary theory has a hell of a lot to answer for, the end.