I, A Flaming Homosexual, Don't Give A Flying Fuck Whether Joy Reid Wrote That Shit 10 Years Ago 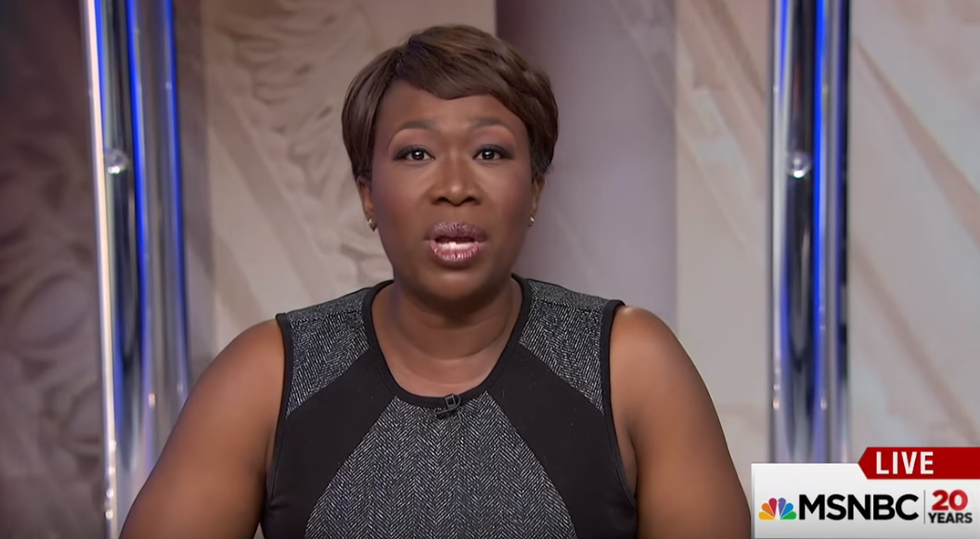 If you have been sleeping under a rock or just are smart enough not to spend your whole life on Twitter, you might have missed the cause du jour for some people of the left, the types who have nothing better to do than go after female journalists of color who fail to pass their purity tests, which is getting MSNBC's Joy Reid to SAY SORRY and GO AWAY LIKE A COMMON HILLARY, because she allegedly LIED about homophobic posts that allegedly appeared on her blog over a decade ago. I say "allegedly" because it hasn't been proven that she actually wrote them.

Reid says she didn't, and that this is a hack job to discredit her. Tech experts say "Ehhhhhh, not sure!" The cyber-security guy Reid hired says he found fraudulent log-in info for her blog on the dark web, and others are like "YOUR CYBER-SECURITY GUY IS CONNECTED TO THIS ONE NAZI, THOUGH WE CANNOT TELL IF THEY ARE ACTUALLY FRIENDS!" The FBI is looking into it, and for now, MSNBC is standing by her, whereas the Daily Beast has suspended her column. PFLAG, in a stupid and shortsighted move, has rescinded an award for her. Reid, for her part, has stayed quiet the past 48 hours.

The point here isn't whether or not she wrote the posts, but let's talk about them for a minute anyway. Greenwald has a very long article on The Intercept, where for the sake of JOURNALISM! he cites many alleged Joy Reid posts, dialing his rage up to 100 on each and every one. The posts are mostly just judgey and mean, especially toward people who seemed at the time like closet cases, people who voted against gay rights in public and were maybe gay in private. (Several of them have since come out of the closet!) And there was a thing about how lots of straight people think gay sex is gross and she didn't want to see Brokeback Mountain, because EW YUCK.

However, exactly zero percent of the posts rise to the level of what anti-gay preachers and hate group leaders spew each and every day, about gays burning in hell for a fiery eternity. Let's pick our battles, and SPOILER, "Allegedly Joy Reid Wasn't Great On Gay Issues 10 Years Ago" is a really stupid battle, to be engaged in only by complete fucking idiots.

Greenwald examines the posts so thoroughly to prove that he's totally Not Mad about the posts themselves, but rather because Reid supposedly LIED. His internet flock has also shifted its rage in lockstep onto the alleged LIES, once it was confronted with vicious anti-immigrant articles written 10 years ago by a certain guy named Glenn Greenwald.

The sustained BENGHAZI!!11!!!!! cry of Reid's detractors is enough to make one wonder about their motivations, especially considering their track record in fomenting discord among the Left (with Russia's help!) the past couple of years. (Oh look, WikiLeaks has tweeted about it! Susan Sarandon is getting in on the fun too! GOLLY GEE WILLIKERS, what do all these people have in common?)

So we get a month of Laura Ingraham's sponsors bailing, and a week of Sean Hannity being a hack and a profiteer, and, suddenly, Joy Reid is under fire.

I am not a great believer in coincidence.

The posts were unearthed by a lone Twitter user (sorry, babydoll, no link) who also unearthed very old posts back in December where Reid had made jokes about how Charlie Crist is probably super-gay. Reid has acknowledged and apologized for those posts, which mostly played with the idea that he was in the closet, a thought yr Wonkette has had a time or nine. Regardless, Reid has stated those posts were "insensitive, tone-deaf and dumb," which is a pretty good explanation from a hetero journalist about how she made some errors in judgment in the past on LGBT issues. Apology accepted! (Not that I personally asked for one.)

But again, Reid says these newly unearthed posts weren't her work. Joan Walsh, who worked with Reid back in those days and mirrored Reid's blog onto Open Salon, posted a Twitter thread explaining why she doubts the posts are real, simply because Walsh and her team were reading Reid's blog in real time (for cross-posting purposes) and don't remember them. Walsh also notes that the posts in question have no comments on them, while all the rest of Reid's posts had "lively" comments sections, and that moreover nobody has stepped forward to say they actually remember these posts.

Maybe the posts are real. Maybe they aren't. Who fucking knows! More importantly, WHO FUCKING CARES? Seriously, I am as flaming gay as a three-dollar amero, and I cannot muster the energy to care whether Reid did or did not write those posts, for a couple reasons.

First of all, the "social justice warriors" fucking this chicken really should be out there making some social justice instead of mounting a campaign to get one of the greatest leaders of the #Resistance fired. Because regardless of whether or not Joy Reid is lying right now (perhaps out of embarrassment, or MAYBE SHE IS A SECRET HATER OF GAYS), this whole shitfire of manufactured outrage is only happening because some Twitter Sheriff is out there spending their time searching web archives trying to screw Joy Reid, instead of doing anything of actual consequence in the world, and all the lemmings are following along and playing their part. DO BETTER, ASSHOLES.

Secondly, though, dwelling on Joy Reid's alleged Wrong Thoughts from 10 years ago is pretty fucking stupid for anyone who actually lived through and participated in the LGBT rights movement during the last decade. Those over 30 remember how the gay rights movement has played out over the last 10 years, but those who are younger (or those who act like they're BRAND NEW every day, like Greenwald) would do well to put the timing of these alleged Joy Reid blog posts in context.

In 2008, more than half of the country was against marriage equality. (The tipping point on that one came around 2012-2013.) Don't Ask Don't Tell and the Defense of Marriage Act were the law of the land, and states were still going apeshit passing gay marriage bans in their constitutions. Democratic politicians were still playing cagey, trying to split the difference and support civil unions, but not full marriage equality. (See: Obama, B. Hussein.) "Ex-gay" pray away the gay ministries ran RAMPANT with empty promises to hurting LGBT youth that "You can change, you can change, you can change!"

In short, the laws were different, the discourse was different, and a lot of people we adore hadn't really evolved in thought on the subject, or they were in some stage of their evolution that, to our ears in 2018, may sound pretty homophobic. I remember it vividly, because this is coincidentally about the time I got into the fight as an LGBT rights activist.

The fight for LGBT equality, as social movements go, has gone WARP SPEED in the last 10 years, and people have evolved BIGLY. Regardless of whether the posts are real or not, Reid's own track record on LGBT issues shows her own thinking has evolved.

So, to Joy Reid, whom I love: If the posts are real, just say it. Say you're sorry and do a show on how much has changed over the last 10 years, how your thinking has changed, and how far we still have to go. And if they're not real, use this as a Teachable Moment and do it anyway!

People who start juvenile pissant Twitter wars to destroy people they deem guilty of BadThink aren't going to shut up anytime soon, no way no how, but at least we can try to refocus on the actual wars we're fighting, on an LGBT level against those who are against us RIGHT NOW (i.e. Not Joy Reid), and on a greater level, against the autocratic shithole regime that's temporarily taken control of our beloved country.

And that, dears, is all I have to say about this stupid fucking distraction.