'I Am Dangerous,' Warns Michele Bachmann 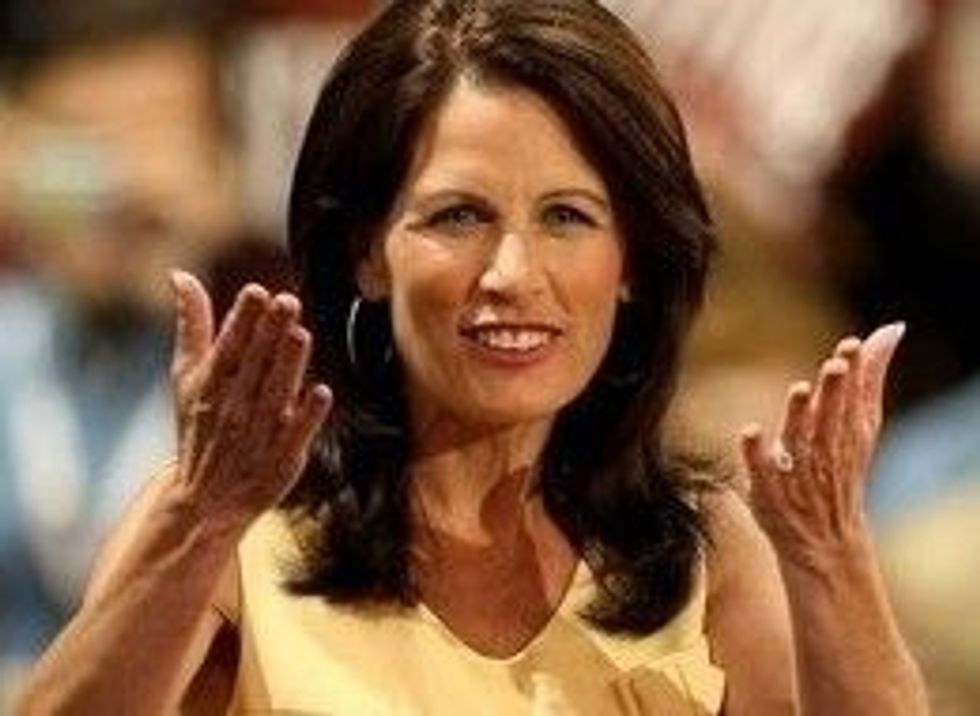 Congressional mama grizzly Michele Bachmann went on a radio show Thursday -- hosted bysome teenage friend of Andrew Breitbart's -- and revealed information about her past life as a martial arts mistress. "Hey, I took karate when I was 17 years old, I am dangerous," she told the youth, a precocious lad named "Ben Shapiro." And just how did Bachmann's karate-choppin' skills come up, exactly?

Because "Ben," who's apparently been watching too many violent Hollywood movies lately (don't tell his Mom, she'll ground him), fantasized out loud, on his radio program thing, about Bachmann kicking Obama's ass. "I think that you could probably beat up President Obama," he said. (Is Ben threatening the president with a "'dangerous' Michele Bachmann fighter-weapon"?)

If you hate yourself enough to listen to the full audio version of the interview, you will hear that Bachmann does not make any chuckle noises that might indicate she was just playin' about her mad fighting skills. She's being serious again!

She also says that Obama is in love with Hamas, that Teabaggers are just trying to "tell the truth about the madness," and unions are destroying the country with their negligent father-son inspector teams. And Obama needs to "man up" because it was "infantile" to blame BP for making the Gulf Coast oil geyser. "If the president wanted to, he could intervene and he clearly hasn’t," she said. "He’s not about taking responsibility."

Usually in Bachmann's world of gigantic federal police-state forces and census devil spies, government intervention is bad. But now it is good? So confused about what she wants! She must be a really hard person to buy gifts for. (Note to self: "Get Bachmann birthday gift card to the lumberyard/concrete block store, exchange policy req'd.")

To be fair, in this instance Bachmann is almost -- almost! -- out-terribleized by the youth Ben, who calls her "plainspoken, brilliant, and incisive," and many other very nice but totally untrue things. He kinda sounds "puppy lovey," even. (Seriously, don't listen to that interview, it is gross and will destroy your weekend.) [BigGovernment.com]