I Got Kicked Out Of The Militia's Motel Room 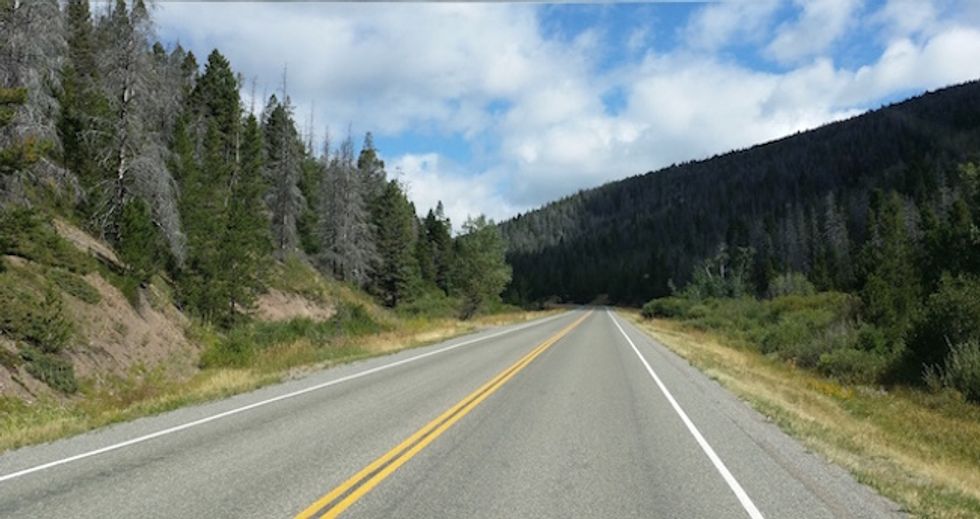 Lincoln, Montana, is barely a town, although it does have several bar-casinos, at least three motels, and the Sleepy Hollow RV camp (trailer park) where we pulled up in the rain. The Unabomber lived a few miles outside town limits specifically because the ponderosa-covered Rockies are the ends of the earth. Now, the Oath Keepers militia is here to aid and abet a fella with a beef against the government. In general, it's the same kind of disagreement that led to Cliven Bundy aiming his rifles at the G-men who'd come to collect the fees for his grazing his cattle on federal lands. In the particular, George Kornec and Phil Nappo have a mining claim on federal land; they've put up a garage and a fence, and the dastardly government is pushing its weight around and being a big bully and being really terrible and stuff by telling Kornec and Nappo to take them down.

You can see why such an insult and outrage would call for militiamen and rifles, just as a similar threat to liberty did in Oregon earlier this year. Why, it "smacks of offenses listed by Thomas Jefferson in the Declaration of Independence," even! (The undoubtedly skilled lawyers of the Oath Keepers believe that filing a mining claim makes federal land your "private property," which the very first commenter on their own website pointed out: "everyone would use it to have their own personal paradise in the National Forest or on other public lands, or to block access to public lands like many hobby miners want to do and environmentalists would like to do." You would think the armed men of the Oath Keepers would listen to the part about environmentalists, at least!)

We pulled up to the Three Bears Motel, where the Oath Keepers' website promised we could find "orientation" in room 4. A burly man with a shaved-bald head to go with his neck beard and an Iron Cross, named Mouse -- presumably named Mouse the same way Hell's Angels name their 300-pound colleagues "Tiny" -- swung the door open before we'd even knocked. He was friendly and warm, and a gray-haired fellow behind him folded his hands across his belly and smiled the whole time, in a grandmotherly fashion, at Donna Rose in my husband's arms. "Precious cargo!" one of them murmured. Oh my, yes, she is!

The Oath Keepers approved of the way we had procreated.

They invited us in to the pristine room, the beds made up with a lime green Oath Keepers flag spread across one. There were four rifles, and a handgun in a case.

Mouse swept out a chair from the table for me to sit in and invited my husband to take the other. He sat on the edge of the bed and asked who the hell we were. (He did not say "hell.")

"We have a website about politics," I said, and then because I can never help myself: "We're a bunch of liberals!"

BZZZZZ. Wrong answer, me, as always!

"I don't believe in liberalism," Mouse explained unnecessarily. But, I mean, we do exist. I pointed out, smiling continuously, that we're still Americans, we just disagree on some stuff! And I love talking to people and blah blah fucking blah! I got less than one full rambling sentence in before Mouse laid down the law: He would talk. I would not talk.

He went on at some length about the media, and how they twist the things he says, and so he wouldn't be talking to us.

"I was in newspapers for 24 years," I said, and then in a fit of self-awareness added, "although I'm sure that's no comfort." I was trying to get to my point -- that I covered the John Birch Society and various other rightwing patriots for 12 years at OC Weekly and had never once been accused of misquoting someone -- but Mouse did not permit me to continue.

"Should I get Mary?" the gray-haired fellow asked. "Not yet," said Mouse. Who was Mary? Would she wrestle me out of the motel room so the chivalrous gentlemen would not have to lay violent hands on a lady? MAYBE! But she's also the group's public information officer, according to their website. So that was a relief!

"I'm not gonna talk to you except to say this," Mouse said. "God, family, country, in that order. That's what we believe in." I offered to get a pen so as to not at all in any way whatsoever misquote him or twist his words. "No," Mouse said, "you're not writing down anything. You're not quoting me on anything. The media lies."

"So I'll say you declined to comment then," I offered.

"So I'll say you declined an interview?" I was getting confused.

"No. I said nothing. Nothing in this motel room happened."

I was more confused. Ah, perhaps he was not the official spokesperson and couldn't speak for the group! "So are you not the spokesman then?" I asked.

"Oh, no, I am!" he assured me. "But I'm not talking to you. I want your word that you won't write anything that happened in here." He asked for my word a couple more times, and surely noticed that I had not given it. Luckily, the baby starts crying. They were all smiles and reassurance: nothing wrong with a crying baby, no need to be embarrassed, a crying baby is God's gift to a family, etc. (They said this with their faces.)

"No. You're not allowed there," Mouse said, and it was forceful, and my husband began to eye the rifles. (Later, I would express confusion at this: "Aren't they the guys who want to be better dads?" "You're thinking of the Promise Keepers," my husband clarified for me. "They're wingnutty in a different way. These guys are a fucking militia." Ohhhhh.) Mouse continued: "It's private property."

"But it's on federal land," I reminded him, and of course this is the crux of the whole matter. They do not believe it is federal land; they believe it belongs to these old guys, because they wanted it. Two men fencing in the commons. And the Oath Keepers militia is there to help, with its guns, and not by marching on Washington to be better husbands.

"It's private property," he reiterated, getting louder and more menacing. "You're not allowed there."

"Well, what about outside the fence?" I asked. Nada. Goose egg. I was not allowed, even though as a liberal do I even exist?

We thanked them again and started to scurry for the door.

"This did not happen," Mouse reminded me. "If you write down anything I said in here, I will call you a liar."

This is the first post from the Wonkette Wonkebago Fall 2015 Itinerant Panhandling Tour And Quitterthon, rolling up to your armed standoff soon.