I Saw Santa Doing SOMETHING 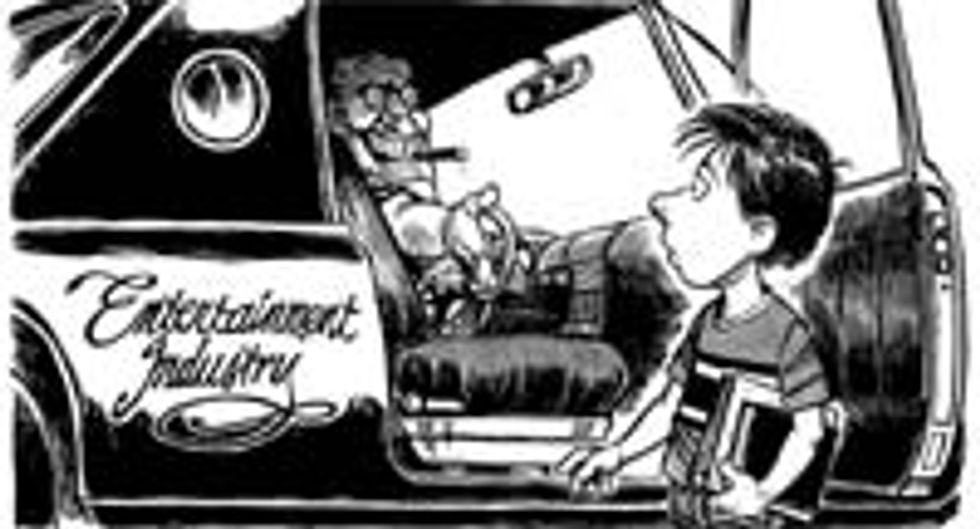 By the Comics Curmudgeon
Heterosexual Americans, forced to acknowledge that gays lurk in their midst, have focused their attention recently on identifying them. They do this the way they do everything else: with easy-to-encapsulate stereotyping! Gays are thin, neat, clean shaven, and bitchy, or so the stereotype goes. But like all stereotypes, this one has its exceptions! For instance, what if you found out that there was a gay man who was fat, and hairy, and downright jolly? Would it change everything you knew about the world and how it worked? Would it BLOW YOUR MIND?

Anyway, this is just a long, roundabout way of saying that, once he had finished with his long, strenuous Christmas delivery schedule, Santa totally celebrated by bringing some nondescript bald dude back to his North Pole sex lair and just stone cold fucking him. This fellow must have been on the "extra nice" list, if he merited some sweet, sweet Santa-loving underneath the special candy cane blankets. Were the elves huddled just outside the door while all this was going on, tittering and masturbating? Was Mrs. Claus down in the kitchen, crying her eyes out as she realized the cruel double meaning of the phrase "Santa's beard"? I guess this is supposed to be about how "lobbyists" and "Congress" are metaphorically "in bed" together, though those labels are so hastily pasted on that it seems that somebody realized that his deadline was approaching and just dipped into his extensive collection of homoerotic Santa art for the day's cartoon.

Heartened by prominent fatso Santa coming out of the closet, many other portly gays have openly declared their orientation as well, challenging both narrow-minded heterosexual views of the gay community and negative body image messages among gay men! If an overweight bald man like Dick Cheney can embrace his own man-love, then why can't everyone? He's living proof that so many barriers can be broken: that a white man can be a loving partner to a black man, that a white man can be first lady, that gay relationships can be just as scarred by nagging and hatred as straight ones, and that even the wispy ring of hair around the heads of bald men can be made pretty with just a few hours of being set in curlers.

But one thing a gay couple cannot do, try as they might, is create a new human being using their naughty bits. No, that blessed task is limited to heterosexuals! Heterosexuals like Nancy Pelosi and Harry Reid, who, well, you know, lots of late nights up there on Capitol Hill, arguing about the details of health care reform, and the public option, and one thing leads to another and then, well, whaddya know, nine months later, they've produced some kind of horrifying monster with terrible claws! This is exactly the reason why we need to protect the traditional family, to make sure that we have more of these.

But kids! It's not easy to raise them in this day and age, am I right, people? I mean, if they're not being monstrous taloned beasts, they're off getting molested! In this sad scene, we're seeing yet another innocent youth falling victim to America's number one sexual predator: Franklin Delano Roosevelt. Very few people know that, once he had ended the Depression and ensured that the Allies were well on their way to victory in World War II, FDR faked his own death so he could move on to his next goal: Ensuring that America would always have the greatest entertainment industry in the world. And now, decades later, we know that he succeeded in this herculean task, as anyone who's tried to watch a European so-called "movie" can tell you. Nevertheless, his long experience in Hollywood inevitably eroded his formerly sterling morals, so now he prowls the streets in his AMC Pacer, looking for little boys.

Don't blame FDR, though! The sinister cabal of weirdos who produce America's movies and television could corrupt the most saintly of individuals. Just ask Mother Nature! After making it through billions of years of history with her dignity intact, this talented earth-goddess inked a development deal with a major Hollywood studio a couple of years ago, and now look at her: wearing embarrassingly revealing clothes, huddled in the back of a limo, clearly still suffering from whatever array of mind-altering substances she indulged in last night. She pauses to snarl at the paparazzi, hating them but at the same time indebted to them for keeping her drugged-out face on the covers of the tabloids, which at this point is the only publicity she gets.

Later, wracked with anger and self-loathing, Mother Nature lashed out by sending her snow-demon minions to punch every American in the face.