ICE Giving Migrant Parents A Break From Their Kids, Hopefully Will Return Them Someday 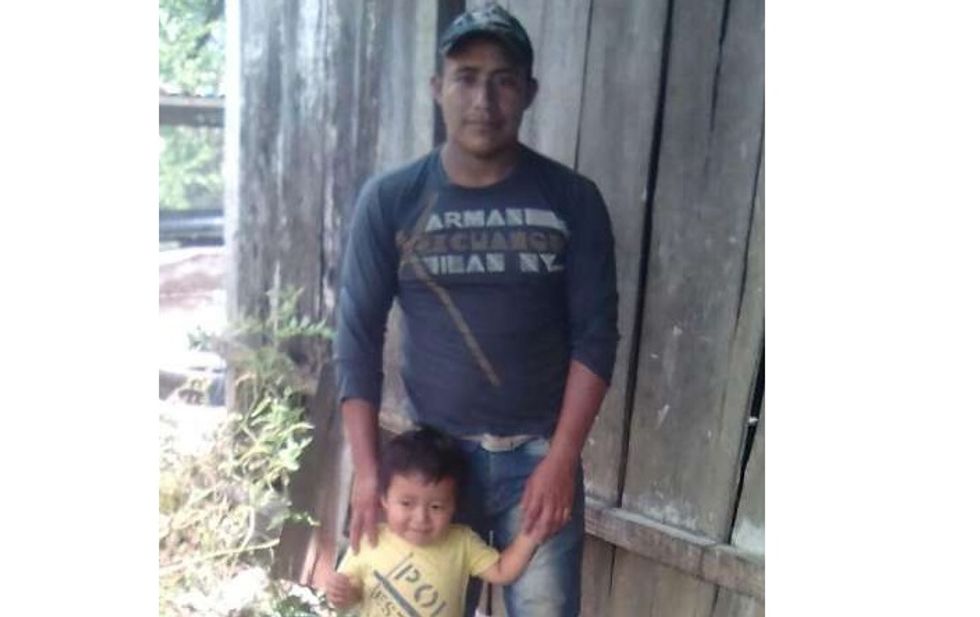 Esteban Pastor and his baby.

Last July, Esteban Pastor migrated from Guatemala to the US border to try to get work for a few months, to pay off a hospital bill for his then 18-month-old son. He'd heard (incorrectly) that his chances of being allowed to stay in the US if he were caught would be better if he had family with him, so he brought the baby -- who had by then recovered fully -- along with him. But when he was arrested by Border Patrol agents in the desert outside El Paso, the agents saw Pastor had been deported once previously, in 2014, so his re-entry was a felony. Pastor went off to ICE detention pending prosecution, and his son went into a facility for unaccompanied minors, and no, ICE wouldn't tell Pastor where.

[wonkbar]" rel="noopener" target="_blank">[/wonkbar]You see, while immigrants charged with crimes are having their kids taken away from them and placed in storage (sometimes in foster care), the government often doesn't make any particular effort to inform the parents where the kids went, or to reunite them once the parents are deported. In fact, reports the Houston Chronicle, since the government says it wants to prevent human trafficking, parents aren't even allowed to know where their kids were taken until the government can prove the relationship between parent and child. And even then, the rush to deport people often leads to longer separations. As the New Cruelty ramps up family separation under Jeff Sessions's "zero tolerance" plan, we can only expect even more kids to get misplaced in a bureaucratic maze.

After Pastor was arrested, the only thing ICE would tell him was that his baby was "somewhere in Texas."

ACLU Tells ICE To Knock Off The Nazi Shit

Don't worry, it's only a little fascism, and it's probably not happening to your family. Yet.

Not that getting families back together is much of a priority for the machinery of the Deportation State, because the goal here is to scare people away from crossing the border, regardless of whether migrants may have legitimate asylum claims. And despite the government's insistence that asylum-seeking families won't be separated if they cross at official ports of entry, that's happened, too -- in fact, the ACLU sued Homeland Security after it took a Congolese woman's 7-year-old daughter away when she requested asylum at an official border crossing, so please spare us the "this only happens to illegals" shit, OK? (That suit was been expanded to a class action on behalf of all separated migrant families.)

Immigrant rights advocate Michele Brané, executive director of the migrant rights program at the Women’s Refugee Commission, told the Houston Chronicle, "In many cases, [families] may never" be reunified after ICE takes children away:

Again, the goal is scaring potential migrants from coming at all -- if families are eventually reunited, good for them, but really, that's not a big concern for Donald Trump and his supporters:

But don't worry! The Office of Refugee Resettlement (ORR), which takes charge of children after they've been very compassionately ripped from their sobbing parents' arms by ICE, issued a statement to let you know they really aren't trying to lose any kids:

Patrick Fisher, a spokesman for that agency’s Office of Refugee Resettlement in charge of migrant children, said in a statement that the agency works with Homeland Security and other authorities to find parents. He said it has done so in about 700 cases between October and April where parents were in DHS custody. The agency couldn’t say how many were reunified, saying that data is not “in a reportable format.” It didn’t track separations before that period.

Fisher said the agency is “not routinely informed about how or when the (unaccompanied child) became separated from their parent(s) or the whereabouts of the parents.”

Why Not Just Put The Immigrant Kids Ripped From Their Parents In Manzanar?

What about all those FEMA reeducation camps Obama was going to imprison patriots in? Could put the kids there.

America's getting so great we hardly recognize the place anymore.

With family separations expected to surge so much that ORR is looking into warehousing kids on military bases, you might think it would be a good idea to have a "reportable format" for that information, huh? Particularly since, as the Arizona Republic reminded us again yesterday, DHS Secretary Nielsen acknowledged a month back that even before the ramp-up in family separations, ORR couldn't entirely be sure of the status of nearly 1,500 kids placed in foster care. Again, probably nothing to worry about -- as we noted when the story first ran, the government simply didn't bother following up on any of the kids whose temporary guardians didn't answer the first phone call to check on the kids. Just think how much staff time and money that saved!

Eventually, Esteban Pastor was reunited with his son, but only after Pastor was deported to Guatemala without the boy: An ICE spokesperson said the agency made arrangements to update Pastor on his toddler's location and even arranged a chance for him to "make telephonic contact" -- but no, that never happened because the detention center where he was being held pending deportation filled up with people scooped up after Hurricanes Harvey and Irma, and nobody had time to let him make that call or even tell him where the boy was. Then when he begged to get his son back before he was deported in October, an agent reluctantly made a phone call and announced, "Your son’s not going back today." So off he went to Guatemala without his kid, who remained in foster care; the baby was eventually returned to Pastor on January 2, just in time for his second birthday.

Hooray for the New Cruelty! Bet nobody in Pastor's village will dare take their kids across the border now, and the only cost was four months of separation from the little guy's family and whatever the psychological scars that might cause to a tiny child, huh? Pfft. It's not like some white person's dog died on an airliner, so don't expect any congressional hearings.

As we say, go read the whole horror story at the Houston Chronicle. Prepare to be incensed. And let's please elect a Congress that will stop this shit. Lives are literally at stake.