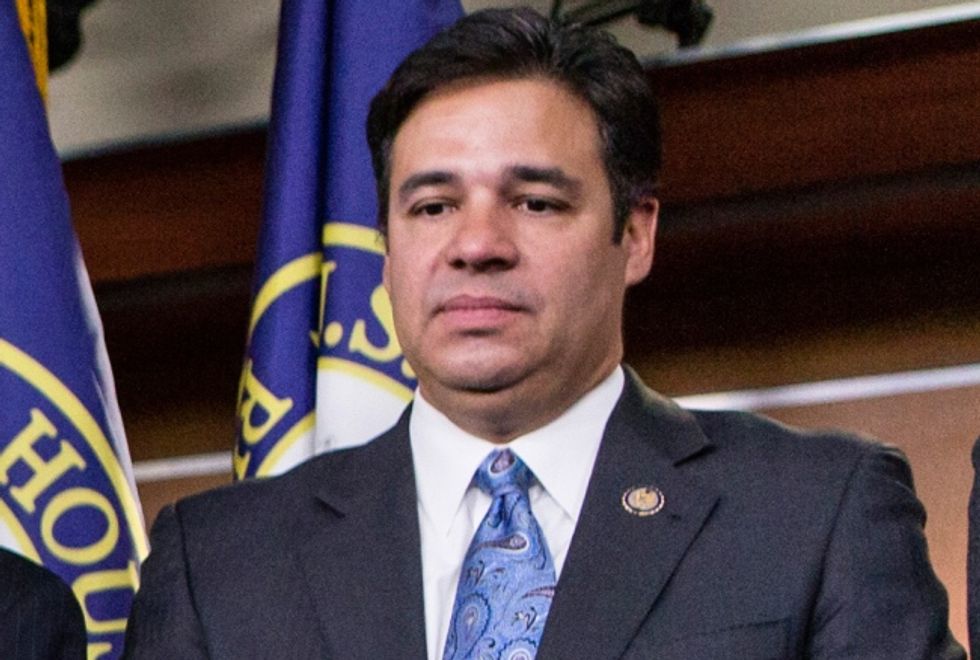 Most Labradors are a lot friendlier

We have yet another Profile in Congressional Courage Or The Exact Opposite Of That for you, courtesy of the staff in Idaho congressdoofus Raul Labrador's office in Lewiston, Idaho, who called the U.S. Capitol Police to complain of "threats" from a group of older constituents who have been petitioning for redress of grievance with malice aforethought. Chelsea Embree of the Lewiston Tribune says a spokesman for Labrador's Lewiston office, Scott Carlton, reported the scary old folks to the Capitol police force after he believed local cops hadn't done enough to keep Labrador's staff safe. So if nothing else, today we learned that the Capitol Police actually do have jurisdiction over congressional offices nationwide.

So what are these dangerous older Idahoans doing to threaten Rep. Labrador's staff? Must be pretty awful if Carlton had to call in the Federales, huh? It's a gang of civic-minded thugs from the Idaho city of Lewiston and its Washington sister city, Clarkston, and goes by the street name "LC Valley Indivisible." They've engaged in terrifying acts of intimidation including weekly visits to local offices of Idaho's congressional delegation, where they have read prepared statements urging the legislators to preserve and strengthen the Affordable Care Act. Also, sometimes they picket outside, just like violent mobs might, only in small numbers and without any violence.

About half a dozen citizens met with Carlton briefly on Feb. 7 -- their only interaction with anyone from Labrador's staff, according to members of the group. Lewiston residents Steve Carpenter and Jim Koreltz, both Indivisible members, said Carlton gave the group two minutes to speak, as Carlton said he was headed elsewhere for a meeting.

A woman read a prepared statement to Carlton, Carpenter said, and a few other group members made statements or asked questions. "Then we were pretty much out of there," Carpenter said. "There was no other nasty exchanges or anything."

Horrifying, we know. Sorry, perhaps we should have added a trigger warning. Ah, but then things escalated, as they do with old people fired up by too much cable television and Wonkette: After Carlton left the office, he went to a meeting of the local Chamber of Commerce, where he "allegedly said an aggressive individual got in his face." So, he got yelled at by someone who wasn't even with the Indivisible group, but they got dragged into the complaint somehow? We can see why Carlton wouldn't talk to the reporter, and referred her instead to Doug Taylor, Labrador's spokesman at the home office in Meridian.

Taylor explained contacting the Capitol Police was exactly what Carlton should have done:

The exact nature of the "threat" wasn't specified, but Tim Barker, another member of the same Chamber of Commerce subcommittee, explained Carlton "didn't feel like the Lewiston Police Department was assisting how he wished they would have," which seems like a good reason to call the Capitol Police. Ah, but now we start getting into Rashomon territory, because Lewiston Police Chief Chris Ankeny calls Carlton's worries "unfounded":

"There was individuals there that were protesting in front of the offices there and making the employees feel uncomfortable," Ankeny said. "No crimes had been committed. They just felt uncomfortable based on some of the national attention that these protesters had raised."

Subject-verb agreement issues aside, it sounds to us like Carlton may have overreacted a tad. Still, just to be on the safe side, Ankeny did add patrols of the area near Labrador's office, where so far the scary old folks have not been observed to be engaged in any rowdyism, contretemps, riot, or hoopla. "People have the right to protest as long as they're not committing a crime," Ankeny explained. Yes, even in Idaho.

Still, says Taylor, it could be dangerous, if suddenly a bunch of terrorist Olds showed up to do some First Degree First Amendmenting, since Labrador's Lewiston office is only open by appointment, and sometimes Carlton is the only staffer there:

"That can be a bit (of a) precarious situation, to be alone and to have threatening people showing up in your office," Taylor said.

Not that any of that happened, but you have to stay vigilant. This being godforsaken Idaho, it's a wonder no one has gotten shot yet, since the Second Amendment clearly trumps the First.

In addition to terrorizing Labrador's office staff by felonious existing, the Indivisible bunch has also made weekly visits to the Lewiston offices of Senators Jim Risch and Mike Crapo, where the staff haven't had any complaints. That, or they've seen the living hell experienced by Carlton, and the codgers have the senators' staffs cowed so that they describe the visits as "cordial" or even resulting in "a good discussion."

As of yet, no local militias have offered to guard the congressional offices, so the chance of actual mayhem remains low.

Yr Wonkette is now ad-free! Help us stay that way with a generous donation, and we won't sic a timid congressional staffer on you.