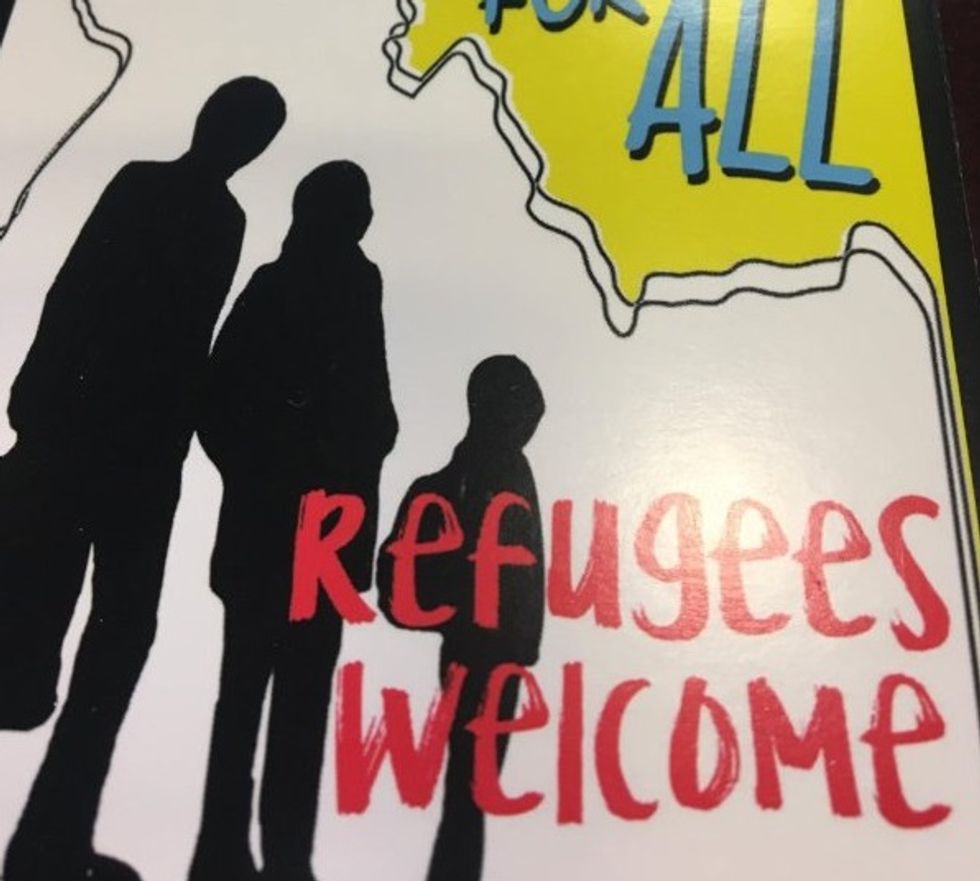 A reminder there are more decent people than idiots. The idiots are just louder is all.

In late April, we were delighted to report that alleged human Alex Jones is getting his conspiracy-loving butt sued by the Chobani Yogurt company over online posts falsely claiming the company was "importing migrant rapists" who had brought a surge of crime and disease with them to Twin Falls, Idaho, where Chobani operates the world's largest yogurt factory. Jones had a fine video meltdown, claiming Chobani's lawsuit was obviously orchestrated by George Soros, who of course is behind everything that happens anywhere. Jones said he was informed of this by sources in the White House and Congress, because obviously the federal government is highly interested in a dairy company's defamation lawsuit against a crazy person on the internet. Jones also claimed he would soon visit Idaho to show everybody what's really going on here:

And that was about the last we heard of that. He may still show up, but we're not betting on it; while Jones does have fans here among the militia loon segment of the population (we saw a guy with a homemade "InfoWars.com" sign and a camera at the big March for Guns' Feelings a few years back), we were delighted to see this piece from the Los Angeles Times about folks in Twin Falls who are happy to see the Chobani lawsuit, and wish Alex Jones would stop lying about their town and refugees. It's a reminder that while the Gem State does indeed have a noticeable constituency of far right looneybirds, we're not about to let the crazies run everything.

Twin Falls has long been a destination for refugees, since at least the 1970s, taking in people displaced by whatever horrifying events have driven them from home. Cambodians, then Bosnians, Rwandans, and more recently, Iraqis, Afghans, and now Syrians. It's a welcoming town, all in all, with a highly successful refugee center at the College of Southern Idaho (CSI), which helps resettle between 150 and 300 refugees a year in Twin Falls and other Idaho communities. Yes, there have been marches by gun-humping militia idiots who are terrified Idaho will be taken over by dozens of Syrian immigrants, but those guys are pests, not the mainstream. The paranoids tried to start a ballot initiative to close the refugee center last year, but of the 3,842 signatures needed to qualify for the ballot, they only got 855. Probably because George Soros kept people from signing the petition.

Rightwing blogs went crazy with stories of a 'gang rape' by 'Syrian refugees' that turned out to be mostly paranoid rumor. So when authorities clarified what happened, obviously that was part of the cover-up, too.

The latest hysteria -- mostly outside Idaho, of course -- comes from claims by Jones and by Dead Breitbart's Home for Nativist Panic that the Chobani plant, one of the major employers in the area (the factory is just outside Twin Falls, if you want to get picky) was somehow connected to an awful 2016 sexual assault committed by some young boys -- aged 14, 10 and 7. The assailants pleaded guilty in juvenile court, but the Wingnuttospere is certain that raping little girls is something that all Muslim refugee children just do, because of course they're animals, while when white Christians molest children, they're aberrant sickos.

Now if we can convince Alex Jones the barbecue sauce is out to get him...

Jones refused to remove an April 11 InfoWars video suggesting that the Chobani plant was somehow complicit in the assault, and also that refugees were responsible for an explosion of crime and disease in Idaho, including a nonexistent tuberculosis outbreak:

“TB spiked 500% in Twin Falls during 2012 as Chobani opened the plant,” Jones read during a segment on his Infowars program. “The blessings just continue. Seven refugees with active TB sent to Idaho when they know they got it.”

Except for how nothing of the sort happened, according to the Idaho Department of Health, which emphasized that in mere reality, refugees are actually screened for health, because things have not become more lax than they were at Ellis Island in 1904:

“Idaho typically reports about 10 cases of active TB each year to the Centers for Disease Control and Prevention, with one or two from the refugee community,” the agency said. “There are five cases being treated in the state today, but none are refugees.”

But that's a lot like what Jones said, because it included the words "refugees," "tuberculosis," and numbers.

Now let's get on to the actively nice part of how people are reacting to Jones and the lawsuit. Take, for instance, Zeze Rwasama, the direcor of CSI's refugee program, who is himself a refugee, a survivor of the Rwandan genocide. Rwasama says Twin Falls is a model for how communities can take in refugees precisely because it's a small city, even though it's 89% white. The size of the community is actually an advantage, particularly since there are established refugee groups and employers who are happy for the labor:

“Integration is faster here,” Rwasama said. “They get a job, a place to live and then, perhaps most importantly, a car. Buying a car means they are fully independent.”

All that happens, he says, because there are plenty of jobs in Twin Falls and the cost of living is affordable. Twin Falls’ unemployment rate is 3% and the median house price is $149,000. Chobani, which is hiring and is one of the top five employers in the Magic Valley, has been starting people at $12 to $15 an hour.

There's also several dairy farms in the area (we'll leave aside for the moment the very real environmental and animal welfare concerns involved with agribusiness because we'd rather not spend all day writing this piece) which need relatively unskilled laborers, and don't have an immigrant visa program to bring in guest workers. Bob Naerebout of the Idaho Dairymen's Association, would far rather have refugees than insane conspiracy theorists, who don't know beans about milking cows:

“The refugee labor pool is absolutely critical to the dairy industry,” Naerebout said. “Without them, it would be real trouble.”

He says average wages for refugees on a dairy farm start at $11 to $12 an hour. At one of the largest dairy farms in the area, 60 of the 220 workers are refugees.

Like others in Twin Falls, Naerebout is frustrated by the broad brush painted by Jones and others who never bothered to visit the area or talk to people who interact with refugees on a regular basis. He’s glad Chobani sued Jones to protect the company’s reputation and, by extension, the image of the area.

It's like what Kurt Vonnegut almost said: God damn it, you've got to be kine.

And then there's Fathe Noori, who worked as a translator for the U.S. Army in Afghanistan and then came to the U.S. to escape the Taliban. He says there have been a few minor misunderstandings, like a local teacher who tried to push Christianity on his kids (you know, just to save their hellbound souls, as the schools are meant to do), but all in all, he thinks most people in Twin Falls are wonderful. Yes, there's been some graffiti at the mosque, and a group of five protesters who were marching around with anti-Islamic signs on mosque grounds. But he points out it was a Christian neighbor who called the police to have the protesters moved off the mosque's property.

build a community where all residents are welcomed, accepted, and given the opportunity to connect with each other without bias in pursuit of common goals[.]

While the resolution doesn't specifically mention refugees or immigrants, it had its roots in a Boy Scout project that worked with the refugee center, and much of the public comments were about immigration -- and yes, there have been plenty of phone calls complaining that even being "neighborly" is far too radical, and will lead to Sharia law. Also, big surprise: One of the two council members who voted against the resolution said her calls had been 80 percent against the measure, while a member of the majority estimated his calls had been 60% in favor. Vice Mayor Suzanne Hawkins didn't like the resolution at all, and said it would be best to simply let “citizens reach out to those who they feel more aligned with.” She seems nice.

The resolution didn't mention Alex Jones at all, which is about the degree of attention he deserves.

HARK neighbors! This is your open thread!

Yr Wonkette is supported by reader contributions -- please click the "Donate" linky to help us buy dinner at the new Ethiopian place in Boise.