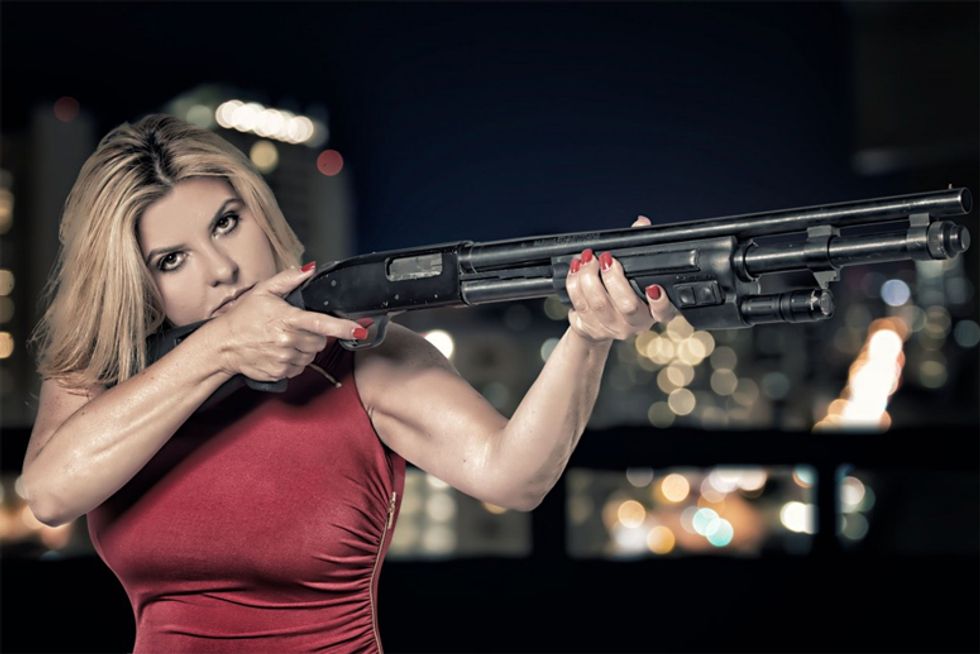 Of all the broken-braineded local politicking idiot teabagger ladies, Michele "That's One L" Fiore is our favorite. She's an assemblywoman in Nevada, and she came onto the scene just as Michele "The other one L" Bachmann was breaking our hearts by leaving Congress. Now, we thought Iowa gal Joni Ernst was our replacement gift, but she doesn't castrate hogs on the Senate floor near enough, and besides, her name isn't even "Michele." So maybe the lesson is that when God closes a Bachmann door, he opens a FIORE window.

Because, HEY-O, Fiore's running for Congress! To find out if she's the True American Congresslady of Your Dreams, let's look at some of her greatest hits.

You got some boobs? You got some guns? You like to pose your boobs and guns together, in calendars? GREAT.

Michele does those things! She has a new pin-up calendar to fight for the Second Amendment, and also, we guess, her modeling career. She SAYS the suggested $25 donations don't have anything to do with her own congressional run, but who knows. Here's Miss February:

And here's Miss October. It's Halloween-themed!

And here's Miss May. Surprise, it's Michele Fiore again, with a gun!

This is all just so #America and so #freedom.

But keep those boobs covered up. Don't want no transgenders peepin' at your "nakedness area."

Know who SHOULDN'T buy Fiore's calendar? Transgenders. She's got a real problem when she goes into the gym to do her exercises, and there's a transgender in the locker room, staring at her "nakedness area." And if a transgender woman has a penis, Fiore doesn't want to be forced to stare at it, which is a thing that happens in locker rooms, the old forced genital staring competition.

Can the "federal government" even "own land"? Uhhhhhhh.

Oh yeah, Michele had her nakedness area ALL UP in the Cliven Bundy federal land rights foofaraw. It's not that she doesn't recognize the authority of the federal gubmint, she just questions it, is all.

She introduced a bill to kick the federal government out of Nevada, and then she got downright cussy when people made fun of it. She was just trying to stop tyranny, goddammit!

(Why she's running to be a part of the federal government, in Congress? We don't know. Maybe she wants to flush all the badness out of it from within, the way she does with the cancers.)

What the holy fuck did you just say about flushing out cancers?

Cancer sucks, and that's why Michele Fiore wants to reform end-of-life care to give people better access to the known medical treatment of flushing it all out of your body with baking soda.

Oh, and did you know cancer is a just a fungus? Yep. So what you do is, you mix some baking soda into your morning coffee, to start the flushing process, and then you put a plumber's snake up your naked butthole (WHEN THE TRANSGENDERS AREN'T AROUND), and you start sucking out that fungus.

Don't you hate it when people use Prozac and gun-free zones to commit mass killings?

Because that makes sense! The Oregon mass shooter's online screen name mentioned lithium! We should do studies to see if that's why he shot everybody! SHUT UP, IT WAS NOT ABOUT GUNS.

Know what IS about guns? Miss April, in Michele Fiore's sex calendar:

Let's solve campus rape by giving all the college girls guns too!

Jesus. Yes, she is for real. No, she is not kidding. Yes, she thinks arming all the co-eds will stop all the campus rape, even though conservatives think the very idea of a "sexual assault problem" on college campuses is mostly made up. No, we can't even.

The Blacks? Don't even get her started!

Fiore doesn't want to hear blah blah voter ID disenfranchises black voters or anything like that. Did you even see that the president is a black? Uh, pretty sure that means racism is over, CASE CLOSED. Moreover, she stated in a hearing on voter ID laws that this one colleague of hers was the first "colored" in his family to graduate college. In conclusion, she's tired of people playing the "race card" because do black people even exist? Pshaw.

"Ooh, I can solve sex trafficking, pick me, pick me! We can cut people's balls off now?"

See, we told you Fiore was God's real replacement for Bachmann. Joni Ernst is just teasin' everybody cuttin' balls of pigs. Fiore has a plan to castrate HUMANS! You see, if you just round up all the pimps and cut off their balls, they will stop sex trafficking, because pimps can't do sex trafficking without their testicles, SHUT UP, IT DOES TOO MAKE SENSE.

Of course, if pimps can't get boners, they might end up real mad and do sex trafficking even more, to spite Michele Fiore, but that's neither here nor there. She would just like to cut some balls off, that's all.

We rest our fucking case.

Is that enough? Are you playing M*A*S*H with your name and her name right now, on the back of your Trapper Keeper during study hall?

THOUGHT SO. She will be the best congresslady of all the congressladies, unless she loses, in which case God owes us another replacement, YOU HEAR THAT, GOD?