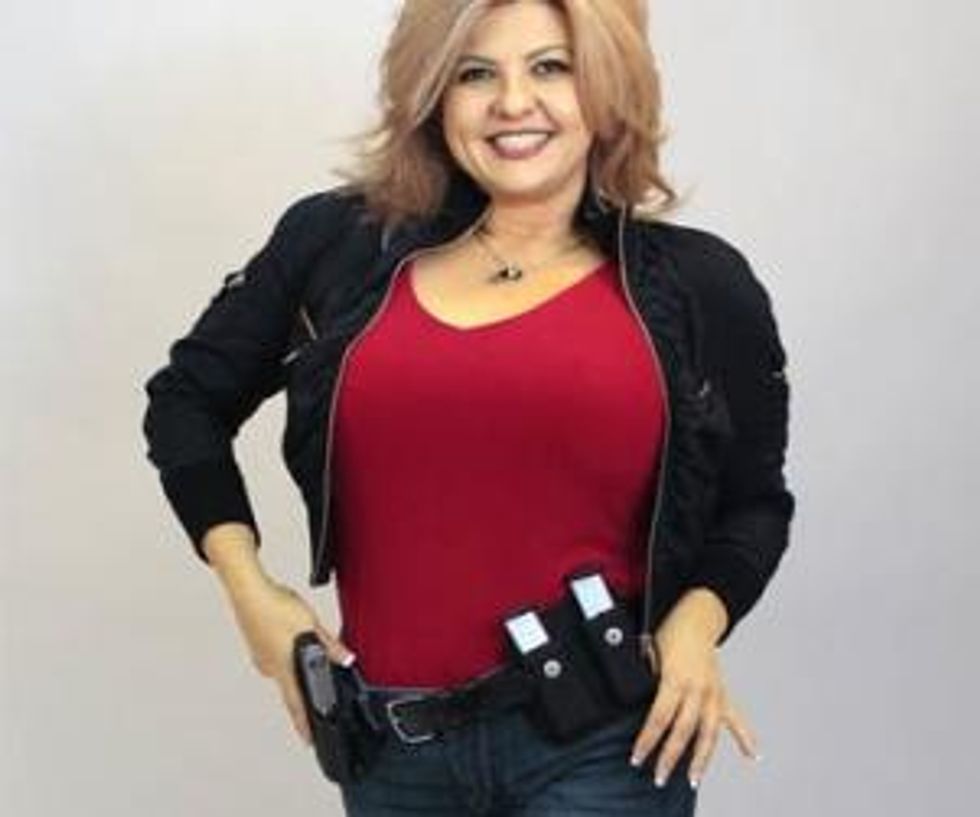 We have absolutely no patience for dumb people who have special braindead ideas about how to cure cancer or AIDS or stubbed toes or anything else, so let us throw to the wolves (YOU, rabid Wonkette commenters!) Nevada Assemblywoman Michele Fiore, because she is a dumb dick, if there ever was a template for "dumb dick," like if Mavis Beacon was trying to teach you how to type "dumb dick," it would involve typing the letters of Fiore's name over and over until you get it right, KEEP PRACTICING, YOU WILL GET IT:

Oh. Sweet. Lord!  We wish we had known that it was that simple before all the people died of cancer, OUR BAD, sorry we didn't think of the whole "baking soda solution!" What would have happened if the Stand Your Ground Glamour Shot Nevada Representative depicted above was present to advise our doctors about how to use things she found on Pinterest to Solve Cancer? No more tears, that's what!

Maybe next time we will tell whichever relative who is currently having cancer at the moment to just eat all the Arm & Hammer stuff they can find, maybe we could mix it into some kinda lovely omelettes or something, and just trust that it will do its magic.

Oh, also, Michele thinks that cancer is a "fungus," because that was one of her Smart Thoughts that just hit her, in between when she took a wee-wee and went night-night:

As first reported by Jon Ralston, Fiore told listeners: “If you have cancer, which I believe is a fungus, and we can put a pic line into your body and we’re flushing, let’s say, salt water, sodium cardonate [sic], through that line, and flushing out the fungus… These are some procedures that are not FDA-approved in America that are very inexpensive, cost-effective.” The American Cancer Society warns that while cancer patients whose immune systems are weakened by high doses of chemotherapy can sometimes contract fungal infections, “there is no evidence that antifungal treatment causes the patients’ tumors to shrink.” Cancer Research UK dismisses the claim that sodium bicarbonate (baking soda) can cure cancer as a debunked “persistent cancer myth.”

Wonderful. Just throw a snake through there, like a plumber, and the cancer fungi will just wash away. You are the best, Michele, thanks for your assistance.

Should we read further in the nice Think Progress article? Why not, we are a glutton, let's go:

Fiore added that Nevada is already “the capital of entertainment” and this bill could help “make it the medical capital of the world as well.”

OH, see, you can go to Las Vegas and get all capitaled up on entertainment, and then stop at the end of the strip and get un-cancered. You know what stays in Vegas? CANCER STAYS IN VEGAS. Anyway, yes ma'am, go on:

Weeks after being removed from her position as Republican Majority Leader over allegations of more than $1 million in tax liens, Fiore made news last Wednesday for her assertion that “young, hot little girls on campus” need to be armed with guns to prevent themselves from being raped, saying that every citizen should “have the right to defend him or herself from sexual assault.”

Well dang, Ding Dong has PROBLEMS. We thought Michele Fiore was going to be our New "Michele with one 'l'" Hope, who would single-handedly save us from the tyranny of disease or something. Instead, she is fixated on those hot sorority girls, who need so many guns, and so therefore, she is destined to become one of Wonkette's favorites, and we cannot wait, because we have writtenabout herbefore.

Also, Wonkette has met "fungus," and cancer is no "fungus," and it does not judge people by the color of their skin, or apparently by the content of their character either, cancer is just an asshole, in general. It is not AT ALL racially transcendent. Michele should probably stop saying things about it, unless she wants everybody to judge the content of HER character as "dumbass." Wait, too late.