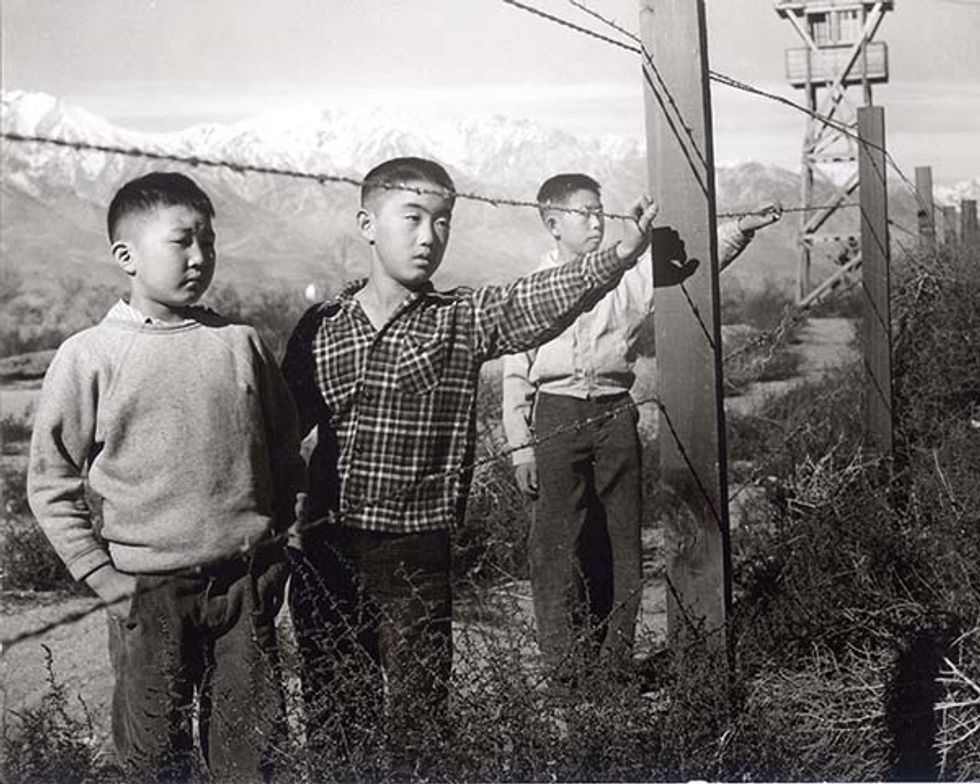 On Novembber 27, the Los Angeles Times Travel section ran a story about how not all National Park Service locations are places with trees and camping; some are all historical-like, such as two locations of former internment camps for Japanese-Americans on the West Coast who were ordered to leave their homes under FDR's notorious Executive Order 9066. It's a nice standard travel piece about how the Park Service attempts to curate history for visitors, with a nice quote from Myron Floyd, a professor at North Carolina State University, who said the Park Service is dedicated to preserving such places because "these are places or histories of national significance [....] These aren’t just sites of Japanese American history or African American history. They are sites of American history.

Well! A couple of readers did not care for the article's suggestion that the internment of tens of thousands of Japanese-Americans, most of them U.S. citizens, was in some way not a good thing, so they wrote remarkably pissy letters to the editor, published Sunday, that the Times now says "did not meet editorial standards" and will be addressed quite soon by their Readers' Representative, which is just Politically Correct talk for an ombudsman, bud. We have a feeling both of the unhappy readers were especially triggered by a line suggesting a visit to either camp, Manzanar or Tule Lake, "couldn’t be timelier," a clear slur against the president-elect and his perfectly reasonable desire to suspend rights for Muslims. Let's see what those upset readers have to say!

attached herself to the “I feel-good” contingent that feels sorry for the Japanese here in World War II [...] But this is just another anti-U.S. remake of history.

Oh, dear! The travel writer and the National Park Service hate America! How can we tell? Well, you see, it was all about being cautious around The Enemy, or at least people who looked like The Enemy:

Remember, this was war for the life of our country. The Japanese had a clear way to land invading forces in California but lost their chance because they did not realize it.

Hmm. Except for how Imperial Japan's entire reason for attacking Pearl Harbor was to eliminate the United States' ability to interfere with Japan's territorial expansion in the Pacific -- they miscalculated badly, but there was never a serious threat of invasion, and not even American military leaders feared invasion of the mainland. Attacks, sure. Invasion, not even back then.

Japanese have an extremely strong attachment to family, and even more so back then. First-generation and, to a lesser extent, Japanese here would have been expected to follow the wishes of their elders in Japan. Some, most or almost all might have refused, but the threat was there.

Isn't paperback sociology a beautiful thing? Then, to prove there was nothing at all racist about the order rounding up Americans of Japanese descent, Hawes explains it was all for the Japanese-Americans' own good!

Had the Japanese been left on the streets of our city they would have been subject to hostility, injury and death at the hands of other citizens whose emotions ran high.

The U.S. government needed to concentrate on the war effort, not keep track of every reported espionage claim leveled against the Japanese.

Wasn't that nice of "us"? Hawes closes with a jaw-dropping reversal of historical reality: By being interned, Japanese-Americans on the West Coast were actually huge patriots, helping out with the war effort, and instead of whining about being victims, they should shut up and be proud of how they gave up their silly "rights" for the greater good:

Virtually everyone in the U.S. was assigned jobs to help the war effort. The Japanese were assigned the job of staying out of the way and not causing complications. Millions of Americans were assigned far worse jobs. Hundreds of thousands were wounded or died.

The interned Japanese were housed, fed, protected and cared for. Many who now complain would not even be alive if the internment had not been done.

I salute the Japanese for doing the part they were assigned during the war as I salute all those that sacrificed for the war effort. I have zero respect for those trying to rewrite history just to make themselves feel good.

Thank god people like Steve Hawes are out there to prevent the distortion and revision of history. Mr. Hawes should also write a sternly worded letter to the Ronald Reagan presidential library protesting how Reagan signed a bill issuing an apology and reparations to the internees out of some misguided, anti-American attempt to make himself feel good.

Then there's Dick Venn, whose opinion on matters historical can probably be dismissed straight from his first paragraph, where he recommends a book by Bill O'Reilly as somehow relevant to the internment camps:

Maybe a little bit of balance in Miranda’s article would have been appropriate. You need to read "Killing the Rising Sun: How America Vanquished World War II Japan" by Bill O'Reilly and Martin Dugard to get the balance.

As the U.S. was putting families into the internment housing and feeding them, the Japanese were slaughtering Filipinos by the tens of thousands and U.S. soldiers after hideous torture.

War is evil, but I would have much rather been interned by the U.S. in California than by the Japanese in their captured lands.

George Takei Tells How He Was Sent To An Internment Camp At Age 5. And Somehow It's Not Horrifying!

Hey, maybe we stripped Americans of their rights under the Constitution, but once more, we still fed them. We bet George Takei has never considered how lucky he was that his family only lost their property and freedom, because after all, they were fed and housed -- and the U.S. Government didn't even bill them for it after the war! Anytime the United States is slightly less brutal to its own people than some enemy dictatorship, like Imperial Japan or ISIS, then we are clearly the moral victors.

Frankly, people like Mssrs. Hawes and Venn appear to have no appreciation whatsoever for the freedoms afforded by the U.S. Constitution, and to prevent their pernicious ideas from spreading, we think they and their families should be rounded up and placed in custody. It'll be fine. We'll feed them.