If Ann Coulter Has To Hear About The Jews One More Effing Time ... 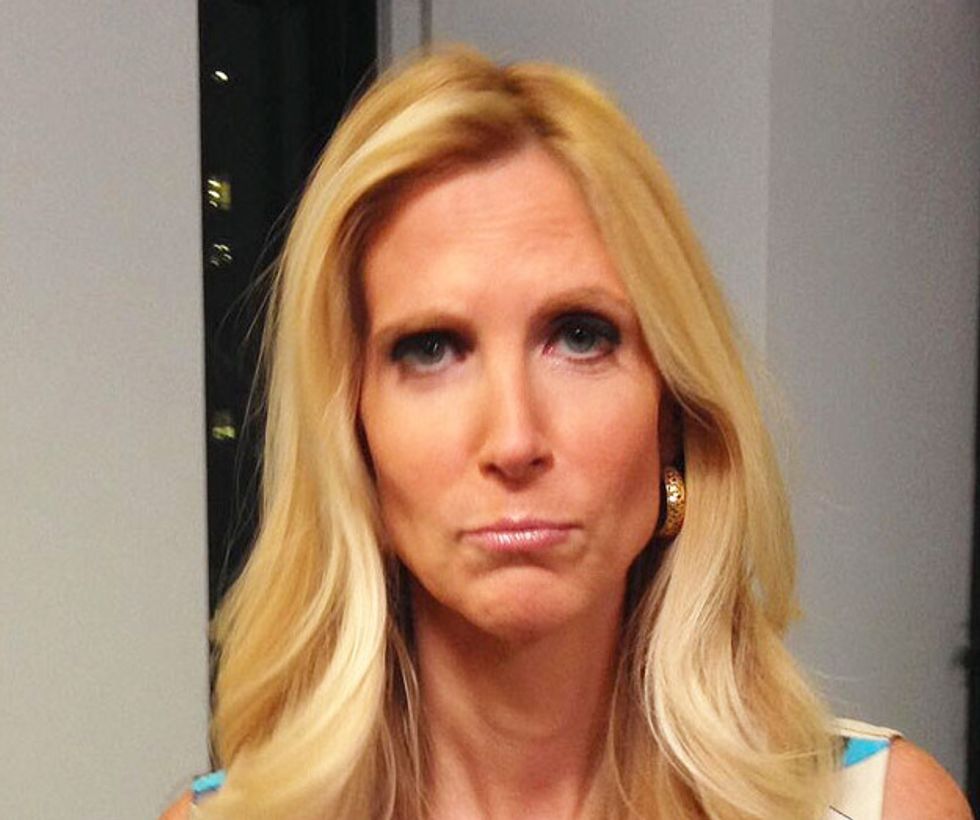 Ann Coulter is having another one of her emo moments, y'all. She's so sick and tired of all these yucky brown immigrants coming in and taking away her American way of life, and she knows Donald Trump is the only chance we have to keep things white, blonde and Christians-only in America.

[wonkbar]<a href="http://wonkette.com/599650/can-someone-please-come-and-collect-ann-coulter-anyone"></a>[/wonkbar]And now some British journalist on BBC Radio 4, James Naughtie, is fucking BOTHERING her, trying to get her to defend her vicious racism with things like "facts" and "logic" and "some shred of evidence of a thought process," ughhhhhhhhh. Why can't she just go back to the old days when she was America's Top Bigot and she made millions just for drunk-splooting words out and calling them "books"?

COULTER: Americans don't WANT immigration! They don't want any more! Why can't we have a home? Everybody else can have a home, you see, you know, National Geographic, and oh, the indigenous people and they love their home, "I'm going home!" No, we're the only people on earth who aren't allowed to have a home!

Poor Ann Coulter, thumbing through National Geographic and getting jealous of all those indigenous Africans and Asians. Sure, they might be poor, but at least somebody loves them and they look "at home." Poooooor Ann Coulter.

NAUGHTIE: But you're a country of immigrants ...

COULTER: No, we are not!

NAUGHTIE: If someone had said that about Jewish immigration into New York a century ago ...

Why must the mean limey Englishman ask her about the Jews so much! She was having a great day and then boom, SOMEBODY SAID "JEW."

[wonkbar]<a href="http://wonkette.com/594022/of-course-jew-hating-scum-queen-ann-coulter-is-terrible-but-shes-right-this-one-time"></a>[/wonkbar]Ann Coulter is an anti-semitic swamp turd. This is well established, going at least all the way back to that time in 2007 when she told Donny Deutsch that everybody should be Christian, and that Jews just need to be "perfected" by accepting Jesus Christ into their hearts, just as He so obviously lives in hers.

But we think, this time, Jews get the privilege of being a little better than Muslims, in Coulter's wise estimation, because at least they have the common courtesy to be white, most of 'em. Congratulations, Jewish people! You see, when darker-hued people come to America, Ann notices it, man. They're like right there in her face, BEING DARK. She doesn't see the Jews as much, except for when she notices how they're not "perfected."

But GODDAMN, don't fucking bring them up to her and act like Jews coming to America fleeing persecution, war and death are anything like Muslim refugees coming to America fleeing, ahem, persecution, war and death. It's not the same, dammit, and if you think it's the same, then you're just one of those Muzzie-loving liberal traitors. Either that or Ann needs to adjust her meds AGAIN.

The rest of the interview is Ann bitching about people who make her press "1" for English, how Trump WILL TOO build a Mexican border wall because he's such a "master developer," Mexicans are rapists, Ann making jokes she thinks are funny but then nobody laughs, Muslims are terrorists, Muslims are all on welfare, Ann Coulter needs another happy pill, STOP TWISTING HER WORDS, and then this gem:

We must stop the onslaught of Britishes illegally swimming across the Atlantic Ocean, setting up their royal families, eating shepherd's pie and constantly saying "Pip pip, cheerio, and all that rot!" LIKE WHAT LANGUAGE IS THAT EVEN?

It's over. We're gonna be homesick for the rest of our lives, 'cause America's gone.

Having said that, Ann rolled her eyes, did a line off the kitchen counter (ALLEGEDLY!), pulled out an old National Geographic and pretended all those dudes wearing gourds on their weenuses were her boyfriend, who loves her very much and built her a hut she could call "home."