If Donald Trump Was Your Dad, You'd Have Taken Him To The Neurologist By Now 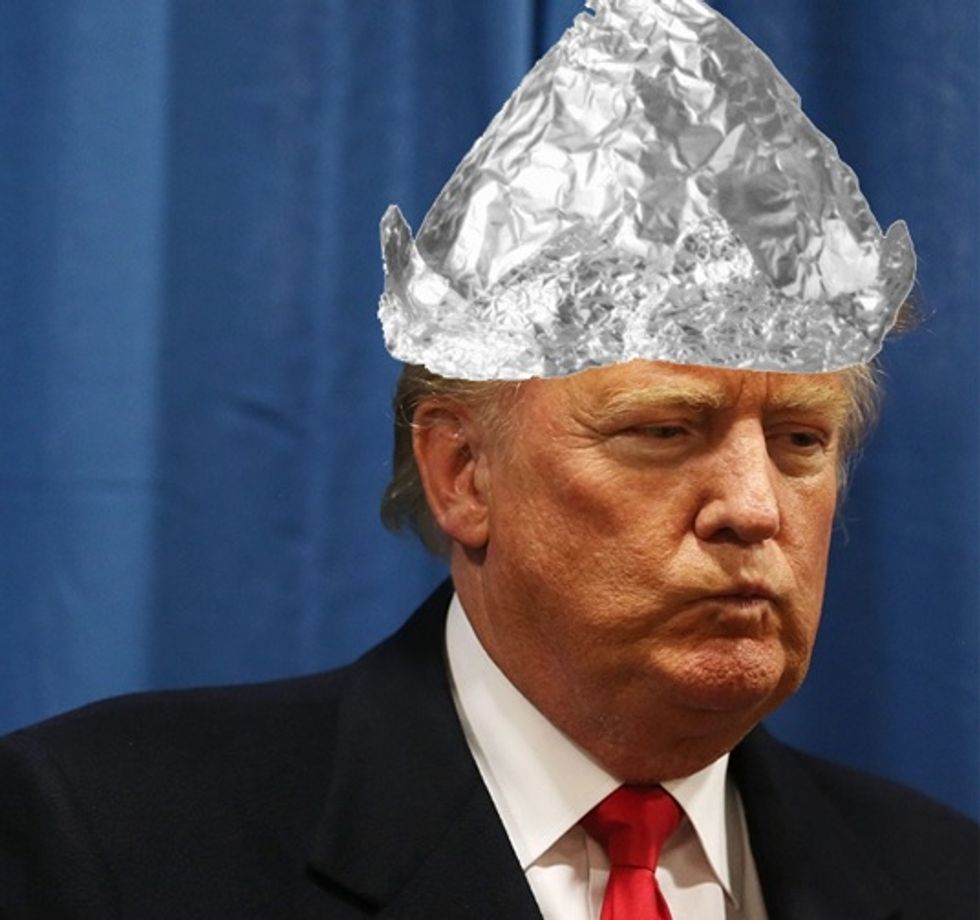 Let's not beat around the bush here. Donald Trump is FUCKING CRAZY. If your dad said half the loony shit he does, you'd have taken him to a neurologist months ago. Republican sycophants are going to swear on a stack of bibles that he's just a little rough around the edges, and he's not familiar with the ways of DC. And the MAGAhadists will say they like him because, "He tells it how it is!" Which is utter nonsense, and we shouldn't put up with it. DONALD TRUMP TELLS IT HOW IT ISN'T! And we need to point it out, because the president's mental faculties are clearly in decline.

Put aside the content of this tweet for a second and let's just talk about the weirdass syntax.

The Fake News Networks, those that knowingly have a sick and biased AGENDA, are worried about the competition and quality of Sinclair Broadcast. The “Fakers” at CNN, NBC, ABC & CBS have done so much dishonest reporting that they should only be allowed to get awards for fiction!

I know we're all getting used to it, but why does the president use random quotes and capitalization? You know who typed like that? The fucking Unabomber! Only that guy could actually spell.

Here he is conditioning foreign aid on other countries policing our "Weak Laws" border, which is NOT HOW IT WORKS.

The big Caravan of People from Honduras, now coming across Mexico and heading to our “Weak Laws” Border, had better be stopped before it gets there. Cash cow NAFTA is in play, as is foreign aid to Honduras and the countries that allow this to happen. Congress MUST ACT NOW!

Check out the fact that you can’t get a job at ratings challenged @CNN unless you state that you are totally anti-Trump? Little Jeff Zuker, whose job is in jeopardy, is not having much fun lately. They should clean up and strengthen CNN and get back to honest reporting!

Thank you to Rasmussen for the honest polling. Just hit 50%, which is higher than Cheatin’ Obama at the same time in his Administration.

Then he closed out the morning by telling some outright lies about Amazon and accusing the "P.O. leaders" of complicity in a scheme to defraud US taxpayers.

I am right about Amazon costing the United States Post Office massive amounts of money for being their Delivery Boy. Amazon should pay these costs (plus) and not have them bourne by the American Taxpayer. Many billions of dollars. P.O. leaders don’t have a clue (or do they?)!

Does he even know that all seven of the slots that he's entitled to fill on the USPS Board of Governors are currently vacant? No, of course he doesn't. Because he's fucking demented! He's an old man hollering at the teevee that back in his day, stamps cost a nickel. Why is Grandpa Simpson running the country?

How Do You Say 'National Fucking Humiliation' in Latvian?

After the McDonald's wrappers had been cleared away, an aide helped him into his pants -- why do his pants look like that? -- and Trump shuffled downstairs to meet with the leaders of Latvia, Lithuania, and Estonia, three former Soviet states trying to maintain their independence with Vladimir Putin breathing down their necks.

Trump got the ball rolling by congratulating the Baltic states on the 100th anniversary of their independence. Does he get that there's a giant, 51-year Russian asterisk on that anniversary? Probably not, since he went on to say that it would be so awesome if he and Putin could become BFFs.

But getting along with Russia would be a good thing, not a bad thing. And just about everybody agrees to that, except very stupid people. Okay.

Later at the joint press conference Trump insisted that he's really BRINGIN' IT to Russia by ratcheting up military spending and drilling for oil in the Arctic.

Nobody's been tougher on Russia than I have. And you can -- and I know you're nodding yes, because everyone agrees when they think about it -- strong energy, the United States.

My opponent was into other forms of energy, like windmills. We're -- we're very strong on energy. We're essentially, now, energy-independent. We're an exporter of energy. That is not a positive for Russia. But it's certainly a positive for the United States.

We're sure the Estonians feel totally reassured that you're axing subsidies for renewables. That'll really help them next time Russian hackers try to take out their digital infrastructure.

Luckily the Russian awkwardness was cut short because Trump veered off into his usual crazytalk tangents. There was CARAVAN and WALL and CROOKED HILLARY and lamentation that we didn't steal Iraq's oil after the war. Plus he was on again with that nonsense about NATO "dues":

And again, NATO has taken in billions of dollars more because of me, because I said, “You’re delinquent, you’re not paying,” to many of the countries. Is that right? Many of the countries weren’t paying. And even now, Germany is paying 1 percent and they’re not even paying the full 1 percent. [...]

With all of that being said, because of me — and you can speak to the head of NATO, Mr. Stoltenberg; he said that because of what I’ve said to the countries, they’ve taken in general, I think you’ll confirm this too — many billions of dollars more than they would have had if you had crooked Hillary Clinton as President. Okay? That I can tell you. Many billions of dollars more.

Angela Merkel splained him already in small words that NATO requires each country to spend 2% of their GDP on military, that the targets have been extended to 2024, and that these are NOT DUES. But Trump doesn't get it, because he's a demented old fool who believes what he believes, and it doesn't matter what facts you shout at him.

Our trade deficit with China is $375 billion, and yet he repeats over and over that it's $500 billion. Where did he get that number? Dunno! Did it jump from the pile of scrambled eggs between his ears to Fox News, or vice versa?

Look, we get that you're not supposed to diagnose psychiatric problems from afar -- and anyway we are not a mental health professional. But something is VERY WRONG here. Republicans are standing behind a raving lunatic pretending he's a stable genius. And we need to stop going, "Oh, that's just Trump being Trump." The man is out of his fucking gourd, and we need to start saying so!