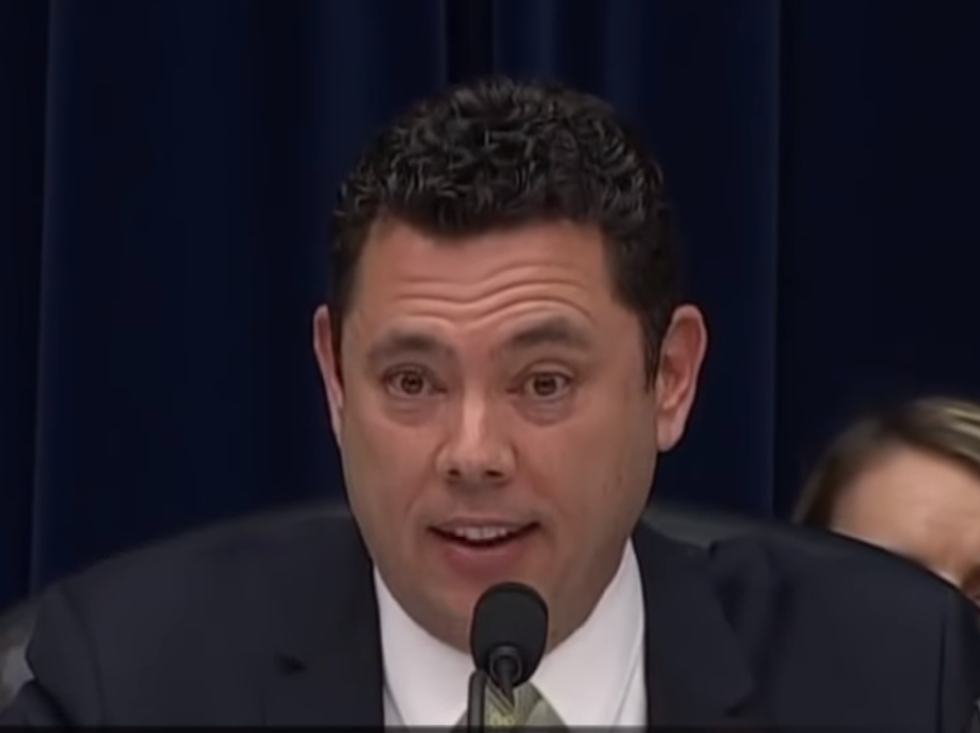 According to The Hill, part of the reason Chaffetz may be leaving Congress, on top of his desire for everybody in Washington to stop doing enemas to him, and also the lack of open Hillary investigations, is that he's far too poor to swing life in DC on a congressman's $174,000/year salary, while also having a mortgage and a family back home in Utah, two kids in college, and a third kid who will go to college in just a few years. He even suggests congressfolk should get a $2,500/month housing stipend, so they don't have to sleep in their offices or share bunk beds with other congressfolk who are also very poor. Chaffetz says this might even save taxpayers money, because he wouldn't always be buying plane tickets so he can fly home to Utah on the weekends for Traditional Mormon Boning with his wife, instead of curling up in the fetal position on the floor of his office in DC and crying himself to sleep about what his face looks like:

It “would allow the non-millionaires to participate and you would be able to have your spouse join you here,” said Chaffetz, 50, who’s spent 1,500 nights away from his wife and children during his eight-plus years in Congress. “If I wasn’t buying as many airline tickets, it would ultimately be less expensive.”

Hopefully his new Fox gig will help him with that little problem. Surely they will pay him better than a common pauper congressman's salary, at least until his face causes all the cameras at the Fox studios to break into one million pieces.

But honestly? Chaffetz might not be wrong about this. DC is fucking expensive, and as much as $174,000/yr. is a lot more than most people make, that money would vanish pretty quickly under the circumstances Chaffetz describes. And we do want regular non-gabillionaires to be able to run for office, and if the cost of living in the nation's capital is an obstacle to that, then maybe it should be considered!

But ... well ... ahem ... wouldn't that be kind of a ... HANDOUT? And isn't Jason Chaffetz sort of ... against those? We feel like Chaffetz has very recentlytold us that people have to make choices in life, like if poor people want expensive healthcare, maybe they shouldn't be running out and spending their millions of Poor Bucks on brand new iPhones all the time:

“You know what, Americans have choices. And they’ve got to make a choice. And so maybe, rather than getting that new iPhone that they just love and they want to spend hundreds of dollars on, maybe they should invest in their own healthcare.”

Ayup. Know who else had choices? Jason Chaffetz did. Maybe if he wanted a deluxe DC apartment, he shouldn't have spent all his Congress Bucks on brand new iPhones or education for his kids. Or wait, are handouts OK if you're in the top few percentage points of American income earners, but not if you're poor? Is that how this works? Haha, of course that is how this works. Have you seen the Senate's multi-katrillion dollar tax cut for wealthy people, which could be delivered by Senate Republicans for the low low price of "R.I.P. YOUR MOM?"

Like we said, Chaffetz's idea might not be all bad. We're just not sure if he's the best messenger for that particular message. But maybe if he's so concerned about opening Congress up to people who aren't rich, he could spend some time talking about that on Fox News with a bag over his head because let's be honest if they don't put a bag over his head everybody with eyes will be like "Oh fuck, my eyes!"

Wonkette is 100% funded by lovely folk like you! If you love us, click below, to fund us!