If Maggie Haberman's Hot Takes Get Any Hotter, We're All Going To Burn To Death 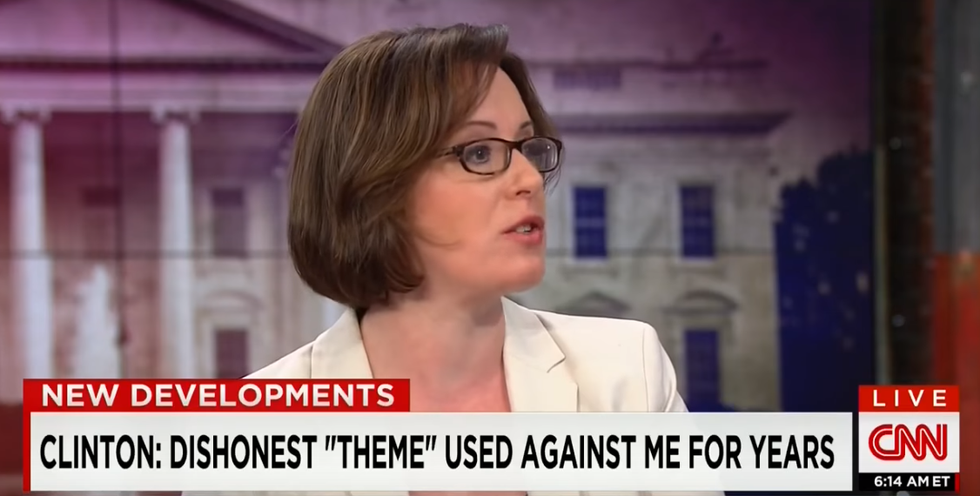 AGAIN? Yes, again. Earlier this week we had to lovingly and constructively criticize Maggie Haberman, like we often have to do to her colleague Glenn Thrush and Chris Cillizza and Chuck Todd and Mark Halperin and all the hacks that hack their way around Washington, jizzing themselves over access and reporting that Both Sides Do It. Last time it was because Haberman and her occasionally decent but mostly crappy newspaper the New York Times still can't seem to get their heads around how their pathological obsession with Hillary Clinton's emails was phenomenally shitty reporting, and did as much as anything else to put dangerous white supremacist freak baby Donald Trump, who seems wholly committed to destroying American institutions, including the Constitution, in the White House. Thanks, NYT!

On Wednesday afternoon, Haberman stepped in it again:

O RLY DOES HE?

Is that one of the things Maggie Haberman has learned about Donald Trump by using the White House access she pays for with tweets like this to listen to Trump squatting athwart his golden toilet and telling her what to think?

For the record, Trump reportedly isn't happy with HHS Secretary Tom Price, at least partially because of how he jets around on the taxpayer dime in private planes. Wasting taxpayer money is Trump's job, goddammit! But honestly, if Trump is really mad at Tom Price, it's probably because he outsourced all the "repeal Obamacare" work to Price, and meanwhile Obamacare's over here like "LOL, I'd like to see you try, OH WAIT YOU DID LIKE A MILLION TIMES, LOLOLOLOLOL YOU SUCK."

The replies to Haberman's tweet were many! A number of them included pictures like this, literal illustrations of how Trump ABHORS waste:

On Twitter, Brian Beutler was like "HMMMMMM, dunno 'bout your hypothesis there, Margaret!" and he provided links to how Trump's constant jetting to his godawfully ugly private properties costs the taxpayer billions of dollars, how the RNC is paying hundreds of thousands in legal fees for Trump, how the Secret Service is having to spend thousands of dollars to rent golf carts at Trump's Bedminster estate, on top of how it had to spend even more thousands to rent space at Trump Tower, you know, just to give a few examples Maggie Haberman might have missed in the newspaper.

Maybe she should subscribe to the Washington Post, just to make sure she doesn't miss any of these important stories.

Haberman was not deterred, though. Proven wrong by literally everyone, she doubled down explaining that WE are just not capable of comprehending her BRILLIANT BRAIN THOUGHT:

God, we must be dumber than Eric Trump (another waste Donald Trump defiantly flaunts), because we really don't. Her original argument was that Trump haaaaaaaates waste or the "perception of it." So, following her thesis, Trump would surely haaaaaaate how all sentient Americans are appalled by how he shits away taxpayer money to pay for his gold-plated sconces, and then shits away some more on his fucking golfing trips, and then wastefully flushes all that shit down his golden thunder-shitter.

Oh well, we guess is our point is that Maggie Haberman, with all her valuable White House access, is wrong as fuck. Again.

Of course, Haberman will probably not take this second instance of loving, constructive criticism from Wonkette very well. She's not a good sport like Glenn Thrush, who, again, THANKED US for setting him straight, lovingly. She'll probably just block us, because that's what she does to people who interrupt her peace by saying, "Excuse me, madam, but it's theoretically possible you have made an error!"

Yeah. Guess they are.