If Mike Flynn Pleads The Fifth, Will Congress Lock Him Up? 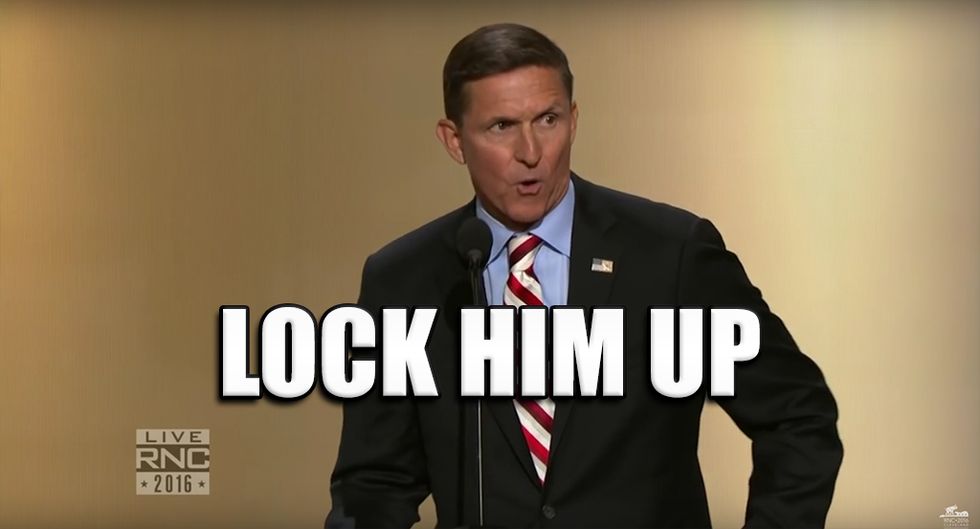 Would this guy lie?

CLUTCH THE PEARLS! General Michael "Lock Her Up" Flynn has invoked his Fifth Amendment right to shut the fuck up for once and told the Senate he won't be turning over those documents it subpoenaed from him two weeks ago. We are FOR SHOCKED that the guy who shouted, "If I did a tenth, a tenth of what she did, I would be in jail today!" turned out to be a big old criminal!

The guy could at least try to avoid winding up on an FBI "wire tapp" every damn time he breaks the law. Maybe instead of criming all the time, the General should switch to bowling, or sudoku, or filching bread from the kitchen and sculpting it into figurines using his own spit as glue. Because Michael Flynn is in deep shit. And since the Senate (and the House, and the FBI) already laughed his ass out the door when he asked for an immunity deal, he should probably start looking for a fun, new jailhouse hobby.

Within the past week, news emerged that Donald Trump regrets firing Flynn. He thinks Flynn is a "good man," who served his country honorably, with some exceptions. Trump even sent him a love note telling him to "stay strong," because Donald Trump DGAF about obstruction of justice. He'll be bragging about that shit to Lester Holt tomorrow!

So here is a partial account of Michael Flynn's international crime spree. A full list would probably crash our server, which is already GRRRRR CRANKY anyway.

Michael Flynn and his best pals

During the campaign and transition, Michael Flynn was having all the phone sex with Russian Ambassador Sergei Kislyak. But their relationship was on the DL, so Flynn left it out of his disclosures to the transition team and the FBI.

He also forgot to mention that he'd promised the Russians he'd lift those annoying sanctions imposed by the Obama administration after their Ukrainian funtimes. Ooopsie!

And who even cares about the paltry $45,000 he received to appear on Russian TV, right? Mike Flynn is a GENTLEMAN! He doesn't kiss and tell!

Flynn's amnesia extended to the $500,000 he was paid to lobby for the Turkish government as well. Which is one hell of an extension! Luckily, he left little a trail of breadcrumbs for federal investigators.

Like an election-day piece in The Hill titled "Our Ally Turkey is in Crisis and Needs Our Support." And finding a roomful of witnesses to his “open-ended thinking on the subject” of kidnapping Turkish cleric Fethullah Gulen and handing him over to Erdogan's goons.

And telling Susan Rice on January 10 that the US should NOT go ahead with its plan to arm the Kurds and take Raqqua back from the Islamic State. Sure, Mike Flynn hates ISIS. But not as much as his Turkish employers hate the Kurds, so the invasion got nixed.

So, Cage Match in the Senate, Right?

FLASHBACK — Mike Flynn: “When you are given immunity, that means that you've probably committed a crime” @MeetThePress pic.twitter.com/yJanur7NSl