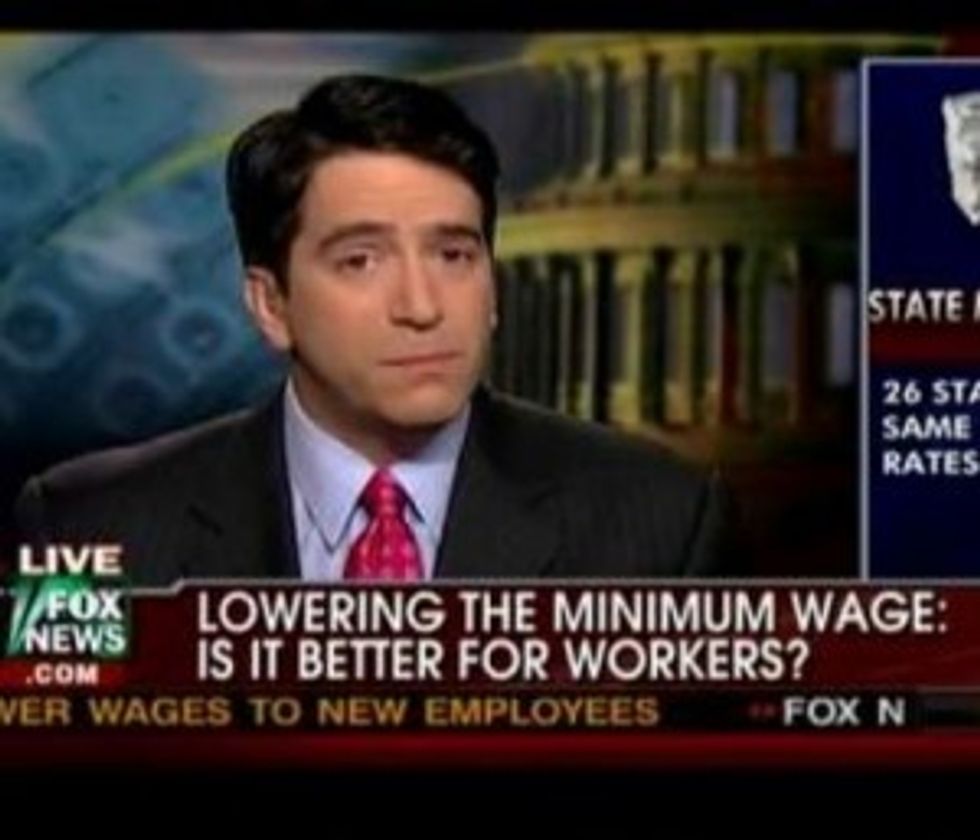 In Tuesday's State of the Union address, President Obama pointed out that you can work for 40 hours a week at minimum wage and still live in squalid poverty, and suggested that we raise it from $7.25 to $9 per hour by 2015, and also index it to inflation. This, of course, is Communism! This is becausewages are kind of like a tax on employers, and if you raise that tax, then employers won't hire anyone, and ergo defacto, $9 is MORE than $7.25. Also too, raising the minimum wage will not help the deficit, which is the most important challenge our country currently faces, really! In sum, the best way to help Poors is to not help them at all, the end.

Ha ha, just kidding, everything we just said is bullcrap, and raising the minimum wage will help lots of people start clawing their way out of being perpetually poor.

Worker advocates say that raising the minimum wage would help boost the economy by putting more money into the hands of lower-income Americans, who are likely to spend it. A 2011 Federal Reserve Bank of Chicago study showed that a $1 hike in the rate increases spending by $2,800 a year in households with minimum wage workers.

Look, CNN said "worker," which is to be expected of the Commie-liberal mainstream media -- the preferred term is "consumer," which is more neutral, but whatever, the point here is that when people have more money, they spend more money, which helps the economy. Also, fun fact: the minimum wage has lost almost a third of its value since the Reagan era (shocker):

The federal minimum wage has lost 30% of its purchasing power in recent decades, according to the law project. If the minimum wage had kept pace with the cost of living since 1968, it would now equal $10.56. The White House says that raising the wage to $9 restores its inflation-adjusted value to where it was in 1981.

Now, the Real American media will probably start pointing out sooner or later that you can live JUST FINE on the current minimum wage! Poors can heat and store food, and sometimes they can look at the internet, therefore how bad can it really be? Also you can live on rice and beans for WEEKS to save money -- Sean Hannity claims to have "friends" who do this all the time! (Sidebar: we do not know which part of this is harder to believe: the fact that Sean Hannity has friends, or the fact that Sean Hannity has friends that are so poor that they live on rice and beans for weeks at a time. Both of these things sound like bullshit.) But anyway, rice! beans! microwaves! The Poor are doing GREAT on minimum wage, right?

No, of course not, this isn't right. The median monthly rent in L.A. in 2009, for example, was $1049. At the current California minimum wage of $8, you would just have to work for about 135 hours (or over three weeks of full time work) to pay rent. In Manhattan, where the minimum wage is $7, a worker would have to work for over 350 hours to afford the median rent of $3200.

Of course, we all know that Poors technically don't deserve to live in Manhattan, but not the point! The point is that our pinko president has noticed that $9 can buy more things than $7.25, and CNN said the word "worker," so check to make sure there is no Communist under the bed before you go to sleep tonight.