If Your Husband's Not Gay, He Was The Other Night (TLC Teevee Review!) 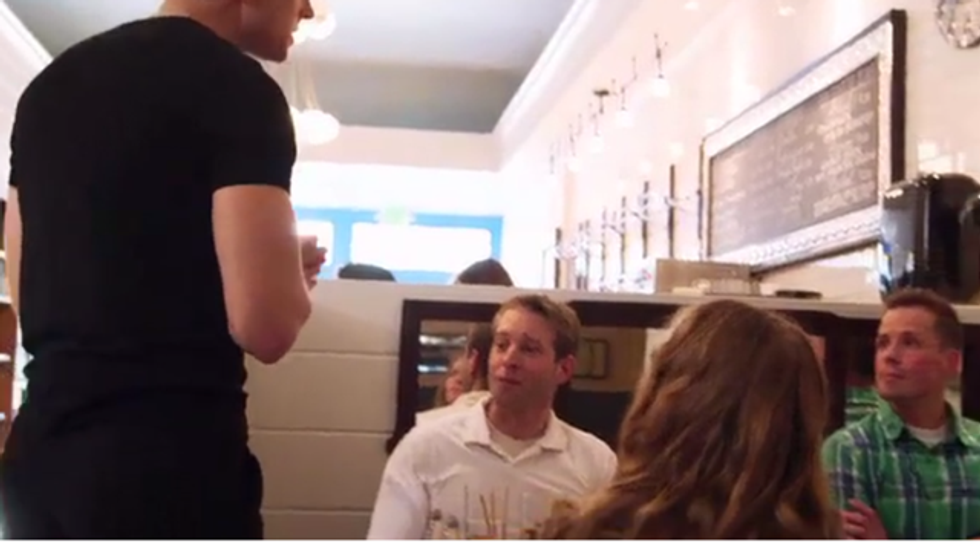 Over the past few weeks, there has been a bit of a hubbub over a teevee program on the educational network TLC by the name of "My Husband's Not Gay." Due to its depiction of Mormon men who freely admit that they are really into the nude male body, but yet are married to womenfolk, activists claimed that the show sent harmful messages to LGBT youth about a false choice between spirituality and sexuality, and a petition asking TLC to cancel the program garnered over a hundred thousand signatures. TLC did not cancel the program, because they are America's preeminent educational teevee network, desiring nothing more than to teach Americans about these Mormon gay dudes, who are not gay.

The show was marketed and sold as a look at some innocent Mormon people who, because of their faith, are simply choosing not to act on their demon urges to have sex with menfolk, but the truth is that the stars of the show are well-known "ex-gay" activists:

It is ... disappointing, if not unethical, that the reality show’s subjects were falsely portrayed as normal Mormon families.

In reality, they are hardcore anti-gay political activists. Several of the show’s subjects were staff members at the now defunct “ex-gay” organization Evergreen International and currently work on behalf of another such group, North Star.

One of the subjects, Pret Dahlgren, was recently deposed as a witness in a Southern Poverty Law Center (SPLC) lawsuit against the “ex-gay” organization, Jews Offering New Alternatives to Homosexuality (JONAH). In this role, Dahlgren spoke in favor of discredited reparative therapy, which is compared to child abuse and is banned from being inflicted on minors in California, New Jersey, and the District of Columbia.

[Jeff] Bennion identifies himself as a co-founder of North Star, and he has written quite publicly in defense of ex-gay therapy. In 2013, he wrote an op-ed in the New York Post defending JONAH, a Jewish ex-gay ministry that had been sued by several patients under consumer-fraud laws. (That suit is ongoing.) Bennion lauded sexual orientation change efforts (SOCE) as part of his own therapy, “all aimed at helping me better manage my homosexual attractions within the context of my value system.” In fact, he credited SOCE entirely for his ability to “experience how fulfilling sexual expression can be for me within the confines of a lifetime commitment to a woman.”

Not to get too deep into the rabbit hole here, as we have dick jokes to make, but that lawsuit against JONAH involves "ex-gay" counselors making their clients take their pants off and hold onto their junk in front of the mirror and stuff. You know, typical therapy sessions. That's what Jeff 'n' Pret were speaking out in support of, probably because they're not allowed to fulfill their desires to hold junk in any healthy sorts of ways, due to the Mormon Truth that every time a guy touches another guy on the Down Theres, Mormon God knocks a continent off the planet they all get when they bite it.

The fact that these dudes admit that they want to have many kinds of sex with men is immaterial -- because these people can no longer claim that therapy changes anyone's sexuality, they're rebranding. Gone is "I prayed away the gay!" and in its place is "I have SSA but I assure you I really want to have sex sometimes with my wife." "SSA" stands for Same Sex Attraction, and they bandy the term about like "SARS" or "TLC."

And before you go feeling too sorry for the wives, you can rest secure in the knowledge that they're involved in these "ex-gay" organizations as well, so your pity, while lovely, is unnecessary.

So, that all being out of the way, let's get to the fun part. How gay for men are these dudes, really? I wanted to know, so while all the rest of you were watching the Golden Globes or the NFL Playoffs, I was watching the TLC to find out the answer. (Actually, that is a damned lie, I watched it last week because I got an advance copy due to Important Person -- when the show aired I was drinking beer and watching basketball.) The result? It was the gayest hour of television I have ever seen my entire life. I am sure they were hoping that they would come off as a buncha brahs who just happen to suffer with the SSA, and that somebody in America would take their message seriously, but that's not what happened.

I'll introduce you to the characters and explain to you some of the important parts of the program now:

: Jeff and Tanya are kind of the Main Couple of the show, and the main takeaway is that Jeff is the creepy, skeezy one. He is pictured above, flirting with a waiter at a restaurant and stealing glances at said waiter's wang. During a memorable moment in the program, Jeff announces to his wife that in a couple of weeks, he and some of the boys are going on a camping trip. Sad trombone plays as Tanya reminds him of what happened "last time." Jeff explains to the camera that one time (just one time, we are sure) a few years back, there was a sleepover -- because all straight guys in their 30s have sleepovers -- and things got "out of hand." I don't want to presume, but I think they were talking about constant gay sex, from the moment they got there until they heard Wife open the garage door. In a Nightline interview that aired a few days before the show, Jeff explained that his attraction to men is like his attraction to delicious donuts, whereas his choice to have sex with his wife is like eating healthy food so you don't get fat. You can't eat donuts all the time, you see. It's best to have them on camping trips and during sleepovers, I guess. For this reason, though, I have nicknamed Tanya "Sprouts." Look at Jeff 'n' Sprouts in this interview:
Evan Hurst