Illinois Gov. Rauner Halts 'Non-Essential' Spending Except For His Wife 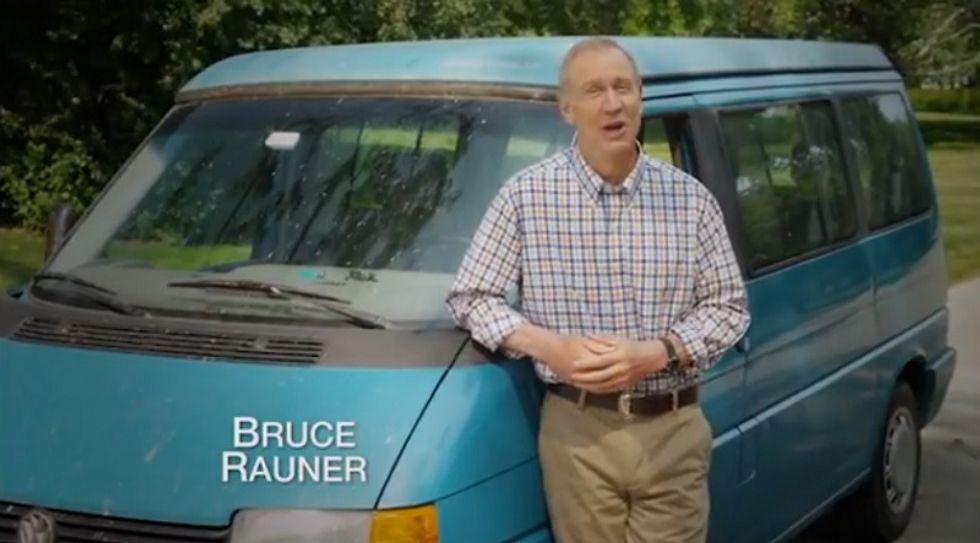 Pretend Populist and Actual Uber-Wealthy Bully Bruce Rauner is your new governor, Illinois. So all you working stiffs better take notice because your days of making reasonable compensation in consideration for your labor might be numbered. After all, the state is facing a gigantic unfunded pension liability in the neighborhood of 80 to 120 $Rauners.

Rauner, whose campaign pushed the narrative of a meager man plugging away for the people from his headquarters in the back of a Eurovan, should know a lot about Illinois' pension situation. For years, Bruce and his ilk squeezed exorbitant management fees through government connections and by convincing pension boards that paying them millions to spin the roulette wheel was a better way to go than a $5 Drinking Bird with an E-Trade account. Rauner then skirted SEC regulations to receive campaign donations from firms handling Illinois' pension funds.

Now Bruce gets his chance to fix the mess. Will there be some outside-the-box thinking? Possibly some changes to the nation's 5th Most Regressive State Tax Structure? Well, if you're talking about making Illinois even more regressive with magic tax cuts for rich people, he's probably on board. But first he has to trot out Chapter 1 of the GOP Executive playbook and villainize his employees for working for the government instead of being venture capitalist Creators who are astute at investing in companies that outsource their labor.

At the University of Chicago’s Booth School of Business, Rauner used strong rhetoric to warn salary cuts could be on the table for  state workers, arguing their salaries in Illinois were too generous.

The average? $64,000 in 2012. Rauner is attempting to build consensus for a budget that he has repeatedly emphasized will mean everyone must sacrifice.

$64,000. Per Bruce, we don't only get to blame the pensioner with the nerve to expect deferred compensation that was promised. We can also blame the 20-year veteran of the Department of Agriculture who's single-handedly breaking the budget and deterring outside investment by having the nerve to make enough money to send two of his three kids to college (sorry Jenny!). This is no way to earn a living. Follow Bruce into the breach, and he'll make every Illinoisan filthy rich so we'll all have nine houses and the ability to grease the wheels of bureaucracy to get our daughters into Chicago’s best magnet school with only a $250,000 donation and Arne Duncan's personal intervention. We'll all be governors!

In one of those sweet gimmicks that ungodly rich people do when they get elected to office, Rauner is taking a $1 salary. He's so incorruptible and selfless. Also, his first act as governor was to freeze "non-essential" state spending, which makes the subsequent hiring of a $100,000 Chief of Staff for the First Lady kind of a head-scratcher.

Rauner spokesman Lance Trover laid out the duties for the new hire, saying the chief of staff “oversees the staff at the executive residence and will serve as the first lady’s liaison to the governor’s office, the Legislature, and the City of Springfield.

In addition to the essential nature of Ms. Rauner going all Mary Todd Lincoln over the Executive Mansion, it's expected the First Lady will get to meddle in education policy. In fairness to Ms. Rauner, she has long worked with groups providing early childhood programs, though one could wonder if her continued work with an organization that gets a big chunk of its budget from state grant money is appropriate.

Her husband, on the other hand, had no qualms banking off the shady for-profit college industry and has funneled millions into state charter schools. As Rauner has relentlessly attacked unions and the greedy teachers whose pension funds his company managed for only tens of millions of dollars, tea leaves suggest that charter schools will be a big part of the governor's "essential" agenda despite the fact that, for instance, Chicago's burgeoning Charter School movement is a total underperforming boondoggle.

Which is perhaps why the Rauners had to pull so many strings to get their daughter into a (gasp!) unionized Public School.