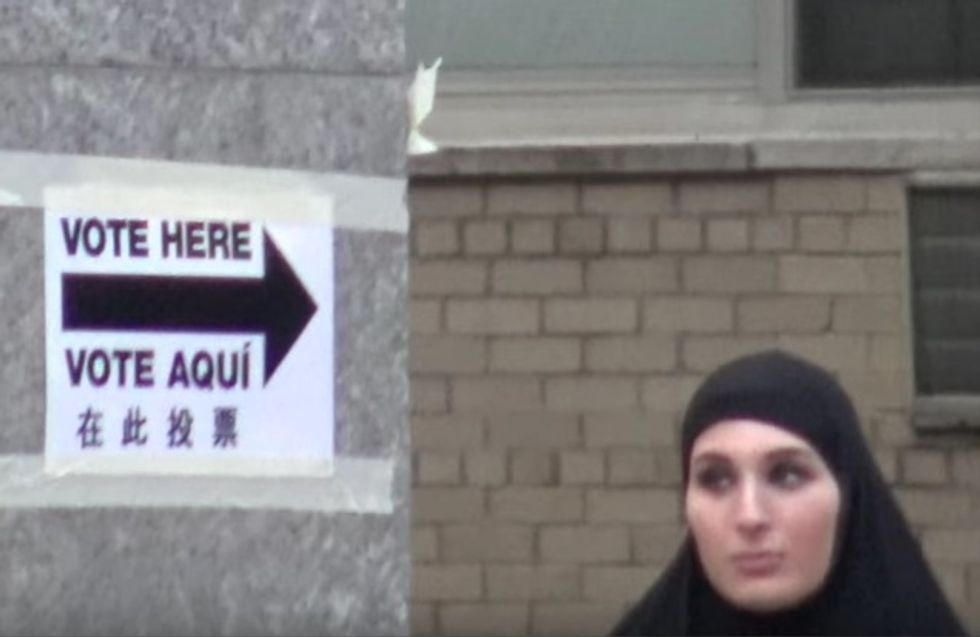 Wow, this is hot undercover journalism! An "undercover journalist" with James O'Keefe's "Project Veritas" (Latin for "unintentional irony") went to a New York polling place wearing a "full burqa" -- the woman pictured above is wearing a hijab, which does not cover her face, but supposedly the "journalist" in the video had her face covered as well -- and requested a ballot for "Huma Abedin." Like a liberal fool, the foolish poll worker, after not finding the name in the precinct's voter list, offered her a provisional paper ballot, which the "journalist" wisely didn't vote with, since that would have been fraud. This is shocking proof, on video, that America's entire electoral system is full of fraud, since if someone is willing to risk being charged with a felony for impersonating another voter, they could indeed commit voting fraud!

Of course, it's a bit like "proving" bank robberies must be happening all the time by filming yourself going into a bank, asking a teller to break a twenty, then leaving, all the while carrying a note in your pocket that reads "This is a robbery. I have a gun. Also, my name is James O'Keefe." If you never show the note to the teller, you haven't committed a crime. If you do, you have committed both a felony and a clever Woody Allen reference, and chances are very good you'll go to the pokey, because most judges do not appreciate classic film comedies.

So here's the setup of the stupid video, since we can't blame any Wonkers who would rather walk barefoot across a hardwood floor littered with Lego blocks than watch a James O'Keefe joint:

In the establishing shot, we see the woman in the hijab while scary scary Mosque singing is played. Are you wetting your pants in fear of the voting jihadists yet? If not what is wrong with you? Then we get shots of the "journalist" going to what Project Demitasse says is "Huma Abedin’s polling location" and asking to vote under the name Huma Abedin. These are interspersed with quick cuts of another, wholly unrelated "secret recording" of Alan Schulkin, a Democratic commissioner on New York City's Board of Elections, "admitting" that there's probably just tons and tons of voter fraud, because those Muslims, you know, they can vote with their faces covered by burqas, and there's nothing anyone can do about it!!! So there's a second astonishing revelation: Democrats can be xenophobic jerks too.

So, umm, we're not sure we agree 100 percent with O'Keefe's investigative journalism work here: If this was really filmed at "Huma Abedin's polling location," why the hell isn't Huma Abedin's name on the voter list? The nice poll-worker lady looks at the rolls and says, "Since we don't have your name in the book, you can fill out an affidavit ballot, OK?" -- a line that by some miracle doesn't make it onto Project Wormy Ass's webpage with the dialogue between the poll worker and the fake "Abedin." This kind of matters, since the fake Abedin is being offered a provisional ballot that would only be counted after it was verified by elections officials, who would toss it once they saw the real Huma Abedin had voted at her real polling location (where we'll assume they have a record of her name). But instead of taking the proffered paper ballot and committing a felony, the "journalist" says she'll come back and vote later (after talking it over with her husband, "Anthony," HAW HAW), and the terrible fraud-abetting poll worker abets her fraud by cheerfully inviting her to come back, going so far as to tell her how late the polls are open, even though she's wearing a burqa!!!

Honestly, we would like to thank the nice poll worker lady for being exactly the kind of helpful volunteer who makes democracy work, for real. She deserves better than to be anywhere near these lying fakes.

So there's your "evidence" of rampant voting fraud by SCARY MUSLIMS IN BURQAS. The video is getting a lot of wingnuts all excited, as all of O'Keefe's videos do, since it confirms what they already know: The votes are RIGGED, even though so far 2016's most notorious case of in-person voting fraud was that idiot Trump supporter in Iowa, who voted at two separate locations because she was "afraid" her first vote would be switched by elections officials to a vote for Hillary Clinton.

It's almost as if she were a low-information victim of constant paranoia and propaganda. Strange, James O'Keefe hasn't put her in a video at all.