In Pentagon's Special Vietnam History, Everything Was Beautiful And Nothing Hurt 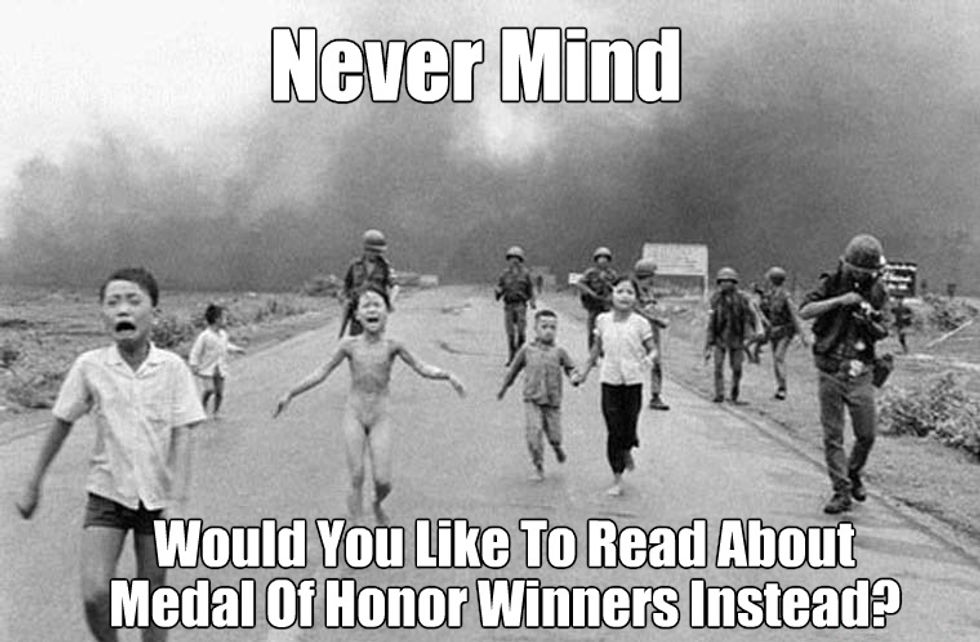 2015 is the 50th anniversary of the American deployment of ground troops to Vietnam -- oh, sure, there were "advisors" well before that, but March 8, 1965 was when we first sent in 3,500 Marines. And to mark the anniversary, the Pentagon has set up a really cool website, at the cost of a mere $15 million, which aims to honor veterans and commemorate their service. The site also prominently features an educational section whose goal is to

provide the American public with historically accurate materials and interactive experiences that will help Americans better understand and appreciate the service of our Vietnam War veterans and the history of U.S. involvement in the Vietnam War.

Oh, and as Sally Kohn at the Daily Beast notes, it also seems designed to "commemorate the Vietnam War by whitewashing it."

This is not a website that's intended to provide too many conflicting views about America's involvement in Vietnam. As Kohn says, it "largely describes a war of valor and honor that would be unrecognizable to many of the Americans who fought in and against it." Not that you'd expect the Pentagon to produce anything that would be mistaken for a website produced by the Yippies, but it's all shaded and nuanced to avoid many suggestions that the American effort in Vietnam was especially controversial. Some 500 historians, veterans, and activists have signed a petition against the historical distortions in the Pentagon's version of the war, including Daniel Ellsberg, who leaked the Pentagon Papers. Hey, at least the Pentagon Papers get a mention in the site's "Interactive Timeline" -- they're right there on June 13, 1971, with this exhaustive note:

The New York Times publishes the Pentagon Papers, a leaked collection of government memos written by government officials that tell the history of U.S. policy in Vietnam, even while it’s still being formed.

It's pretty exciting the way the website just makes history come alive like that! No mention of the Nixon administration's attempt to block the publication of the Pentagon Papers, or of the Supreme Court decision allowing their publication, or of what they revealed about the lies Americans had been told about the war. But they got the date right, so that's something.

On a similar note, the site's discussion of the Gulf of Tonkin incident rather blandly explains that on August 2 1964, three North Vietnamese patrol boats "engage the [USS] Maddox by launching torpedoes, each of which miss their mark," without noting that, in reality, the American destroyer had fired shots at the North Vietnamese craft first. The site notes, without any particular emphasis, that while the Maddox the USS Turner Joy reported a second attack on the night of August 4, "later analyses of those reports make it clear that North Vietnamese naval forces did not attack the Maddox or the Turner Joy that night." No mention, of course of the fact that the Johnson administration knew at the time that there was no second attack, or that the supposed two days of attacks were its justification to Congress for requesting that good old Gulf of Tonkin Resolution. You can, however, click on a photo of the actual Gulf of Tonkin Resolution, which then enlarges from the size of a postage stamp to the size of a much larger postage stamp.

And so on. The massacre at My Lai gets a whopping three sentences; the text notes that Lt. William Calley was "convicted of war crimes and sentenced to life in prison," but not, of course, that Richard Nixon pardoned him in 1974. Sadly, there's no mention at all of the true hero of the event, helicopter pilot Hugh Thompson Jr., who put himself and his crew between Vietnamese civilians and Calley's men to stop the murders. If there's anybody whose name should be remembered from that war, it's Hugh Thompson.

The timeline is quite meticulous, however, about providing the date of action for every recipient of the Congressional Medal of Honor. There were a lot of them, and each entry has a brief biographical sketch and recitation of the actions for which the medals were awarded. It's a nice touch for families, and these entries provide the most detailed history of any of the engagements in the timeline.

Other stuff gets left out, unfortunately. There happens to be an entry for June 8, 1972, the day that the South Vietnamese village of Trang Bang was napalmed by South Vietnamese air force planes and photographer Nick Ut of the Associated Press took one of the war's most iconic photos, of then-nine-year-old Phan Thi Kim Phuc running naked and burned from the carnage. Ut got the Pulitzer; Kim Phuc got 17 skin grafts and eventually gained Canadian citizenship, and Richard Nixon suspected the photo was faked. The timeline's entry for that date is purely coincidental and doesn't mention Trang Bang or Kim Phuc at all; instead, we learn this:

Have kids who are doing a history report on Vietnam? Skip the Pentagon's expensive waste of time and send 'em to Wikipedia. Or get your hands on PBS's Vietnam: A Television History (also available at your public library or Netflix). Or if they're in high school, hand 'em Tim O'Brien's The Things They Carried. That one's fiction, but it has far more truth in it than the Pentagon's version.