In The Spirit Of Holy Week, Everybody Hates Laura Ingraham And Her Dumb Shitmouth 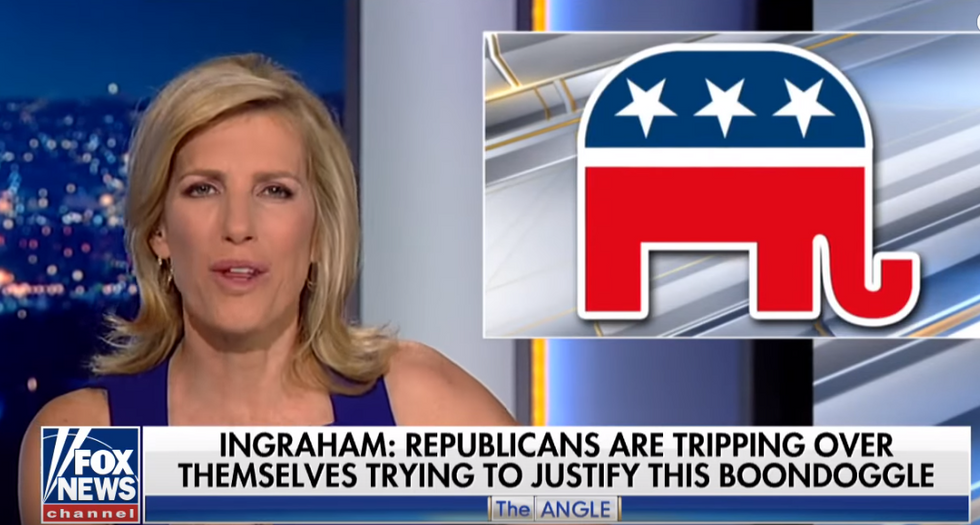 What boondoggle? The one your dumbass created FOR YOURSELF?

Hi! Three Laura Ingraham posts in one day! That must mean things are SLOOOOOOOOOOW in the news right now. (Not complaining, first time that's happened since 2016 we think.) We come to you with glad tidings of the FOURTH and FIFTH companies deciding they're just not that into Laura Ingraham, after she thought it would be a good idea to make fun of one of the Parkland shooting survivors on Twitter.

Rachael Ray's Nutrish dog food, TripAdvisor, and Wayfair had already canceled advertising on Ingraham's show. And now, even after Ingraham's VERY HEARTFELT APOLOGY, where she explained that "in the spirit of Holy week" (because this is the only week of the year Ingraham even feigns having a soul apparently) she was very sorry for being such a dick, which was very funny to us, because she only got "sorry" once advertisers started fleeing. And now Expedia has confirmed that it also pulled its advertising from the show, though in its statement to Huffington Post, it did not mention whether it made the move because of Ingraham's tweet about David Hogg, or whether it's just because Expedia already hated her because back in February she said LeBron James should "shut up and dribble," which is offensive because Expedia has posters of LeBron all over its bedroom wall, but Expedia forgot to cancel her shitmouth until today.

Oh yeah, Nestlé's out too, though its statement is kind of weaselly.

Hogg does not accept Ingraham's apology:

Hogg also tweetered a list compiled by Media Matters of ALL Laura Ingraham's sponsors, should you want to do BUT YOUR EMAILS to some companies.

So that is your happytimes Laura Ingraham Is Having A Very Bad Week update. Look for Fox News to be real emo the next couple of days about how their First Amendment rights have been murdered by the tyranny of some teenagers unleashing the Free Market upon them, and asking didn't the "Roseanne" revival prove that Trump Racist Trash Bag Human Lives Matter Too?

As for Ingraham, maybe this will make her call up her ex-boyfriend Dinesh D'Souza and cry a lot, because that's right, Laura Ingraham DID HETEROSEXUALS with Dinesh D'Souza, isn't that so gross? Perhaps D'Souza can D'tell her everything will be D'OK, after recounting a war story from his time as a political prisoner of Barack Obama, and she will be like "I bet I can find a way to blame this on The Blacks too!" and then they will make kissy noises into the phone at each other, because we bet they still do that all these years later. Once the phone call is over, Ingraham just might retire to her bathroom, whereupon she will say her affirmations into the mirror: "When life gives you lemons, make them THE MOST RACIST LEMONS EVER."

SPEAKING OF ADVERTISERS, Wonkette likes to remind you every now and then that we ain't got no advertisers and are 100% funded by YOU! This means a couple things, and one of them is that we don't have to pretend to be sorry like a common Laura Ingraham when we say something mean. Also? WE DON'T FUCKING PUNCH DOWN. That's kind of a thing. We punch UP! At the people in POWER! And we say their faces look like COW AFTERBIRTH. Because it's TRUE:

The other thing this means, though, is that when we say we rely on you 100%, we mean we rely on you 100%, and as things go with Mom 'n' Pop dick joke blogs, sometimes we have a little bit extra, sometimes we're a little bit low. If you are a human who loves Wonkette more than you love Laura Ingraham (we just described most of humanity), wouldn't you be so kind as to help us out with a little funding, or even a lot of funding, IN THE SPIRIT OF HOLY WEEK? We thank you from the bottom of our black hearts, which are actually really sweet and happy hearts, but don't tell anybody, we gots A IMAGE to uphold.

Click the donate button above! Or click the button below! And also too, you may have a happy OPEN THREAD, so that you have much time to click all the buttons. (Oh and by the way remember, drinky thing in St. Louis canceled tonight, because BROKEDOWN WONKEBAGO.)

Wonkette has NO COMMERCIAL SPONSORS AT ALL, and can say what the fuck we goddamn want. We just don't want to shit on gunned-down schoolkids for some reason, WEIRD.