In Which My Husband Takes Vicious, Belated Pleasure In General Sherman's March To The Sea 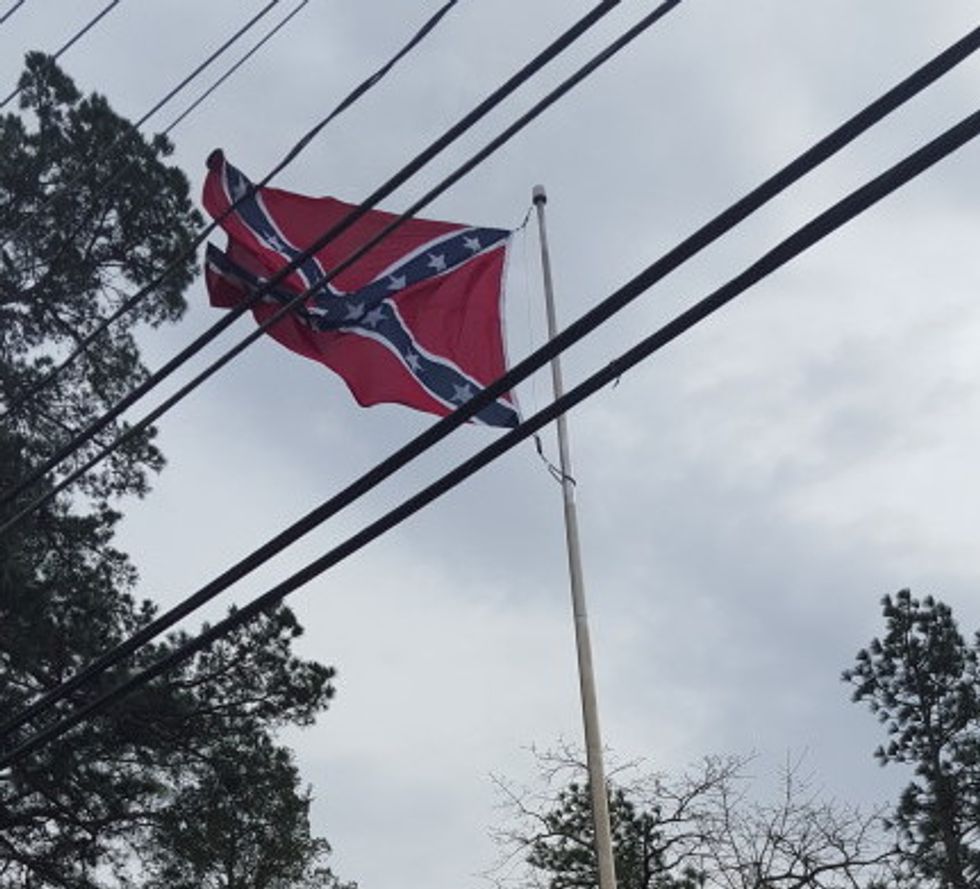 There was a methy, crunchy-faced man in the gas station, glaring fire at us. My husband let his testosterone rise, ready to strike like a viper, should the need arise, at the man he contemptuously described as "what all those Confederate punks looked like," while I snapped pictures of the massive slavery flag rising over the appliance parts shop next door.

If it were a romantic comedy, we'd eventually come to love Georgia. I guess. We would put a ring on Georgia, and move to Macon. But it was feeling more like a danse macabre, and we'd be ending up tethered together in the chicken coop.

An Internet pal caught us just in time to turn from Augusta to Athens, where he promised home-fried chicken and a new pie, so we turned onto 78, a little two-lane highway with rolling fields and hills. My husband didn't even see them; instead, "Stonewall Grill" was the first thing to catch Shy's eye. "I'm not eating anywhere named after these dead slaver fucks!" he growled. It was lucky we had people in Athens, then, or we would have starved. But my husband amended his thought: "I'd eat at the Fuck Stonewall Jackson Grill, if it were owned by black people," he relented. He took some cheer in that.

"Maybe the Stonewall is a gay bar!" I said, and he laughed for the first and last time.

Then we saw a plantation house.

There had been plenty of memoria to the Confederacy in Charleston, of course, but we breezed right by those. Instead, we'd gone with a compatriot Wonker to Sullivan's Island, where Stephen Colbert and maybe Bill Murray live, and where the graceful, gracious beach houses didn't look too much like they were built with slave blood mixed into the mortar, mostly because the houses were built out of wood. We'd eaten delicious fresh shrimp, and the baby loved grits, and we took ugly pictures with South Carolina's hilarious former governor and current Lowcountry congressman, that guy who was fucking that lady for Jesus.

this is just really a terrible picture

We didn't see a single banner of the Stars and Bars raised for "heritage." Charleston seems to have amended its ways in that at least, after nine nice people were murdered in church.

in which the baby, like the South, aggresses on the North.

But Georgia was a different story, with its mean-faced men, and its massive, sky-high boner for the "states' rights" to own black people, and its Stonewall this and fuck-you that. As we drove through those pretty hills, my husband took great and uncivilized glee ideating on Sherman's march to the sea. He knew he shouldn't, he said; he knew there were war crimes, he said; but these forests were chopped down by slaves to make fields, and the ditches were dug by them, and fuck these fucking fucks who moon over and long for their fucking heritage of GETTING TO OWN FUCKING SLAVES.

My husband takes it personally. His forebears were Kansas Free-Soilers, and 10 out of 12 of his great-whatever uncles died fighting these pricks. He takes pride in his people; he takes their actions as a reflection of his personal virtue. Just as these people must do, but they're taking pride in viciousness and idiocy. They're also taking pride in losing, and their South Will Rise Again.

When it does, my husband says, we'll put it back down. Tra la la, tomorrow is another day.

Are there unracist white people in the South? MAYBE. And are there racist people every place else? LOOKIN' AT YOU, BOSTON. But Shy could not get over this death cult of white Southerners longing for "gentility" and also "treason," raising their traitor flags while calling the rest of us un-American commies, saying "love it or leave it" when they're the only ones who have. While we're at it, fuck you too Daughters of the Confederacy, whitewashing the Civil War into "states rights" (to own people) and the "Southern way of life" (of owning people).

The only thing Shy left out in his ranting was calling these motherfuckers sister-fucking hillbillies, probably because that would be classist, and we are nice.

Which is a long way of saying that Atlanta, we're in you (Memphis, we'll be in you Tuesday night), and won't you come and meet us tonight, from 5 to maaaybe 8, at the Euclid Avenue Yacht Club? We even promise not to burn anything down. Probably. But were probably not moving to Macon.