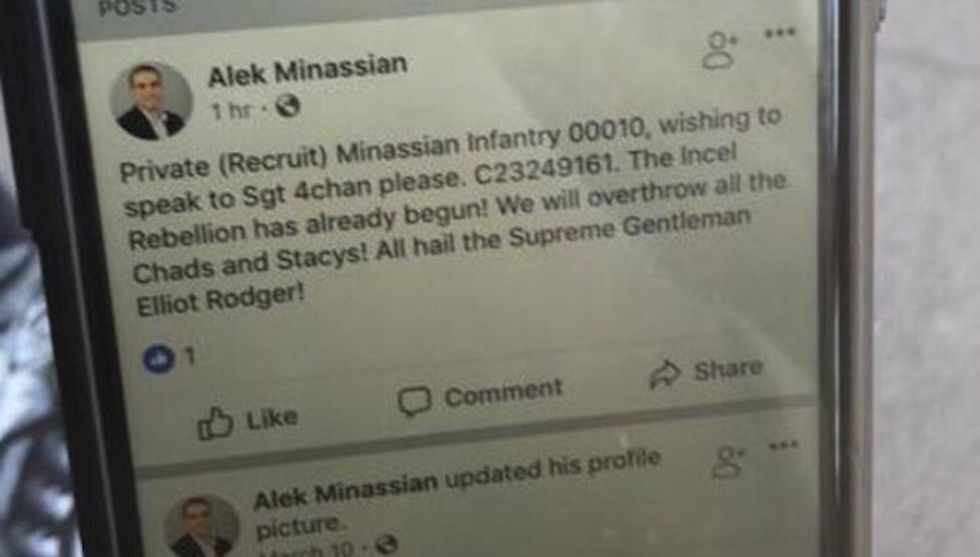 After much speculation on Monday on whether a Facebook post from mass murderer Alek Minassian, in which he declared himself an incel and praised Elliot Rodger, was real or a 4chan hoax, Facebook has confirmed to reporters that it is, in fact, very real.

Minassian is not only not the first man to commit a mass murder over his frustration with women, he is not even the first man this year to do so. It keeps happening, and each time it happens, these "involuntary celibates" cheer and cheer, thinking they are heralding in a Beta Uprising that will force women to love them out of fear of being murdered by one of them. You know, because that's definitely how love works.

For the uninitiated, and those who have not been keeping up with my The Week In Garbage Men posts on the weekends, incels are "involuntary celibates" who gather in a variety of online spaces in order to talk about how evil women are for not fucking them, and chat about how much they would like to murder and/or rape us.

In response to the most recent mass murder, one poster on incels.me said that he believed that this would result in people taking incels seriously and even siding with them:

I was going through the posts on this thread on reddit which is about the Toronto incident and while there are lots of numales, cuckfags and fembitches as expected, there also seem to be people who understand the issue and side with incels. Whether they are actually Incels themselves, will need more research to know but the bigger thing is that people will now at least understand that this isn't a joke. Other articles published by some sites about this incident also take a more serious approach towards the Incel issue.

With the rise of the stupid 3rd wave feminism, left and SJWs the West has become more and more cucked than ever. The effect are also beginning to seep into the East, at a slower rate though. But if this phenomenon continues and men continue to be sexually frustrated, depressed and isolated then society will get fucked in the ass. This can't go on forever. At a point things will have to flip. That might happen peacefully (men totally giving up on women and stopping betabuxing and chasing them and validating them like in Japan) or violently (going ER).

If 80/20 is real then that means 80% of men will be going to be affected by this shit. The top guys of that 80% might not care now but with the passage of time, as society becomes more degenerate, women become more hypergamous and deluded more and more men will become Incels, MGTOW or RedPilled. And these men are not going to be quiet. If the very gender that is responsible for most innovations, growth and development throughout the history of mankind is going to get angry, we will be going to see a massive fire rise.

Others in the thread agreed, suggesting that they, even the murderer himself is not to blame, but society is to blame for, I guess, them not getting laid.

You are correct. The killer was most likely not an incel (who knows though). However, the bigger picture is that it opens peoples' eyes about the dangers of hypergamy, feminism, and degeneracy. While I feel bad for the victims of an ER incident, I know the blood is on the hands of those who prey on low-value men (roasties, society, etc.), not me.

Hypergamy, for those not in the know, is a ridiculous manosphere theory about how women want to marry men that are higher up on the social food chain than they are. Betabux refers to another inane manosphere theory "Alpha fucks, Beta bucks" in which women have sex with "alpha men" and then use "Beta men" for their money. The irony of this theory, of course, is that they simultaneously pine for a pre-sexual revolution society in which women often had to get married for reasons of economic survival. Even if these theories did make any sense (they don't!), it is hard to imagine what it is, exactly, they want anyone to do about it -- particularly given the fact that they claim to not just want to have sex, but also to be loved and given affection. Do they want the government to force women to love them, against their will? How do they see this working?

One post, directed at people visiting the site, attempted to explain that incels are not "terrorists" and somehow only made things extra creepy by suggesting that they do, in fact, encourage each other to commit violent acts:

Inceldom is an identity, not a movement.

- Encourage people to copy these acts

- Give advice on how to do it

- Help them accomplish this in any way

What we do is encourage men to publically talk about and act out their frustrations. In severe cases, this could mean hurting others. We do not judge them for thinking that these acts are appropriate given their often traumatic life experiences.

Remember, we are the bottom of society, we face nothing but discrimation and contempt. No comfort and no sympathy is granted. There is no chance for us to get out of this place, our fate is sealed.

Our misery does not only come from being single or sexless. Many of us are completely socially isolated, bullied, harassed in public and mocked. This is what many people get wrong about incels. Not having sex is a huge part of our problem but not everything. An understanding partner would relieve a lot of our pain. But we cannot find one.

The "We do not help them accomplish this in any way" part is absolute bullshit, by the way. In my years covering this community, I've seen hundreds, if not thousands, of posts talking about the best way to go about mass murder or rape or to commit other violent acts, or otherwise justifying them as a perfectly reasonable reaction to not getting the romantic attention from women they so richly deserve.

In fact, in the same post, the author compares an incel running people over with a car to a starving person stealing bread.

To end it, let me ask you this, dear reader: if a normal, law abiding citizen is hungry, and neither the state nor society provide him with food, nor do they help him acquire food: Then imo he shouldn't be judged if he snaps and lashes out and take the food by violence or make those pay who withhold food from him, while having an abundance of it.

And if you think that this imaginary person is faulty for lashing out, that anger is not the answer, that his violence is to be condemned: I hope you will give me some bread when I'm starving. Just a bite to get me by, that would do.

I will be knocking on your door.

Except, Jean Valjean, women are not bread, or inanimate objects of any kind, so keep your murderous ass the fuck away from my door.

One particularly charming poster, BlkPillPres, wrote that while this was very nice, he would much prefer acid attacks, so as to force women to become "incel" themselves.

This shit right here is lifefuel for me and exactly what I was talking about, too many ER guys are using guns so its expected and they get taken down very quickly these days, not only that but having these killings only take place with guns makes normies feel safe. Since this guy used a vehicle now the whole "ban guns" spiel looks like retarded coping, you can't ban hatred, hatred is all it takes to go do a mass killing event.

This is literally what I asked for, finally somebody breaking the mold, next up how about a guy who breaks into a condom vending machine at night, pokes holes in all the condoms and closes the machine. I would love to see the end result of that shit, pure lifefuel. So many normie males will get trapped in unwated lives ;)

ER doesn't always have to be violent, it just needs to be strategic and punish normies in some way, they need to be in constant fear for EVERY ASPECT OF THEIR LIFE, killing normies from my perspective is kinda pointless but this is still good, I prefer acid attacks to mass killings though, wonder who is going to do a "mass acid attack". He will have zero kills to his high score but in my book he'd have beaten all the high scores by virtue of lives ruined and BLACK PILLS FORCED DOWN PEOPLES THROATS. All the normies who used to think "looks don't matter" will not get to test the theory lol.

This same poster, several weeks ago, published a "guide" on incels.me detailing his plans for getting away with a "mass rape" -- including who he'd target and how he'd get rid of DNA evidence.

Is it troubling how much I've planned this out? kek

I'm willing to bet there is already a serial rapist out there that is doing this for years and has never been caught because its so simple its genius. (This is just my opinion though on what I think is a full proof plan).

I won't post or link to it here. The poster actually said that he hopes it gets posted somewhere else online so that other people see his plan and go through with it, so I will not be doing that. But yes, they are absolutely sitting around plotting violent crimes and discussing ways to not get caught.

Whether or not they consider themselves a movement, they are terrorists and should be considered as such. The very definition of terrorism is committing acts of violence to achieve ideological ends. I've been keeping tabs on these incels for years -- long enough to know that yes, they are absolutely a danger to society. With these violent acts and their support of them, they are threatening to hold society at gunpoint until women are somehow forced to love them.

I don't know what can be done. I don't know if there's anything that can be done, legally -- although I am pretty sure that if there were online groups worshiping Osama bin Laden the way these fuckfaces worship Elliot Rodger, that the DHS would sure as hell be keeping tabs on them.

Wonkette is woman-owned, ad-free, and supported ONLY by YOU.