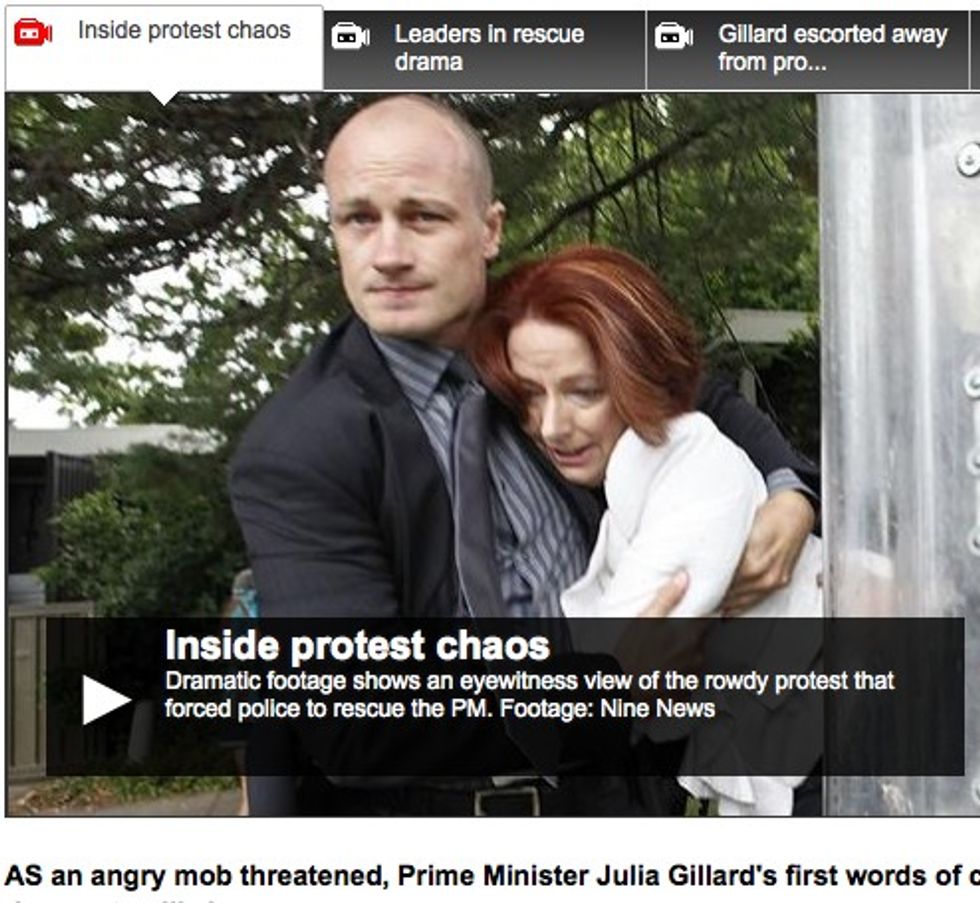 In a bold strike of the kind we hope to see in a lot of nations this year, a protesting group of indigenous people mobbed Australian prime minster Julia Gillard and opposition leader Tony Abbott from a fancy 1% restaurant in the capital of Canberra -- Gillard and Abbott were about to be torn apart, but their security teams managed to drag the politicians to safety. Why all the excitement? Because right-winger Tony Abbott suggested tearing down the aboriginal "tent embassy" erected 40 years ago in protest of two centuries of brutal oppression by the colonizing Europeans. Things are very weird in Australia! It's sort of like if America went straight from the Old West/Plantation Era directly to the Earth Day hippie Beatles world circa 1970, with nothing in the middle.

Here's what the newspapers and websites are looking like today, in Australia:

The tent embassy is not a "legal structure," and is actually (according to Wikipedia), "a controversial semi-permanent assemblage claiming to represent the political rights of Australian Aborigines. It is made of a group of activists, signs and tents that reside on the lawn of Old Parliament House in Canberra, the Australian capital."

It's as if the Native American seizure of Alcatraz Island back in 1969 had lasted not for 18 months, but for four decades. A great inspiration to Occupation Movements worldwide, of course -- and that's exactly why Tony Abbott is suggesting it's time to "move on" from letting long-oppressed native people keep their story right in the face of Australia's politicians, year after year. It has held the same spot on Old Parliament Hill for twenty years now.

It is an effective story, too, because even the most venal Murdoch supplicant in Australian politics is remarkably "politically correct" about the indigenous people of Australia. Real justice would involve the aboriginal people taking control of Canberra entirely, but a more likely result will be that Gillard's government moves quickly to establish a permanent "tent embassy" on the hill, an idea that has been knocked around for seven years now with no progress.

An indigenous elder apparently picked up Julia Gillard's right shoe, lost in the tussle, and it will be auctioned off for a Good Cause.