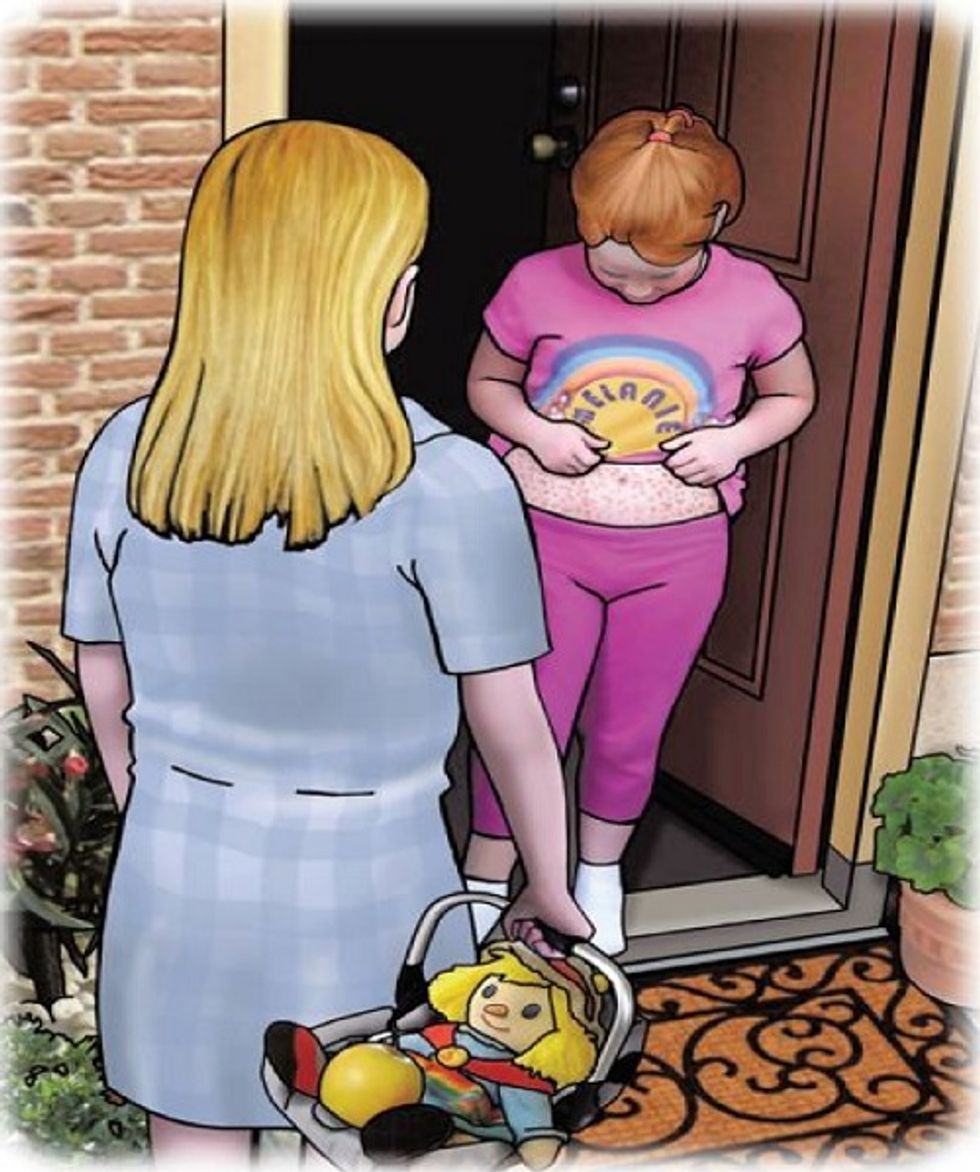 So here is a thing that exists: An anti-vaxxer children's book called Melanie's Marvelous Measles, published in 2012 and getting renewed attention now for pretty obvious reasons. It's a happy little book about the joys of getting measles and staying healthy by never getting vaccinated! We felt a bit guilty about even spending three bucks for the Kindle version, but we knew that you, the Wonkette reader, deserved to get more than a third-hand look at this madness -- you deserve a second-hand look through Dok Zoom's suffering eyes. So we resolved to double our contribution to Doctors Without Borders as penance, and clicked "buy now."

Oh lord this thing is terrible.

It's the story of Tina, a crunchy-granola little girl who's never been vaccinated, who learns that her best pal Melanie is out of school with the measles. Tina's little brother "was very sick after he had his shots," so her mom and dad "played it safe and Tina didn’t have any shots at all and she has been a very healthy child." She's worried though, because the class bully, Jared, says that "you're going to die if you don't get vaccinated!" But reassuringly, another unvaccinated kid in the class -- it seems to be full of 'em! -- retorts,

“Well, I know that isn’t true because I haven’t had any vaccinations and I am still alive!”

Jared didn’t know what to say to that!

Tina runs home after school and her mother gives her an apple and a glass of water, for health, and reassures Tina when she worries that the measles will catch her (aww, kids think funny things!):

“For most children it is a good thing to get measles,” Tina’s mother reassured her.

“Many wise people believe measles make the body stronger and more mature for the future,” she concluded.

Mommy explains that people merely fear things they don't understand, and in the good old days, when a kid had chicken pox, all the parents would send their children to play at that kid's house: “They hoped their children would get the disease and then have natural, lifelong immunity,” Mommy says proudly. Naturally (HA! HA!) this gives Tina a great idea:

“Can we go and visit Melanie so I can catch her measles?” Tina asked.

“That sounds like a great idea,” laughed Tina’s mother. “Let’s take her some carrot juice and melon to help her get strong and recover from the measles.”

And so it's off to Melanie's house for an infect-a-thon! Melanie is really proud of the spots all over her tummy, and says they don't itch at all! And it turns out that Melanie had even been vaccinated, but it didn't do a bit of good, because the doctor said Melanie's was "the worst case of measles he’s seen in years” (although the book also asserts that apart from the spots and feeling "very hot for a day or two," children are  completely unharmed by the disease).

“So much for being vaccinated!" Melanie's mom exclaims. There's some argle-bargle about how the Vitamin A in melon and carrot juice is actually what keeps you from getting measles, also too.

Tina can't wait to go back to school with (she hopes) her brand new measles infection, so she can share. Also, did we mention that her teacher is very very pregnant? But don't worry, this is just good measles, not rubella, so everything's fine.

As it turns out, Tina doesn't get measles, which in the real world has a 90 percent transmission rate. But in the book, Tina remains healthy, "because her immune system was in good condition because she eats lots of fresh, raw food, and also because she plays in the sunshine daily and drinks plenty of water." Jared, the vaccinated bully, gets measles, which is no surprise because vaccines are a fraud, and because Jared just eats so much junk food. Tina reflects on his predicament:

“I hope the measles make his body stronger and more mature and that he learns to eat more fresh foods so he can take better care of his body,” Tina thought to herself.

And who knows, she exclaims to her mom, “Maybe I’ll be lucky enough to catch measles next time someone we know has them!”

Oh, the book also warns that it's "not intended as a substitute for professional health advice," so be sure and see a "qualified health provider" -- you know, someone who you can pay to tell you to let your kid get measles for their own good.

This book actually has a disclaimer on Amazon's sales page warning that the book's description is written by the publisher and "may not be substantiated." Way to immunize yourself from lawsuits, Amazon!

And a note on the author: Stephanie Messenger is an Australian anti-vaxxer who claims that vaccines killed her one-year-old son 30 years ago (doctors reportedly attributed the boy's death to a rare genetic disorder, Alexander Disease; it is not caused by vaccines). The book has been widely condemned for suggesting that disease is fun and wonderful; Australian Medical Association president Steve Hambleton said the publishers "should be ashamed of themselves."

And frankly, we feel bad about sending any money their way, too, even with our guilt-donation to real doctors. But if mocking this thing into oblivion helps, maybe it was worth it.

Enjoy your carrot juice and melon! Now, if we could just rid ourselves of the itchy feeling this book gave us...