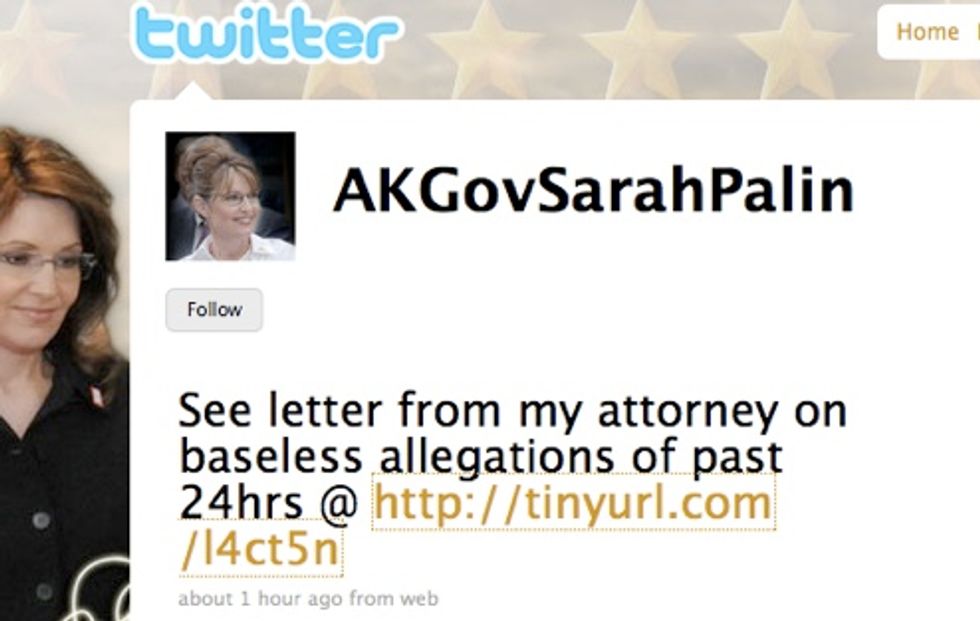 How did you spend the Fourth of July? Maybe having a BBQ with friends and family, watching a fireworks show, and generally enjoying a happy patriotic holiday? Batshit-insane American Quitter Sarah Palin ended her own special "Independence Day" by posting a series of desperate grammar-challenged nonsense and vicious threats on her Facebook and Twitter pages. Really.

(Also: Sarah, you idiot, when do you plan to give up your Twitter name AKGovSarahPalin? Because, you know, you just quit being governor ....)

It is unwise to dwell on the past or be obsessed with an unknown future, but we should all appreciate the wonderful present -- a present in which Sarah Palin is nothing more than a punchline. Because, had things gone very differently in November, this dangerous delusional numbskull would've been just an Ambien overdose away from the presidency.

Thank you, America, for steering clear of the Sarah Palin disaster.

So, after crazily quitting her elected position as governor of Alaska, via an alarming backyard last-minute press conference void of any explanation , at the classic 4 p.m. hour of the Friday-Holiday news dump, Sarah Palin is now twatting on the twitter about how her Anchorage attorneys are going to SUE THE AMERICAN MEDIA, for saying "WTF?"

Honestly, this is what Sarah Palin twatted on Saturday Night, July 4th, Independence Day, in America.

Her link goes to (of course) Scientologist nut and sub-literate weirdo Greta Van Susteren's blog on FoxNews.com, where Greta has helpfully (?) posted seven pages of legal threats from Palin's lawyers, although you can't actually read beyond the first vague page of whining bullshit, because Greta/Fox can't figure out how to operate the Internet.

But, from other websites, we gather Palin's lawyers plan lawsuits against MSNBC, the New York Times, the Huffington Post, the Washington Post, individual bloggers in Alaska, and other such anti-Palin forces such as "rain on your wedding day" and static cling.

Sarah Palin, a snowbilly grifter who spent her entire adult life desperately trying to become a Public Figure, apparently wants her attorneys to stupidly and pointlessly threaten American practitioners of free speech regarding our public figures and elected officials.