'Instapundit' Tells Whats-Her-Name, That Lady Who Got Shot In The Face, To Stop 'Bullying' People 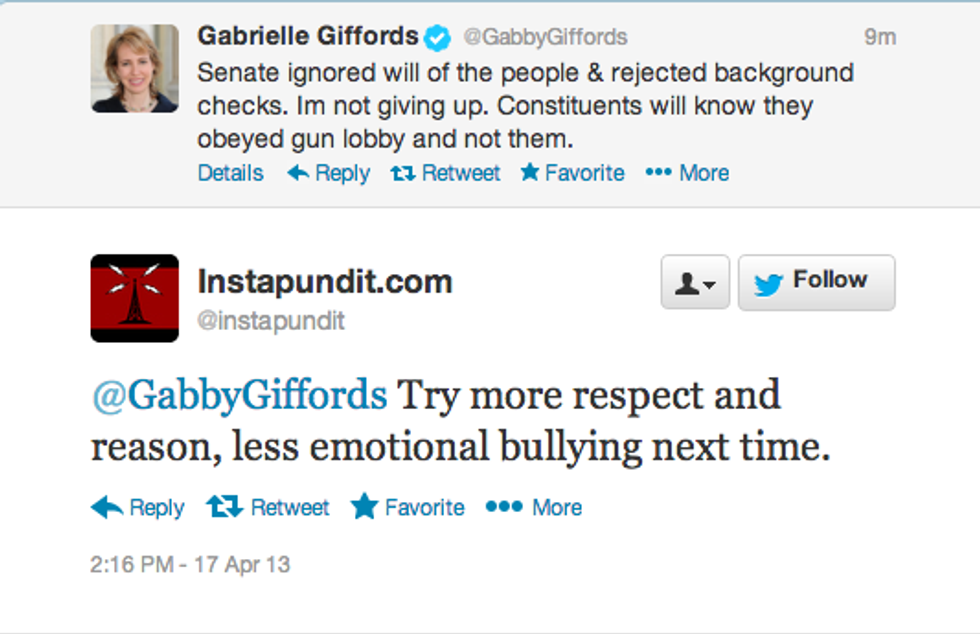 Of the many, many, many fine citizens who have sorely tested our hippie nonviolent ways this week, we may have finally found a winner. See that tweet up there? Yeah, it is right there, and it is fairly self-explanatory, but here is a TINY bit more background:

Gabby Giffords, the former congresswoman who posted the tweet evincing sadness that the Senate's Syphilitic Dick Caucus had successfully filibustered a modest, watered-down gun-background-check bill, was once SHOT IN THE FUCKING HEAD.

Then she and her husband, Astronaut Mark Kelly, started lobbying for some mild, common sense regulations regarding WHAT KIND OF FUCKING LUNATICS ARE ALLOWED TO HAVE GUNS.

They showed up places. She gave testimony, which she haltingly read. People cried, because of how we are liberal pussies. And when other, bad, people tried to make some sort of vague, ridiculous GOTCHA points about how Gabby Giffords in fact had not hand-written her own testimony, BECAUSE OF HOW SHE CAN'T WRITE NOW BECAUSE SHE GOT SHOT IN THE HEAD, other people told them to shut their fucking poo-mouths, which might have, conceivably, made them feel "bad."

And that is bullying. Where are the bills to keep Gabby Giffords from bullying innocent senators? Maybe the American Family Association can weigh in on this. After all, gay kids can just go kill themselves already, but Arizona Sen. Jeff Flake is a precious princess.