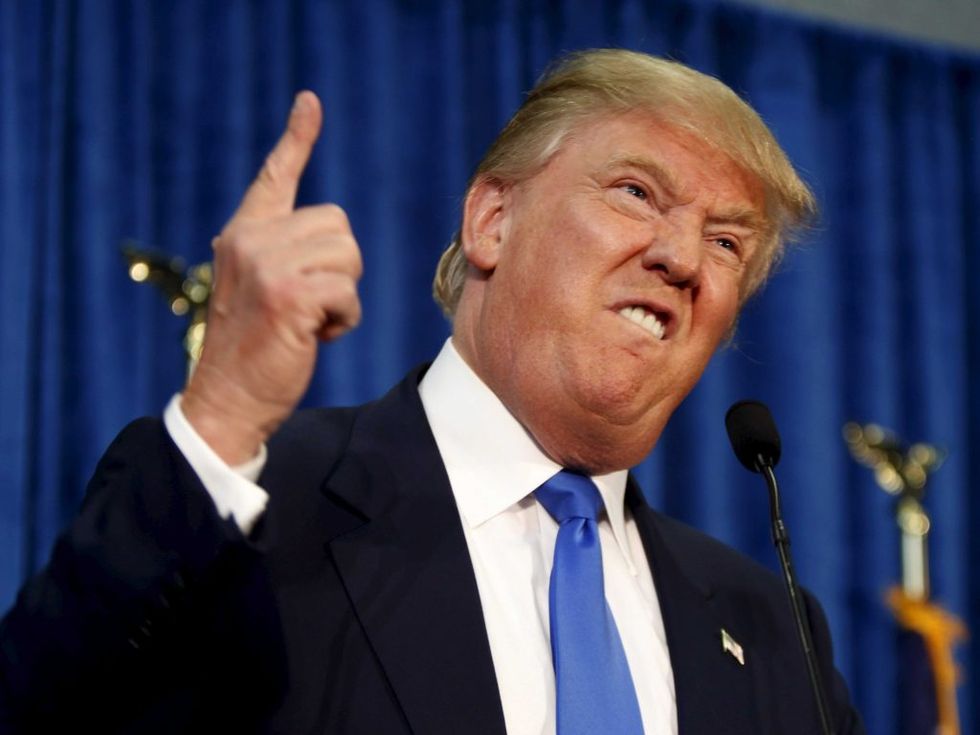 Nope, hell is the other direction.

Y'all saw that Donald Trump very smartly and bigly went after the intelligence community again, right? Because the REAL problem is not his former National Security Advisor Michael Flynn's collusion with Russia, but with how the IC caught Flynn in the act with his mouth on the Russian ambassador's ass, and worse than that, THE FAKE MEDIA FOUND OUT:

Man, the IC loves it when he does that. They're already reportedly withholding intelligence from President Pussgrab, because they don't trust him, not that Trump would notice, since his attention span and his literacy skills seem to fall short of what's required to grasp a Presidential Daily Briefing.

And Trump and his minions have attacked the IC over and over and over again, and oh god he wants to discredit them so much, since they have what's known as "intelligence" on what looks like his deep collusion with Russia in order to steal the election/enrich himself/find some Russian pee hookers to grab by the pussy/some combination of all of the above.

Well! Intelligence expert John Schindler, who wrote the original article about the IC withholding intelligence from Trump, had something to report on Twitter Wednesday morning:

WHOA HEY WHOA HEY, WHAT ARE THEY TALKING ABOUT? Well, Schindler has written before on why Trump is a huge idiot for declaring war on the IC, noting that though our various agencies fight each other all the time, "woe to the pol who gives them common cause by insulting them in public." Schindler is not the first one to say so either -- here's a former CIA agent saying it's a bad idea for Trump to do this, and none other than Senate Minority Leader Chuck Schumer says it's "really dumb" to do so, considering they "have six ways from Sunday at getting back at you." In other words, they are holding ALL the salacious information, more than Trump could EVER imagine, and they are just daring a motherfucker to come at them.

Did we mention the IC doesn't trust Trump, largely because of his questionable collusion with a nuclear-powered enemy state called Russia?

So, will Trump die in jail? We dunno, we're just a mommyblogger who says dick jokes. He might die of natural causes, or get bit on his fanny by a particularly scary flight of stairs. But to see this little report about how pissed off the IC is right now, hoo boy!

[wonkbar]<a href="http://wonkette.com/612710/dear-media-mike-flynns-resignation-does-not-mean-trumps-russia-scandal-is-over"></a>[/wonkbar]Because please let's remember, it's not just Flynn. He is just the tip of the iceberg, as we explained earlier this week. There's the Steele dossier (from that old British spy, Christopher Steele), the question of how much Trump knew about Russia hacking the election for his benefit, what kompromat Russia has on Trump (could be WAY more than alleged pee hookers, y'all), questions about ties other people in Trump's inner circle, past and present, have with Russia, and probably so much more we couldn't even imagine. The IC knows a lot of this already, and they don't seem to be getting bored with their investigatin' work!

Foreign Policy, which is kind of like Wonkette, has a fascinating piece this week about how Donald Trump's Russia Scandal Is Just Getting Started (that's the headline!), and we'd encourage you to read it in full. It describes something juicy, about how former Trump adviser Carter Page allegedly held a meeting last summer with a Kremlin dude and the head of Rosneft, the giant Russian oil company that's majority owned by the Russian government, and they offered to sell a certain stake in the company to "foreign investors" in exchange for lifting U.S. sanctions (hi, Michael Flynn, that's what you were talking to the Russian ambassador about!), and, oh fuck it, we'll let Foreign Policy take over:

The [Steele] dossier claims that a representative from Trump’s presidential campaign, Carter Page, met last July with Igor Sechin, head of the Russian oil monopoly Rosneft and a senior Kremlin official. Sechin reportedly offered a 19 percent stake in Rosneft in exchange for lifting sanctions, and Page was “non-committal in response.” [...]

Page was also in Moscow five months later on Dec. 7, one month after Trump’s electoral victory, when Putin and Sechin announced on Russia’s national television that the country had sold to foreign investors 19.5 percent of Rosneft, almost exactly the portion cited by the dossier.

Who are the "foreign investors"? Are their names T-R-U-M-P? Dunno! As Foreign Policy reports, it all traces back to a company registered in Singapore, and the owners of the stake are a bunch of shell companies that effectively conceal the identities of the actual owners. Oh, and the guy who Christopher Steele got that information from, about the Carter Page meeting with Rosneft? Dead now.

So! Does the IC in the United States know the answers to all this? DUNNO, AGAIN WE ARE A PROFESSIONAL DICK-JOKER AND NOT A SPY. We know it is easy to get the two careers confused!

But we'd bet our ass our finest spies are looking into it.