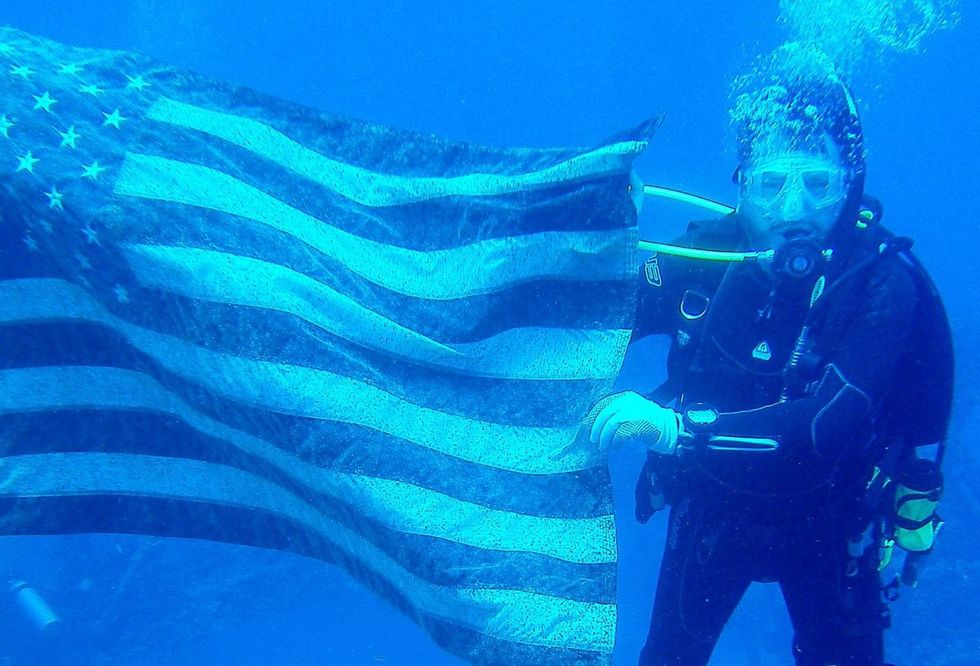 Meet Kevin Sabo! Kevin is the Acting Chief of the Office of Congressional and Legislative Affairs at the Bureau of Reclamation in the Department of the Interior. Since 2017, when he was promoted to this position from one in budget analysis, it has been his job to act as the liaison to Congress and work with them on matters regarding public land and water policy. He is a lawyer and a SCUBA diving instructor.

According to Talking Points Memo, Kevin also thinks that "the left" is turning the Parkland survivors into Nazis, somehow?

Seems unlikely! Also that's not what a Nazi salute looks like, at all, for any reason.

Oh! And, if one is to go by a Facebook post he shared on Feb. 25, he thinks that the Parkland shooting was some kind of false flag involving Debbie Wasserman Schultz...

- Within days of the shooting, high school students were able to organize a DC demonstration just a month in the future.

- One student, Alexa Miednik said she was exiting the school talking with the “suspect” (she made air quotes) Nicolas Cruz. At that time, she said that shooting was still going on. (Perhaps police were shooting as unbeknownst to them Cruz had mingled with other students to escape? Did any students die by friendly fire? Was Cruz a lone gunman or not a gunman at all?)

- Cruz talked about hearing voices in his head.

- Hearing voices is one of the traits of the Project MKUltra mind control techniques developed by the CIA in the 1950’s. If Cruz was programmed to act out in this violent manner; it would explain why authorities allowed him to “slip through the cracks”. It could either be dozens of times in which they were incompetent not responding to tips and warnings, or they were simply allowing the plan to unfold.

And, naturally, a One World Government hell bent on doing pedophilia to the world, or something.

- If you think the government—manipulated by very evil and powerful ruling elites seeking One World Government—could not be behind a mass murder of children; keep in mind two other data points. The “Fast and Furious” gun-walking scandal was an attempt by our government (Obama/Holder) to get US made and sold semi-automatic weapons into the hands of the Mexican drug cartel where they would be used in murders with the goal of getting political capital to pass more gun laws. The deaths would have been acceptable collateral damage. Second, the pedophilia in which the power and control hungry ruling elites regularly engage shows they will use children to further their own demented agenda. Dirt low sense of selfers care little for others blinded as they are by self-absorption. If this was a planned event, it was set for a location very aligned with following through on the plans of the ruling elites.

Yes, all of that seems very plausible, and definitely like the kind of thing a normal government official should be into. The only thing that's missing is the lizard people. What about the lizard people, Kevin?

Kevin has a history of believing in strange conspiracy theories. On Inauguration Day, he wrote a post on Facebook reading, "The kids are being paid by the Democrats to riot. In this administration, it’s the only work they can get."

In addition to being a weirdo conspiracy theorist, Kevin is also an attempted murderer. In 2000, he was sent to prison for 18 months after cutting the brakes on car of a woman he had been having an affair with, causing her to crash. Why? Because she broke up with him the day before, and he was mad!

Kevin, of course, said he was innocent, even though he confessed in a taped phone call that he had "done something" to her car. He claimed that he only said that "because she was pressuring him for an explanation and he feared that she would otherwise tell his wife about their affair and damage his relationship with his young daughter." He was convicted of "attempted malicious wounding," which seems light!

Kevin, who -- again -- once cut the brakes on his ex-girlfriend's car, notes on his LinkedIn page that he often talks to church groups about domestic violence. Against men.

Frequent public speaker on "The Embarassing Secret: Female on Male Domestic Violence." His remarks, usually to men's and church groups, center on his own experience of feeling trapped in an abusive relationship.

This is not the only time Kevin Sabo found himself at odds with the law. He also got in trouble once for stealing things from Home Depot and attempting to return them for cash. Again, just a very normal thing to do. He was briefly disbarred for these things, and then reinstated after the District of Columbia Court of Appeals overruled the Bar association, on account of how he had proven to him that he was "a changed man."

Now, according to the Department of the Interior, the position Kevin has been filling -- which is traditionally given to a political appointee -- is still vacant. This is not at all surprising, given how slow they have been on sending me the free buffalo I sent away for in 6th grade after reading Abbie Hoffman's Steal This Book. However, once the Trump administration gets wind of his many qualifications, they are sure to scoop him up and make his position permanent as soon as possible.

Wonkette is ad-free and supported ONLY by YOU. We don't even steal Home Depot shizz for cash! Please click to help us live FOR EVER.