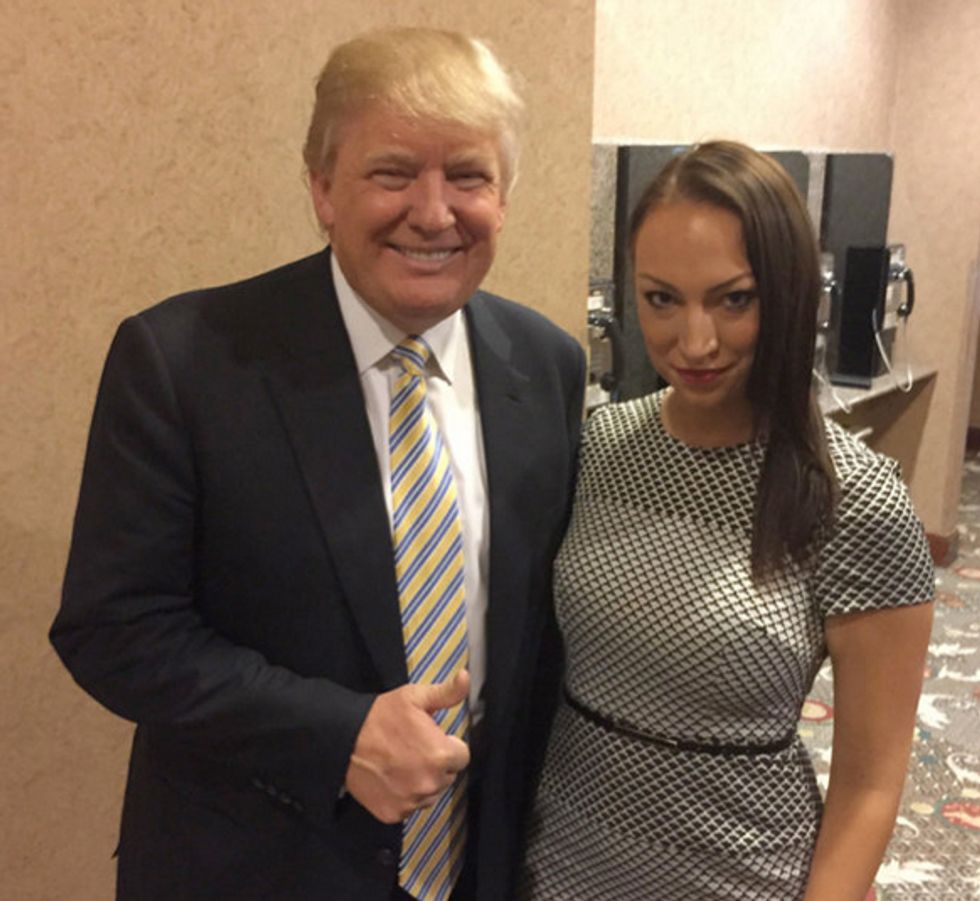 He had problems with her persona

In an enormously surprising turn of events, a woman fired by Donald Trump's Iowa campaign organization has filed a gender discrimination complaint against the Trump campaign, accusing it of paying men more than women for the same job. Frankly, we're astonished. We'd have assumed the Trumpoids were far more likely to be hit with a sexual harassment complaint, which just goes to show that Iowa politics is full of surprises.

The New York Times has the nitty:

Elizabeth Mae Davidson, 26, who was the Trump campaign’s field organizer here in Davenport, Iowa’s third-largest city, said in a discrimination complaint that men doing the same jobs were paid more and were allowed to plan and speak at rallies, while her requests to do so were ignored. She also said that when she and a young female volunteer met Mr. Trump at a rally last summer, he told them, “You guys could do a lot of damage,” referring to their looks.

Damned if that doesn't sound totally out of character -- the Donald Trump America knows and loathes would never say anything so mild. He'd be far more likely to turn to an aide and say, "Jesus, get a load of her! Her face could stop a clock! Somebody get these dogs outta here!" Maybe he hadn't had his coffee yet.

When the Times contacted Trump for comment, he "denied making the remark but did not address the other two allegations":

“That is not the worst thing that could be said,” Mr. Trump said. “But I never said it. It’s not in my vocabulary.”

He added that he did not know Ms. Davidson but that in checking with his staff, he was told she was a disgruntled employee. “My people tell me she did a terrible job.”

[contextly_sidebar id="TlVFi8MTouZ5p3sdbnFYRHmsw0UjPjzF"]OK, that sounds more like Trump. He could have said far meaner things about the stupid incompetent broad, but he's far too classy to have done anything like that, because he is a gentleman. And have you seen his polling numbers? He would never discriminate against women with numbers like he has. Absolutely incredible numbers, nobody else comes close. He cherishes women, he'll have you know, even the ugly ones like Heidi Klum, and gets all the pussy he could ever want.

We're also looking forward to the inevitable fact check proving that the words you, guys, could, do, a, lot, of, and damage are all actually part of his notoriously limited vocabulary, even that last tricky two-syllable one.

Mr. Trump was also quite displeased that the New York Times would dare to report on Ms. Davidson's complaint on the very day before the Iowa caucuses, saying “A story like this could damage my chances.” Oh, shit, there's a, could, and damage right there. We're perfectly willing to believe, however, that "misogyny" is not in his vocabulary.

Davidson was shitcanned by the Trump campaign January 14, one day after the Times had run a story depicting the campaign's senior Iowa leadership as having all the clarity of purpose and decisiveness of a roadkill squirrel, but a different one from the one on top of the candidate's head. The article described Trump's Iowa organization as "amateurish and halting, committing basic organizing errors," but portrayed Ms. Davidson positively, calling her "one of the campaign’s most effective organizers."

Apparently, being singled out as competent -- by that terrible rag the New York Times, no less -- didn't sit well with her Iowa bosses, who seem to have concluded that if Davidson looked good, it was her fault they looked bad:

Her complaint also noted that male staffers who spoke to the media faced no similar retaliation. Probably because they were team players who never got singled out as competent, Miss Smarty Pants.

[contextly_sidebar id="6slohMU9DJbjT4RNgMkhnghOjRxhSKKm"]In a serious letdown, the Times says the complaint contains no additional details about the incident in which Trump allegedly said that she and a female campaign volunteer "could do a lot of damage," which is disappointing, because it's difficult to imagine Trump not going into further detail about the flaws he perceived in either woman's looks.

Fortunately, he has a full caucus day of media appearances to defame Davidson further and complain that the Times is out to make him look like some kind of misogynist bully. The smart money says that he'll take to Fox & Friends to explain that while Davidson truly is hideously ugly and not the least bit bangable like his hot daughter, at least in terms of her persona, the real problem was her job performance, never mind her face, even though the very memory of it makes him want to vomit repeatedly. Then Steve Doocy will pantomime putting two fingers down his throat, make a gagging noise, and laugh and laugh.

[contextly_sidebar id="G3kdV630EroY7YUmUx5dS1r6IhFiArbY"]Or maybe Trump will simply shoot her and dare anyone to vote against him.