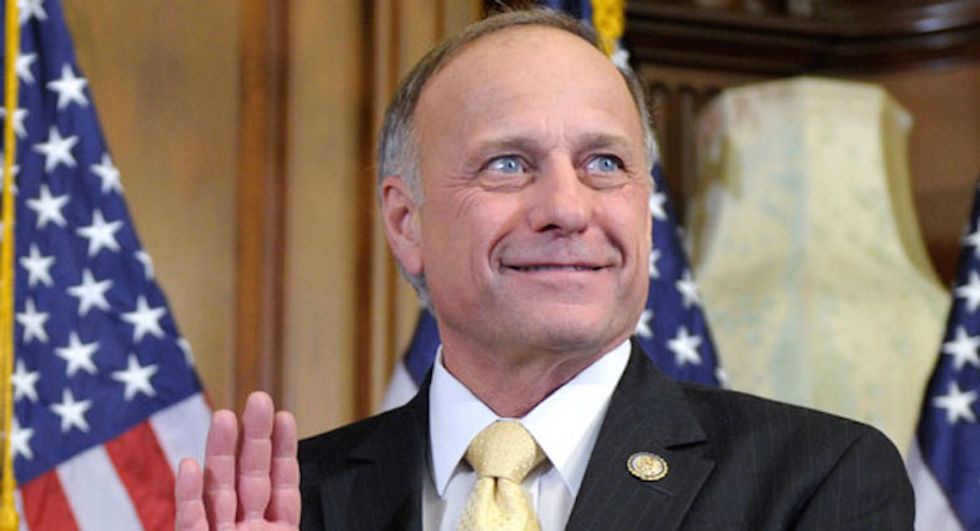 Rep. Steve King, the amiable dunderheaded fella from Iowa who was slurring Mexicans as drug dealers and rapists before it was cool -- and who once seemed, in his pure and noble quest to legalize dogfighting, to not realize that raping and kidnapping 13-year-old girls was in fact illegal, and if it weren't, he'd be well-positioned as a member of Congress to help make it so (what we are saying is Steve King is not so bright) -- ANYWAY, Steve King has decided it is time to go full-on White Power like a common Donald Trump Junior.

So Rep. Steve King is wishing this far-right person Frauke Petry in Germany a good vote so she can go on to represent all the people who actually want German Polizei to shoot people illegally crossing Germany's borders, as one does. (He's also been retweeting some nice fellas' description of Geert Wilders and Nigel Farage and Viktor Orban and Marine LePen as "strong leaders," which is also as one does, when one loves fascism. He's really only missing the "strong leaders" Golden Dawn and that Nordic asshole who murdered all the kids at summer camp and then bitched he didn't get the newest video games in prison. Yes, we are talking about Julian Assange!)

All fine and ordinary, for a fascist, and for Iowa's sweetheart, Rep. Steve King. But we repeat ourselves.

No, what is actually still shocking, FOR NOW, is that bit about "cultural suicide through demographic transformation." That is ACTUAL WHITE POWER words, just bigger than the ones used by your friendly neighborhood terrifying neck tattoo man currently selling you your meth. What it means, in the words Donald Trump Jr.'s biggest fans would understand, is ... you know, it's really hard to explain what it means without just throwing down the n-word?

Like, there is actually literally no way to explain what that means in little words without being horribly, for real, so offensive I want to give a trigger warning to myself! So fuck it, it's impossible, just use your imagination.

Iowa Rep. Steve King: Why Is It Wrong To Dog-Fight If It Is Okay To Rape And Kidnap These Children?

The point we are making here is that Rep. Steve King has already helped to normalize love for actual fascists in today's GOP. But the whole white power thing is new, so thanks Donald Trump!

What a neat time to be alive!