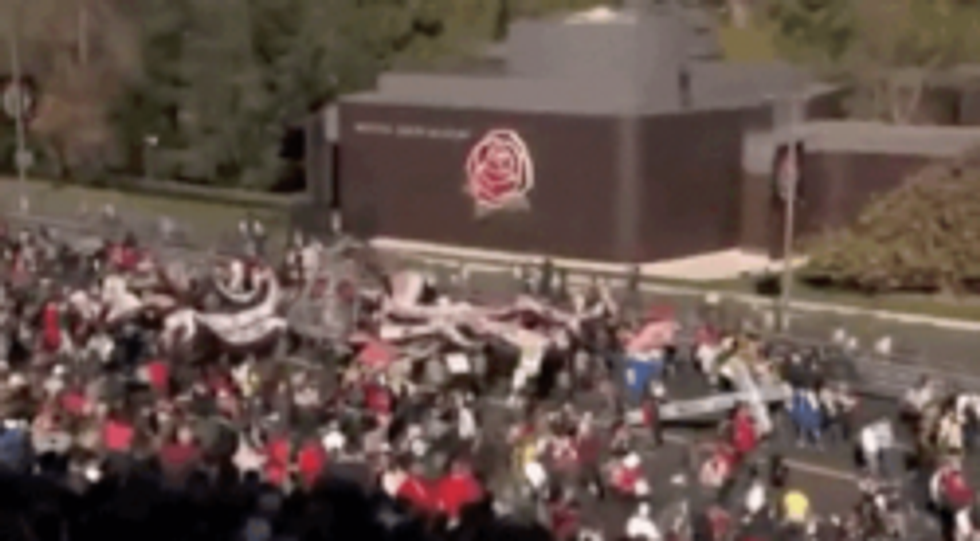 NEW YORK—Friends,we have arrived. Months and months of penetrating insight and attentive poll-watching from our dedicated, thoughtful crew of professional political reporters have all been leading up to this moment, when tonight, in living rooms and VFW halls across the frost covered fields of the great state of Iowa, a block of voters representing fewer than three one-hundredths of one percent of the total US population kick off this year's Republican nominating contest. It is here that so many months of breathless speculation will finally see a pay off when panelists, columnists, and editorial boards all simultaneously turn their attention to... breathlessly speculating about exit polls! Before it starts all over again for New Hampshire! And then South Carolina! And then in Florida and again on Super Tuesday until a president is finally elected on November 6th and we can all get back to the important business of breathlessly speculating about who will be running in 2016.

So here's what to look foward to this evening, sports fans: caucusing begins at 7:00PM local time (8:00 in beltway and Rock Center television studios), when Iowa Republicans will read off a few well-vetted prepared talking points (Rick Santorum's supporters will apparently be quoting Glenn Beck) before literally scribbling down the name of their preferred candidate on a piece of paper (you're so adorably rustic, Iowa). But good news for one-L two-N Michele Bachmann: the Iowa state GOP tells Talking Points Memo that misspellings will be counted. And it's important to remember that Iowa Republican nominating rules have no 15% viability threshold, meaning the chips will fall however they will after only one round of balloting (this is in contrast to the 'Survivor'-style Democratic nominating contests, where supporters of candidates who obtain less than 15% of the total vote throw their support behind another candidate who's still standing in later rounds—and with Gingrich, Perry and Bachmann enjoying the support of a total of 30% of caucusgoers with not one of them capturing over 15%, this is very good news for Mitt Romney).

Also, even unregistered Iowa voters should feel free to show up at their local caucus tonight, where they can register on the spot without any form of photo identification, since it turns out Republicans aren't so concerned about voter fraud when the only people voting are Midwestern white people.

But thankfully for all of us there's actually no need to tune in at all, because as usual Nate Silver has already predicted everything: the Bill James of American politics is putting the smart money on Mitt Romney, with only a slightly smaller chance that Ron Paul stages an upset. But we're not about to let the professional pundit class have all the fun here, so if you'll let us put on our prognosticator's cap for just a moment (it looks a lot like Princess Beatrice's), we're a bit more inclined to agree with Howard Dean here and suspect we may just end up with a Santorum upset.

Speaking of Santorum, the distinguished halls of the Grey Lady are swelling with Rickmentum today, where the ungoogleable one is not only getting special attention for his sweater vests but even seems to have sealed the David Brooks endorsement.

And if there's any good news to come out of tonight's theatrics it's that none of us will ever again have to pay attention to Rick Perry or Michele Bachmann, a payoff which really couldn't have come a moment too soon considering that at a Bachmann campaign stop yesterday, according to the Times, "One man brought his Bible to be autographed. And Mrs. Bachmann said she was delighted to do it." (And that's when our heads exploded.)

Meanwhile, former Politico star Ben Smith is already bringing the lulz in his new gig over at BuzzFeed, where he outlines "Ron Paul's secret plan to actually win." BuzzFeed readers rate this theory "Win" over "Fail" by a two-to-one margin, with "LOL" and "Cute" trailing not too far behind in a statistical dead heat.

Don't miss yesterday's look ahead from Greg Sargent at the GOP's game plan for the general: "After doing everything in their power to prevent Obama from successfully transcending partisanship and achieving transformative change — even if it meant repeatedly opposing solutions to profound national problems they once embraced — Republicans will now attack him for failing to transcend partisanship and achieve transformative change."

Lastly, we were slow-clapping at our laptop yesterday when we saw this truly herculean effort from Capital New York's Joe Pompeo, "An Annotated Field Guide to the Campaign 2012 Press Corps." All 1,500 of them!! (Which of course made us think of this tweet from David Sirota: "Shocking that same media spending this much cash on 24-7 coverage of IA caucus somehow pleads poverty when it comes to actual journalism.") (#truthbombs #shotsfired #etc #etc #etc)