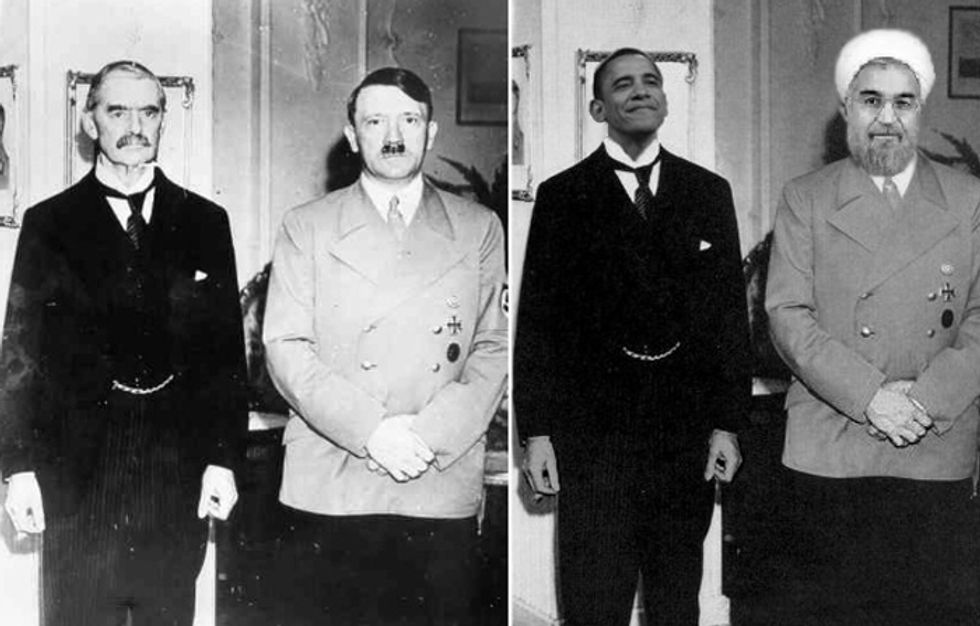 An agreement to limit Iran's nuclear development has been reached between Iran and the United States, plus five other nations that were so important to the negotiations that the New York Times named them all in the 33rd paragraph of its story on the deal. While President Barack Obama said the agreement is "not built on trust, it is built on verification," many representatives of Israel in the U.S. Congress have complained that the deal is terrible and will lead to Iranian domination of the Middle East, the destruction of Israel, and probably gun confiscation and abortions, because everything Obama does will lead to those. The agreement is the result of a framework that Iran and the U.S. agreed to in April.

Among other startling details to come out of the negotiations is that U.S. Secretary of State John Kerry has made a remarkably quick recovery from that ISIS assassination attempt that was disguised as a "bike accident" at the end of May. He got around on crutches, almost as if he actually had broken his leg, but did not appear to have been hiding any near-fatal machine gun or blast wounds.

The deal will restrict the amount of enriched nuclear materials that Iran can keep, requiring it to "reduce its current stockpile of low enriched uranium by 98 percent, most likely by shipping much of it to Russia," according to the Times. It would also reduce by 66 percent the number of centrifuges Iran is allowed to operate for enriching uranium. Iran also agreed to accept regular inspections by the International Atomic Energy Agency. As a result, said President Obama in remarks announcing the deal:

To put that in perspective, Iran currently has a stockpile that could produce up to 10 nuclear weapons. Because of this deal, that stockpile will be reduced to a fraction of what would be required for a single weapon. This stockpile limitation will last for 15 years.

In exchange, international sanctions on Iran would be lifted, and Barack Obama promises to place a chocolate on the pillow of the Iranian president every night. If inspectors determine that Iran has resumed enriching and stockpiling nuclear fuel, the sanctions would return, and Obama would leave only inferior dollar-store chocolates on the pillow.

Nonetheless, many critics of the deal have already declared it the worst diplomatic failure since British Prime Minister Neville Longbottom traded Czechoslovakia to Adolf Hitler for a pet frog and a handful of magic beans in 1938. Presidential candidate Mike Huckabee condemned the impending deal last Friday by releasing a re-edited version of Lyndon Johnson's infamous "Daisy" ad from 1964, strangely suggesting that Barack Obama is the greatest threat to world peace since Barry Goldwater. On Fox News, Huckabee explained:

Everyone understands that once you go to a nuclear device that now you’re talking about apocalyptic-type situations. If Iran gets nuclear capacity, we’re now looking at the apocalypse because these people are crazy enough to use it, first against Israel and eventually against us.

You know, just like the crazy Pakistanis and Indians have been lobbing nukes at each other for years. If only Israel and the United States had some form of nuclear arsenal that would make Iran think twice about attacking either country. Once the deal was announced, Huckabee simply read at random from a set of Iran Poetry Magnets, saying, "Shame on the Obama administration for agreeing to a deal that empowers an evil Iranian regime to carry out its threat to 'wipe Israel off the map' and bring 'death to America.'"

Sen. Lindsey Graham, with his characteristic calm and clear-headedness, explained that the deal was "akin to declaring war on Israel and the Sunni Arabs,” and predicted that Hillary Clinton can now never be president because if there's one thing that motivates people to get out and vote, it's arms control agreements. He also indicated that the Middle East has suddenly become a dangerous place for the first time ever, saying, "If I had property in the Middle East, I would think about selling it after this deal.” Excellent real estate advice there.

Rick Santorum was no less frothy in his reaction, calling the deal a "catastrophic capitulation" and fretting that Iran had been strengthened by the end of economic sanctions and would cheat on the deal, because Iran, duh.

Senator and constitutional expert Tom Cotton, who explained to the Iranian government that Barack Obama doesn't really have any power as president, predicted that Congress will never, ever, ever let the deal take effect:

This proposed deal is a terrible, dangerous mistake that's going to pave the path for Iran to get a nuclear weapon while also giving them tens of billions of dollars of sanctions relief, even lifting the arms embargo at a time when they're destabilizing the entire middle east," Sen. Tom Cotton (R-AL) said in an appearance on MSNBC's "Morning Joe." "The American people will repudiate this deal and I believe Congress will kill the deal."

Other Republicans are expected to weigh in as the day progresses, mostly predicting nuclear annihilation because that's really the only possible outcome of arms control agreements. As we went to press, Donald Trump, on top of the news as usual, was still tweeting about the need to build a really big wall on the southern border so Mexico can't send its rapists to us; we predict that by the afternoon, he'll finally explain that a huge border wall will also protect us from Iranian nukes. And then he'll explain we should go over there and take their oil.