Is Donald Trump Actually Terrified Of 'Stairs'? No, Really, 'Stairs'? A Wonk-vestigation! 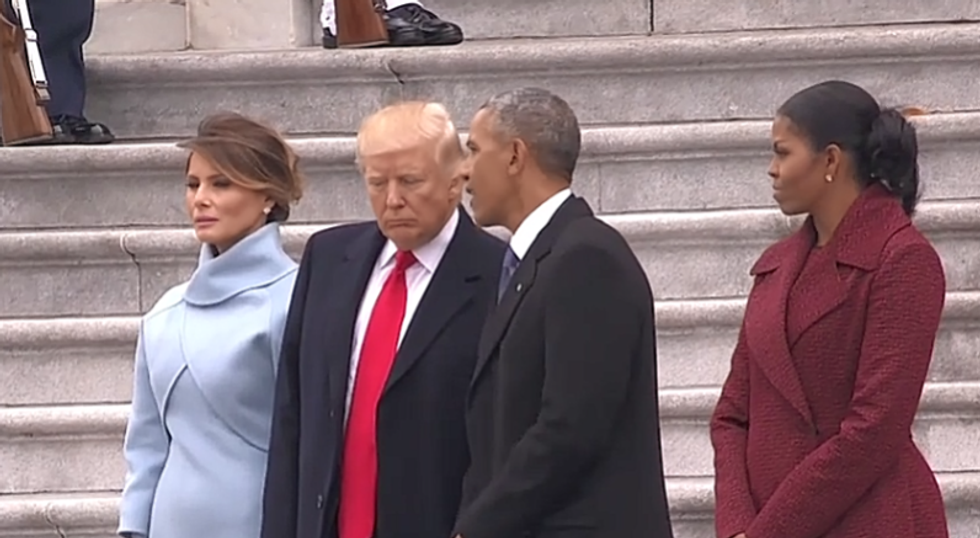 Do you remember the 2016 presidential campaign, when Hillary Clinton died every single day of an affliction she refused to share with the world, and was then daily resurrected to go on and win the popular vote by three million, on account of how she is The Devil? Ah, simpler times. But two curious items have struck us in the news lately, about how Donald Trump might be dying too. But in Trump's case, he may not be dying of dysentery or dia-beet-us or sniffles like a common Hillary, but rather DYING IN FEAR. Of staircases.

Consider first the Washington Post story where half the White House staff leaked a bunch of shit about how their boss, the president, is a whine-baby who has to be parented constantly, to the point they actually have to control his TV time, because he's likely to see something on Fox News or Maury or Judge Judy that sets him off, thus starting international crises and such. Totally normal president stuff. But in that piece was this curious tidbit about how Bleeding Nailbed Kellyanne Conway is being pushed aside in the White House, because her new office is up AN ENTIRE FLIGHT OF STAIRS from the Oval Office, and Trump doesn't Do Stairs.

One suggested that Conway’s office on the second floor of the West Wing, as opposed to one closer to the Oval Office, was a sign of her diminished standing.

Though Conway took over the workspace previously occupied by Valerie Jarrett, who had been Obama’s closest adviser, the confidant dismissively predicted that Trump would rarely climb a flight of stairs.

Now, at first glance, you might think, "Meh, lazy fucks gonna lazy fuck," and besides the stairs aren't gold plated, so they aren't even usable.

But then, the Times of London did a piece about Trump's meeting with UK Prime Minister Theresa May, where this tidbit emerged:

Downing Street officials claimed the president’s phobia of stairs and slopes led him to grab the prime minister’s hand as they walked down a ramp at the White House.

PHOBIA OF STAIRS? Trump had to hold a girl's hand because of his PHOBIA OF STAIRS? But we thought his only phobia was the germs in Russian Hooker Pee. And his phobia of the Normal-Size-Handed Monster Who Lives In The Closet. And his fear of the truth about how many people voted for him. And his servile fear of Vladimir Putin. And his deep dread when it comes to suits that fit him. We are getting off track!

So is Trump a-feared of the stairs? Does he tremble at the way they creak in the night? Did a staircase bite him on his weenus one time? Did he have a great fall on some stairs one time, and that is why his brain appears to be broken?

A couple of possibilities:

OK, that's some ideas why Trump is scared of staircases to get us started. As usual, don't share your own ideas in the comments section, because Wonkette Does Not Allow Comments.