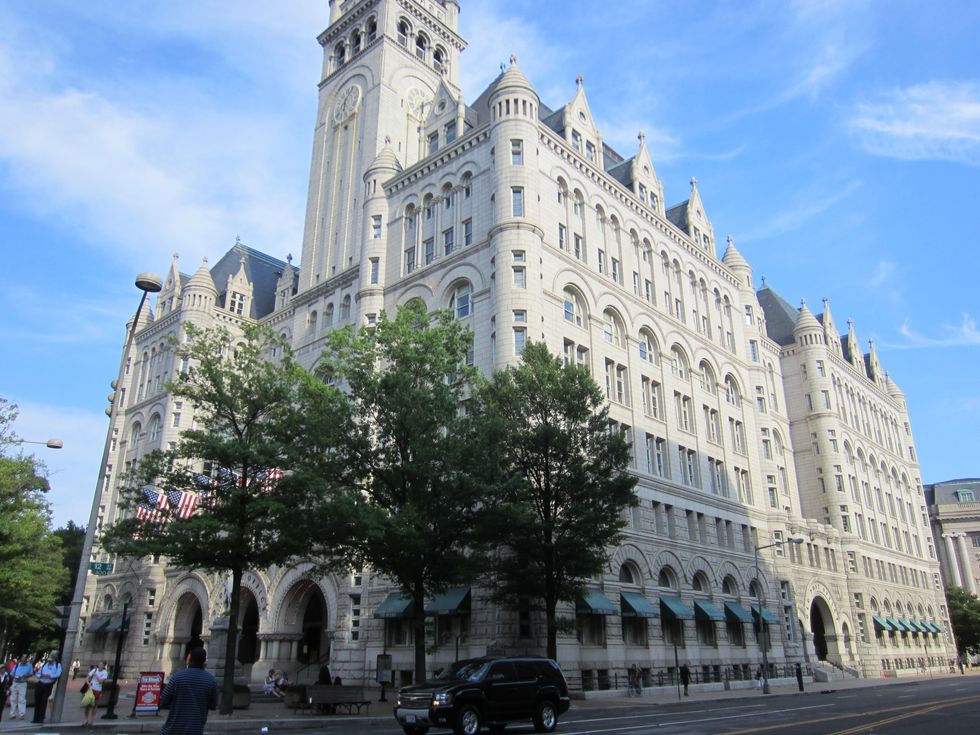 The latest building Trump has been allowed to trash up.

Huh, here is a story! It seems that the very day Orange Hitler McGee takes office as president of the United States, he will be in violation of his lease agreement on his trashy new hotel in the Old Post Office, because he is leasing it from the government, and unfortunately for Donald Trump, Zere are rules! that apply to this sort of thing. According to a letter released by Rep. Elijah Cummings and other congressional Democrats, about a briefing they had with the General Services Administration, Trump needs to sell the damn thing, unless he wants to be in big trouble, mister. Here is the letter, which we are embedding for you because we are #nice:

Also because we are #nice, we will save you having to scroll through that dumb boring thing, and tell you the important parts:

...[T]he Deputy Commissioner informed our staff that GSA assesses that Mr. Trump will be in breach of the lease agreement the moment he takes office on January 20, 2017, unless he fully divests himself of all financial interests in the lease for the Washington D.C. hotel. The Deputy Commissioner made clear that Mr. Trump must divest himself not only of managerial control, but of all ownership interest as well.

Specifically, section 37.19 of the lease agreement provides: "No member or delegate to Congress, or elected official of the Government of the United States ... shall be admitted to any share or part of this Lease, or to any benefit that may advise therefrom."

Trump Already Shaking Down Foreign Diplomats For Access, Via His Stupid Hotel. Winning!

Nothing to see here, just the president-elect shaking down foreign diplomats for access. FUN! :D

OK! Seems pretty clear cut. Trump is not allowed to have any financial interest at all, because he will be an elected official (specifically the preznit *vomit*). The letter later states that the deputy commissioner of the GSA "confirmed repeatedly" during the briefing to House Democrats that this is how the GSA interprets this, and that said deputy commissioner "rejected alternative interpretations of this provision provided by others." Still clear cut? We think!

According to the letter, the Trump team has known about this but has lifted nary a tiny pinky finger to try to get square with the GSA on the issue. Also too, it notes that the Trump person who was the point person on negotiating and signing this lease was the "Ivanka" one, who happens to be on the Trump transition team, ergo MOAR CONFLICTS OF INTEREST.

OK, good story bro, guess this post about yet another crazy fucked up issue with our coming Trump kleptocracy is over. Oh wait, what's that, Washington Post?

Federal officials overseeing Donald Trump’s lease for his D.C. hotel pushed back against congressional Democrats’ assertion Wednesday that the president-elect would violate a clause in the agreement if he did not surrender his interest upon entering office.

... [A] GSA spokeswoman responded with a statement saying the agency, which oversees federal real estate, “does not have a position that the lease provision requires the President-elect to divest of his financial interests.”

“We can make no definitive statement at this time about what would constitute a breach of the agreement, and to do so now would be premature,” the agency said.

We repeat, WHAT? But we thought the GSA told those nice Democrats ... WTF, GSA?

Is this a government bureaucracy matter where some parts of the GSA are thinking with their big head and others are thinking with their little head? Does one hand not know what the other is doing? Are Elijah Cummings and the other Democrats who sent this letter big fat liars from Liar Town? (Doubtful.) Is the Washington Post a ding-a-ling that meant to start its article by saying, "If this was Opposite Day, we would report this story by saying the following bullhockey"?

Is the GSA already rolling over and dying in the face of Trump's massive, insane conflicts of interest?

We do not know, we are just asking questions, but they are important questions and they need to be asked!

Trump obviously needs to divest himself entirely from all his business interests, otherwise he'll be in violation of all kinda laws, and also the Constitution. He's not going to do that, though, probably, so we'll need various agencies of the government to keep their backbones in working order to hold him accountable. So, just to be helpful, and in case the GSA is confused, Wonkette just read the lease terms quoted in Elijah Cummings's letter, and found that DUH, YOU SILLY GEESE, Trump will be in violation of his lease, it's not that damn complicated, so put a blue ribbon on Wonkette's bathing suit region and give us first prize for being S-M-R-T!