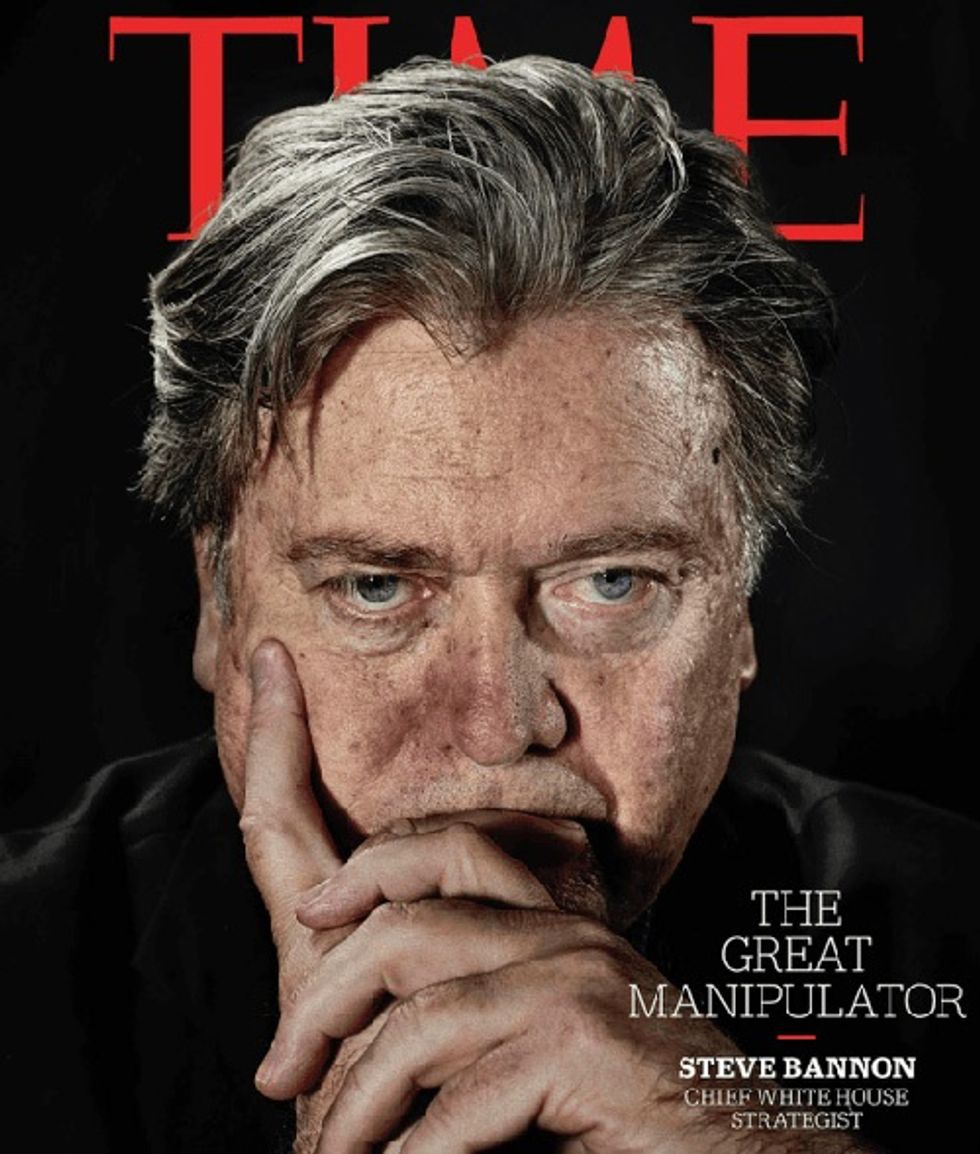 Is Steve Bannon about to FINALLY get visited by the men in the White House who show up to take away your badge and escort you off the property with your dick in your hand? MAYBE! Of course, Bannon seems to have a sneaky way of manipulating himself back into Donald Trump's good graces, so we'll believe it when we see it.

A number of stories have led us to this point, about how Bannon and his "alt-right" Nazi pals represent one faction of the White House, whereas Jared Kushner leads the opposing faction, the one that isn't full of Nazis. Earlier this year, Bannon called Kushner a "cuck" (you DO NOT call the president's son-in-law a "cuck") and Trump has reportedly been pissed that Bannon steals the limelight from him, by being on the cover of Time magazine and whatnot, and because everybody calls him "President Bannon."

But now there are a couple of other factors at play, and things are legitimately looking bad for Bannon. For one thing, General John Kelly, Trump's Marine chief of staff boyfriend, is reportedly fucking DONE with all the drama in the White House, and drama, thy name is Steve Bannon. Also, according to Axios (the website with the three-sentence investigative reports) Trump thinks Bannon is a big hairy pock-marked leaker.

Bannon didn't get to go on Trump's Bedminster staycation, where big General John has been holding meetings about turning the untrainable Trump White House into a seamless operation that actually accomplishes things. (Good luck.) According to Politico, Bannon's name just keeps coming up as a "problem." We imagine that's happening even more now, after a weekend of domestic Nazi terrorism in Charlottesville has put a spotlight on the Nazi white supremacist contingent in the White House.

The role of chief strategist Steve Bannon has come under particular scrutiny in several conversations, particularly because he has a large staff, including an outside public relations expert, but no specific duties. [...]

He has heard a number of complaints about Bannon, who has remained in Washington during the president’s stay in Bedminster, and was displeased by a TV performance from Sebastian Gorka, a national security aide, who questioned Secretary of State Rex Tillerson’s comments about the use of military force against North Korea.

Now, will Kelly get his way? Will he convince Trump that yes, for real, this Bannon dude, who whispers in your ear and controls you like a puppet, is a big problem? Mayyyyybe.

On the one hand, The Daily Beast reports that Bannon has been telling all his White House buddies that he'll be sticking around because Trump is "one of us," by which he means that at heart, Donald Trump is a white nationalist neo-Nazi fuckstain from hell. Maybe that is why Trump just can't bring himself to say Nazis in Charlottesville are bad!

On the other hand, Trump is mad AGAIN that Bannon is stealing all his thunder -- did you hear about that new sexxxy book by Joshua Green that's ALL ABOUT HIM? -- and he's pretty sure Bannon is the one leaking stories about National Security Adviser H.R. McMaster, whose head Trump's deplorable "alt-right" Breitbart supporters want on a platter for the crime of being too sane.

So is Bannon really actually on his way out? Unclear. Politico is hedging:

Though several presidential aides said they expect the new chief of staff to push Bannon out in the coming weeks, Bannon has survived many ups and downs in the Trump White House and has consciously lowered his profile over the past two months to avoid angering the president.

Meanwhile, Anthony Scaramucci, fresh off some much needed downtime after his 56-minute career as the White House Communications Director, made the rounds this weekend to talk shit about Bannon on the TV, and even went as far as to blame Bannon (he called it the "Bannon-bart influence" on the White House) for the administration's shitty response to Charlottesville's weekend of Nazi terrorism. To his credit, Scaramucci called the incident what it was, and said Bannon's comfy relationship with white supremacy/nationalism is "inexcusable."

H.R. McMaster also called the Charlottesville events terrorism in an appearance on "Meet The Press," during which Chuck Todd THREE TIMES asked him if he could still work with Bannon, and THREE TIMES McMaster ducked the question like a common question-ducker. We'll take that as a NUH UH.

The question here is whether Kelly ultimately gets his way with Trump, or if Bannon gets lumped in with Trump's Twitter account inside Trump's basket of non-negotiables, things Kelly isn't allowed to touch.

Place your financial bets, Wonkers! You can do so by clicking the donate button below, hahaha just kidding, that is just a place for you to give us money for Wonkette-ing at you day in and day out, because that's where ALL OUR OPERATING EXPENSES come from. So yeah, please do that.