Is Donald Trump Reverse-Gaslighting HIMSELF? 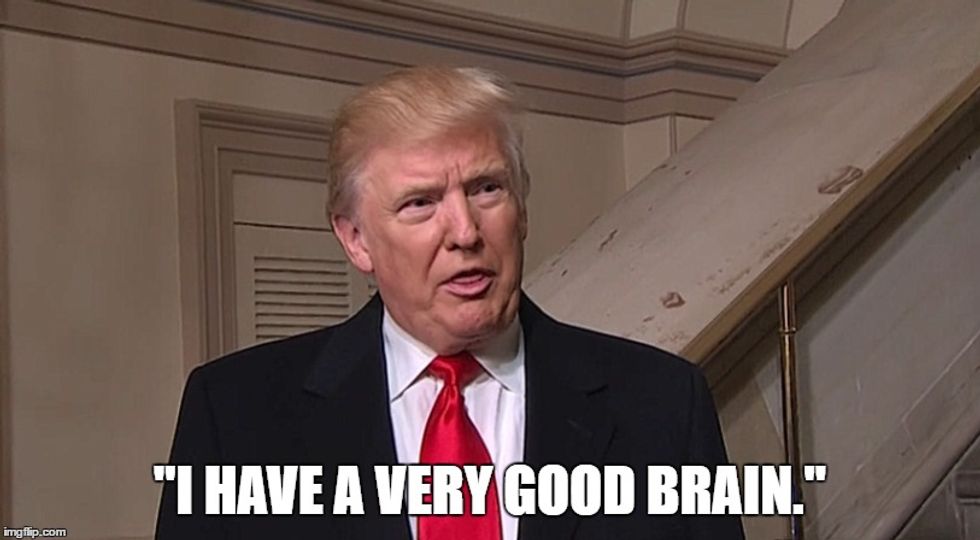 Wednesday afternoon, about an hour after House Intelligence Committee chair Devin Nunes wobbled his gross body out to announce he had been given intel on some sort of vague "incidental collection" of Trump team names in legal intelligence gathering about Not Russia, and therefore Trump was right about the "wire tapps," Donald Trump sat with Michael Scherer of Time magazine for a little coffee chat about his constant lying. It was for Time's upcoming issue, the cover of which asks, "Is Truth Dead?"

The interview is a mindfuck, to say the least. It's Trump insisting over and over again that no matter what he says, he's always proven right, according to the demons in his brain or the tribe of sycophants he surrounds himself with, otherwise it's somebody else's fault. And it leads us to ask a couple other questions besides the one on the cover, the first one being, does Donald Trump even know he's lying? Or, put another way, as he gaslights everybody else, is Donald Trump REVERSE gaslighting himself, convinced that only he is the sane one with all the answers, and the rest of us are cuckoo like the birdie? (IS THAT EVEN A THING?)

Remember that great article in Teen Vogue, written by Lauren Duca, about how Trump has been gaslighting America? Duca defines gaslighting as "psychologically manipulat[ing] a person to the point where they question their own sanity," and its an apt description of Trump's constant exclamations of FAKE NEWS! and his loser posse's invocations of "alternative facts," and so on. They are not the crazy person, YOU ARE THE CRAZY PERSON.

But is it possible that Trump, or the raccoons what live inside his brain, is not even conscious of how he's gaslighting us, because he really thinks he's telling the truth?

Here are a few instructive quotes from the Time interview, where Trump either insists he's been proven right on each and every bullshit thing he's said (even when a cursory look at Google tells us he's bigly wrong) or he blames somebody else for his errors.

Well I think I will be proved right about that too.

On Muslims celebrating in the streets of New Jersey about 9/11:

Well if you look at the reporter, he wrote the story in the Washington Post.

We’ll see after the committee. I have people say it was more than that. We will see after we have. But there will be, we are forming a committee. And we are going to do a study on it, a very serious problem.

[reading from Politico story about Nunes presser] ...[M]embers of Donald Trump transition team, possibly, oh this just came out. This is a Politico story. Members of the Donald Trump Transition team possibly including Trump himself were under surveillance during the Obama administration following November’s election. House intelligence chairman Devin Nunes told reporters, wow. Nunes said, so that means I’m right, Nunes said the surveillance appears to have been ... incidental collection, that does not appear to have been related to concerns over Russia.

I like Ted Cruz, he’s a friend of mine. But [the thing about Cruz's daddy being with Oswald] was in the newspaper. I wasn’t, I didn’t say that. I was referring to a newspaper. A Ted Cruz article referred to a newspaper story with, had a picture of Ted Cruz, his father, and Lee Harvey Oswald, having breakfast. [IT WAS IN THE FUCKING NATIONAL ENQUIRER! -- ed.]

On getting "wire tapps" done inside his bottom, by Barack Obama:

If those quotes broke your healthy brain, DO NOT try to read the whole interview.

But in all these instances, Trump sees only two possibilities, and "I'm a fucking jackhole who lies about things I know nothing about" isn't one of them. He will either be vindicated in the end, or he's just repeating what somebody else said, and he's definitely not responsible for what he may or may not have done in response to bad information.

We're not inside the president's head, so we don't know what kind of wasteland we'd see if we looked in there with a telescope. Maybe it's borderline personality disorder combined with an intense case of narcissistic disorder. Maybe it's just the Dunning Kruger effect. Or maybe he is REVERSE-COWGIRLING himself, in the gaslighting way, which is too a thing.

Whatever it is, HE CRAY-CRAY (allegedly!) and he shouldn't be president anymore (not allegedly!), so, you know, Mike Pence, whenever you're ready ...

Wonkette is reader-funded, by YOU. So if you can, throw us a few bucks, by clicking the happy banner below!