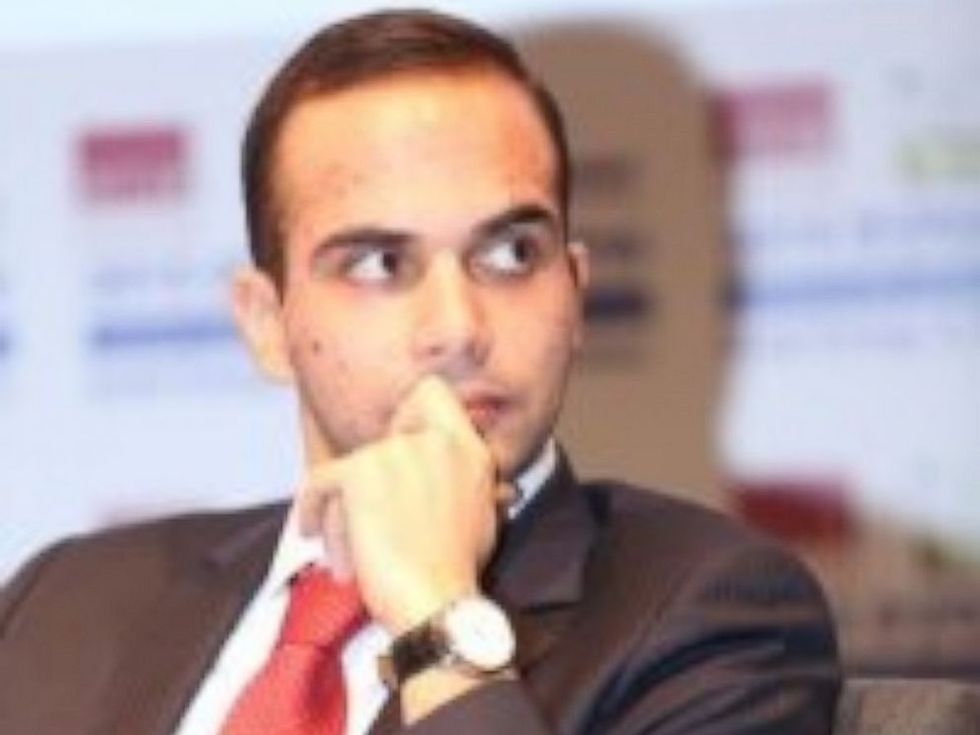 Ever since special counsel Robert Mueller sweetened the pot Monday by unsealing a surprise confession and guilty plea from Trump campaign adviser George Papadopoulos, a lot of new questions have arisen! Wonk pal Charlie Pierce is wondering whether Papadopoulos will go down in history as the first major crack in the Trump-Russia scandal, the one that inevitably leads to bringing all these fuckers down. It's a valid question, since the kid's statement of offense implicates a lot of Trump people, who are unnamed in the document, but whose names are coming out nonetheless.

Papadopoulos's name first hit the news in an August Washington Post scoop about how he was constantly emailing everybody on the Trump campaign begging them to go to Russia and have sexxx with Vladimir Putin. It's very likely Paul Manafort leaked the campaign emails to WaPo, because it made Manafort and others, like campaign co-chair Sam Clovis (the weird guy who is #NotAScientist but is Donald Trump's nominee to be the head science guy at the USDA), look very good, and it made Papadopoulos look like a bad kid trying to peer pressure the campaign into colluding with Russia.

... [t]he new emails reveal that Manafort had rejected a request from Papadopoulos ... to set up a meeting between Trump and Russian officials. [...]

Papadopoulos forwarded [an email from one of his Russian contacts] to Manafort, the newly named campaign chairman.

“Russia has been eager to meet with Mr. Trump for some time and have been reaching out to me to discuss,” the adviser told Manafort.

Manafort reacted coolly, forwarding the email to his associate Rick Gates, with a note: “We need someone to communicate that DT is not doing these trips.”

See? Paul Manafort is a good boy and didn't mean no harm! A 68-YEAR-OLD VERY GOOD BOY who's currently not allowed to leave his house LOLOL.

Thing is, whoever (Manafort) leaked to WaPo left out a very important part of the email, that makes him look very bad. Mueller, on the other hand, had access to all the BUT THEIR EMAILS! Look at this footnote:

Oh, so it wasn't "No Russia, no Russia, YOU'RE THE RUSSIA!" It was, "We'd better send the underlings to do the Russian dirty work, and keep our dirty Russian paws clean!" VERY INNARESTING.

In the original August WaPo piece, Clovis came off pretty well too, saying, "Oh I dunno, my mom says I'm not supposed to meet with Russians unless I talk to NATO first." BUT, as WaPo points out now, the emails quoted in the statement of offense released Monday also make Clovis look bad:

“Make the trip, if it is feasible,” Sam Clovis wrote in an August email to George Papadopoulos.

DO IT, BRO! Report back to HQ!

Another time Papadopoulos promised the campaign Russian joy and collusion, Clovis responded that he would have to work it through the proper channels, but nonetheless, "great work." But don't let this change your opinion of Sam Clovis, who is still a very good boy. A VERY GOOD 68-YEAR-OLD BOY.

But as WaPo notes, these guys weren't the only ones who knew Papadopoulos was doing "great work" trying to hook the campaign up on Bumble dates with Russians. Another person knew, a person who is very orange and has very tiny hands:

Trump himself knew of Papadopoulos’s claims that he had a pipeline to Moscow: During a March 2016 meeting of the campaign’s national security advisers in Washington that Trump attended, Papadopoulos said he had connections that could help arrange a meeting between the then-candidate and Putin.

AND THEN THERE IS ATTORNEY GENERAL JEFF SESSIONS (pictured above with Trump and Papadopoulos!), who still cannot recall whether he's ever met a Russian or who what why now, SLOW DOWN, YOUR DEMOCRAT FAST-TALKIN' QUESTIONS ARE MAKIN' HIM NERVOUS! And it is unfair to make Jeff Sessions nervous, because he is a very good boy. A VERY GOOD 70-YEAR-OLD BOY.

Charlie Pierce harks back in his piece to Sessions's confirmation hearing, where he lied to Senator Al Franken by answering a question Franken did not ask, about Russian collusion:

FRANKEN: If there is any evidence that anyone affiliated with the Trump campaign communicated with the Russian government in the course of this campaign, what will you do?

SESSIONS: Senator Franken, I’m not aware of any of those activities. I have been called a surrogate at a time or two in that campaign and I didn’t have — did not have communications with the Russians, and I’m unable to comment on it.

LOOK. AT. THAT. PICTURE. JEFF. SESSIONS. IS. SITTING. RIGHT. THERE. IN. THE. ROOM. WITH. PAPADOPOULOS. AND. TRUMP. AND. SOME. OTHER. JIZZ-SNORTING. SHIT-GOBLINS.

(Of course, your $5 Feminist harked back to the Sessions confirmation hearing too, in her post on Trump and Sessions's light treason lunch yesterday, because YOUR WONKETTE KNOWS STUFF ALSO, TOO, CHARLES P. PIERCE!)

One other thing of note is that Robert Mueller kept Papadopoulos's arrest and confession sealed, according to a filing, because disclosure would have "undermine[d] his ability to serve as a proactive cooperator." Whatever does that mean? Well, for one thing, it means after Papadopoulos was arrested back in July, Mueller might have gotten him to wear a wire and go back and chit-chat with Trump people about their bad Trump-Russia deeds. Allahpundit at Hot Air (we are all such strange bedfellows these days, aren't we?) posits a scenario:

Imagine Papadopoulos phoning a former top Team Trump official in early August to say, “They’ve arrested me! I don’t know what to do! I think I should tell them everything and make a deal!” He might have been told no, no, no, stay calm, deny X, Y, and Z, we’ll make sure Mueller never finds our emails from the campaign. And meanwhile, unbeknownst to the target, Mueller’s recording the entire conversation on Papadopoulos’s end.

We can imagine that! AllahPundit also notes the timing, considering how the original emails on Papadopoulos were leaked to WaPo in August. Manafort or Clovis trying to cover their big asses? Maybe!

Now, when we ask if Papadopoulos is the real pee tape, we don't mean to suggest Donald Trump didn't literally go to Moscow and get peed on or around by the finest Russian pee hookers. We're saying the more we find out about this early "get" by Robert Mueller, in the form of a young little dicknugget named George Papadopoulos, the more it sounds like it might end up being the trickle of Russian pee that turns into the full gusher, to coin a phrase.

But if the real pee tape is out there, we'd be down for that to get leaked too, like maybe when Trump is in Asia next week or something.