Is It Even Fair That Your Boss Has To Buy You Health Insurance? A Republican Thinker! 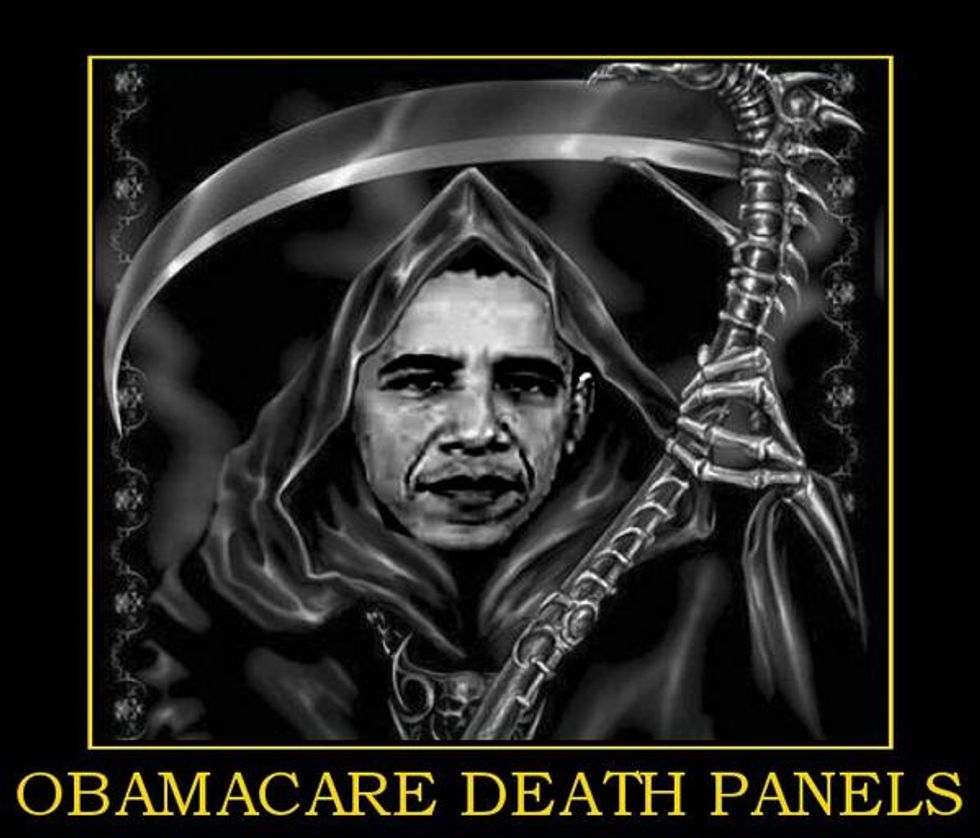 Needs more glowing blue eyes and speaking in ALL CAPS

Now that the Great Big Tax Cut For Rich Fuckwads bill has done away with the Affordable Care Act's individual mandates, some Republicans figure it's time to go after the law's employer mandate, too, which requires companies with more than 50 employees to provide health insurance or face a fine. Heck, if individuals aren't required to have insurance, why should employers be forced to insure anyone either? We thought that businesses were so overburdened that they needed to have the corporate tax rate slashed, but apparently, not one of them will be able to use that tax windfall to pay for health insurance, because it's not like healthy employees would be of any value in the first place.

Corporate lobbyists are hot for more money they can use on what really matters -- stock buybacks and increased shareholder dividends -- now that the individual mandate is gone:

The individual mandate and the employer mandate are “inextricably entwined,” said James A. Klein, the president of the American Benefits Council, an influential lobby for large companies like Dow Chemical, Microsoft and BP, the oil and gas producer.

Translation: We want to be free to fuck over our employees and make them buy their own damn insurance. Or go without. Fuck them, we can hire someone else.

He really should just shut up and look pretty.

Also, he's lying about the purpose of the employer mandate. It has nothing to do with supporting the individual mandate; both mandates were there to expand the risk pool for health insurance all around, because if you know anything at all about how insurance works, affordable insurance depends on having more people paying into the system than need to use the benefits. This is why you pay for your car insurance even though you personally do not intend to wreck your car. For some reasons, Republicans like to pretend this is unfair, instead of a basic fact about insurance. So yeah, they were "entwined" in keeping insurance more affordable.

Nonetheless, to be "fair" to businesses that just got a whopping tax cut, congressweasels Devin Nunes of California and Mike Kelly of Pennsylvania have introduced a bill to eliminate the employer mandate. And unlike the repeal of the individual mandate, which only becomes effective in 2019, the Nunes-Kelly bill would actually be retroactive, canceling any penalties on employers who didn't insure employees from 2015 through 2018. Nice deal, huh?

Now if you want to get all technical, and we do, because we are nerds, the individual mandate is still in the law: Since the tax cut was passed through the budget reconciliation process and could only address budget-related issues, the bill simply reduced the tax penalty for not having insurance to zero, effectively killing the mandate. Presumably, the same filibuster-proof fuckery would be used again to kill the employer mandate. This has at least one salutary side effect: Some future, saner Congress and president could reinstate the mandate and rescue the ACA simply by changing that tax penalty again to an amount greater than zero, which might be simpler than rebuilding the entire law. Hooray.

That said, if the employer mandate is repealed -- no doubt timed in such a way that the repeal wouldn't kick anyone off their insurance until after this fall's elections to insulate Republicans from the consequences, it would be incredibly expensive for taxpayers. Take away employer-provided insurance from millions of people, and they'll go looking for it in the individual market, which remains in place. And since there's no incentive for younger healthy people to buy insurance, the market will have even more older, sicker enrollees who use services, resulting in sharp premium increases. But, since the ACA was designed to offset premium increases through subsidies, a majority of policyholders would qualify for the subsidies, meaning that the federal government would pick up much of the tab for "freeing" businesses from the mandate.

So far, the Republicans have only managed to attack stuff that makes health insurance affordable, while leaving in place the parts of Obamacare people like, but which drive up rates, like protections for preexisting conditions or annual and lifetime caps on benefits. How those could possibly remain law without bankrupting insurance companies has remained unaddressed, but if Republicans want to implement Medicare for All once those companies are gone, we wouldn't complain. (Just kidding. The insurance companies will not go bankrupt, because those parts of the law will be repealed instead.)

It's hard to say how many businesses would actually drop employee health insurance, since even before Obamacare it was such an attractive recruitment benefit. Top employers would keep it for that reason, so the biggest losses would likely be among low-wage employers that had to be dragged kicking and screaming into providing insurance with the ACA. Of course, no matter how much Republicans scream that the ACA cost jobs, the reality is that since it went into effect, job growth held steady and expanded -- as Donald Trump has been happy to take credit for.

With an election on the way, it's hard to say how much the Republicans want another fight over taking people's healthcare away; some may decide it's not worth it this time out. With this crowd, many may just decide that if they're likely to lose control of Congress anyway, they may as well leave only wreckage for the incoming Dems to clean up.

Yr Wonkette is supported by reader donations. Please click here to send us money for our insurance -- which Rebecca is not going to drop, because she is not an asshole dick.