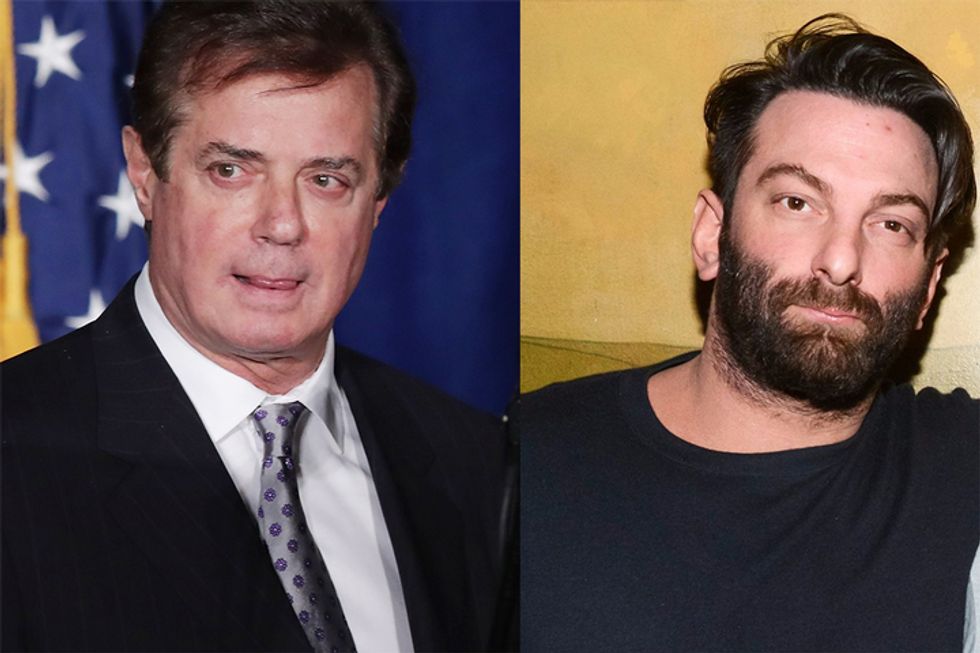 Sucks to be Paul Manafort this morning! Bob Mueller is putting the screws to Jeffrey Yohai, the real estate developer who got divorced from Manafort's daughter Jessica in August. In the good old days, Manafort and Yohai shared many funtimes real estate deals with all the dirty oligarch money Manafort was wiring in from the Ukraine. But since the divorce and all Manafort's legal troubles, the two have become estranged. SAD!

Hey, you know who's even less likely to keep quiet about all your shady money laundering than your no-good son-in-law? YOUR NO-GOOD EX-SON-IN-LAW, THAT'S WHO!

This morning the Wall Street Journal broke a story about Mueller's team coordinating with FBI officials in Los Angeles and New York. Seems that Yohai told fibs on some loan documents, and the Special Counsel is wondering if maybe he'd rather spill the beans on his former father-in-law than go to jail after having every aspect of his life examined by the FBI going all the way back to the day of his bris. Tough luck, Boychik!

Let's compare the WSJ story to the indictment filed on Mueller Monday and see if we can't make an edumacated guess as to what's going on here.

One of the ways Paul Manafort got illegal amnesty for his dirty foreign money was to wire in cash from offshore tax havens to buy real estate. He would then take out a mortgage on the property, and Hey, Presto! pocket the cash tax-free. In 2012, Paul Manafort wired $2.85 million from Cyprus to buy a condo in Soho, which he rented out on Airbnb for thousands of dollars a week. But in 2015, when Manafort went to take out a $3.18 million mortgage on the Soho house, he told the bank that the home was occupied by his daughter Jessica and her then-husband Jeffrey Yohai. Because it wasn't enough that he didn't pay taxes on the money in the first place AND that he was drawing six-figures of rental income from the property AND that he was taking $105,000 off his taxes every year for real estate depreciation. Banks offer a substantially lower interest rate for owner-occupied properties, and Manafort needed that, too.

In Paul Manafort's defense, he was in a bit of a cash crunch at the time. As reported in Business Insider,

In a series of texts to a friend in March 2015, [Manafort's other daughter] Andrea appears to have said Ukraine was "late in paying" her father.

"He is cash poor right now," the text said. "And now Ukraine is late in paying him."

It's not like you can dunn a Ukrainian oligarch, right?

So, Manafort got Yohai and presumably Jessica Manafort as well to sign documents attesting that they lived in the Soho house at least part-time. So please, Mr. Banker, give Daddy another $100,000 discount on his mortgage. And Manafort was nice enough to send an email telling Yohai, "Remember, he believes that you and Jess are living there." Because when you are (ALLEGEDLY) conspiring to commit real estate fraud and violate federal law by making false statements on a financial documents, you should definitely leave a paper trail.

And now, WE HAVE QUESTIONS. Leaving aside Yohai's liability for a minute, we are just wondering if Mueller has had a chat with Jessica Manafort. Because if she did sign those documents, she is also in a world of shit. And maybe her father would be more forthcoming with the Special Prosecutor when confronted with the possibility that his daughter could go to jail. In lawtalk, we call that vicarious cooperation.

The WSJ story mentions that Yohai has been having a nice kibbitz with the FBI men in Los Angeles. In an AMAZING COINCIDENCE, the federal indictment also mentions California! And lookyhere, Paul Manafort is once again in trouble for defrauding a bank.

In 2012, Manafort wired $3 million in cash from Cyprus to purchase a brownstone in Brooklyn. (We are sensing a pattern!) Because the Yohais were already pretending to live in the Soho house, Manafort needed to come up with another scam. So he slipped out of his $128,280 suit, lay down on his $934,350 rug, and stared at the ceiling until he came up with one.

"Ypa!" He shouted, having picked up a bit of Ukrainian on his ratfucking adventures in the FSU. "I will take out a construction loan of $1.4 million, and use the money to invest in my son-in-law Jeffrey's real estate flipping business in California. Let me quickly document this genius plan in an email to my accountant!"

Okay, we don't know for sure about the rug. But Manafort really did send an email to his tax preparer saying that he intended to use the construction loan to pay off a different mortgage, and when the money came through, he used some of it to invest in real estate in California.

So, right about now, Jeffrey Yohai has to be asking himself if he'd rather tell the prosecutor what he knows, or spend some time at Club Fed. To which we say, Listen to Your Wonkette, Boychik! Talk! That bastard wouldn't spend fifteen minutes in jail to save your tuchas!

Please to give us money for servers and salaries! YPA!