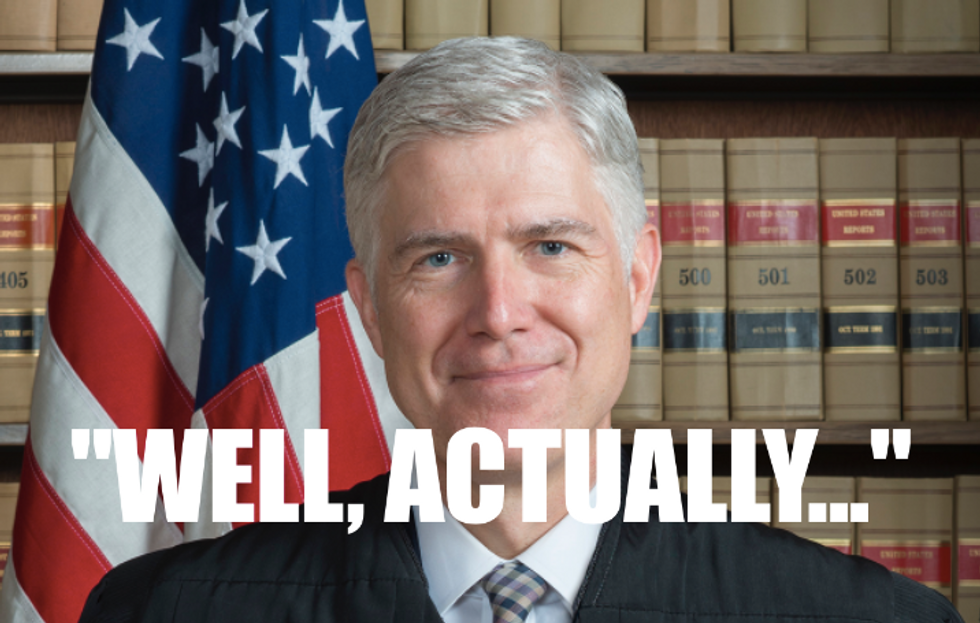 OOOOOOH, GIRL!!! Nina Totenberg is ready to dish on Justice Neil Gorsuch. And we at Wonkette are HERE FOR IT!

My surmise from what I'm hearing is that Justice Kagan really has taken him on in conference, and that it's a pretty tough battle. And it's gonna get tougher. And she is about as tough as they come. And I am not sure he's as tough, or dare I say it, maybe not as smart.

WHAAAAAA????? Did the Grande Dame of Supreme Court reporting just call the new guy a moron?

Totenberg told the essential SCOTUS podcast First Mondays that manspreading all over oral arguments is winning Gorsuch no friends.

It's not so much the number. If they were great questions, that would be one thing. But they're not. And they don't add a lot.

Sure Scalia asked a lot of questions. But at least his weren't STUPID.

I always thought he was very smart, but he has a tin ear somehow. And he doesn't seem to bring anything new to the conversation at least in the cases I have covered.

Gorsuch interjected to set him straight: "I-80 across Montana."

Roberts responded with a jocular reference to Gorsuch's roots in Colorado. "There you go," he said. "It's that geographical diversity."

Mitch McConnell broke the Senate to give you this stolen seat on the bench, but you should definitely give Justice Roberts the full Well Actually treatment. That'll go over, dude!

It was really striking how -- I don't know how to put this diplomatically -- how awkward Gorsuch is, Justice Gorsuch is. And how much he ticks off some of the members of the Court. And I don't think it's just the liberals, although it's certainly their hackles that you can see rise the most prominently.

Oh, you mean how he pissed off John Roberts by skipping the first conference, parading around Kentucky with Mitch McConnell, and giving a speech at the Trump Hotel that's the subject of an emoluments lawsuit?

Or how he's like a judge out of Dead Breitbart's Coloring Book For Homeschooled White Children?

During the partisan gerrymandering case, Gorsuch said to the lawyer, the counsel for the people challenging the gerrymander, "Maybe we can just for a moment talk about the arcane matter of the Constitution. And where exactly do we get the authority to revise state legislative lines." And there was a sort of beat in the courtroom. There was a sort of moment, a silent beat that you could almost feel. And within that moment, Justice Ginsburg leaned forward, which meant that I could just see the top of her head, and said to him, she actually said to Paul Smith who was arguing the case, "Well, where did we get one person one vote from then?"

Because that stuff about "the arcane matter of the Constitution" is just dogwhistling that he wants to shitcan the last 70 years of Supreme Court precedent on the Equal Protection clause and the right to privacy, aka abortion. Which is an odd position for a guy who wrote a book called The Law of Precedent. But intellectual whores gonna intellectually whore, right?

There are kind of little flip remarks. Even when he thinks he's being funny, it seems to fall flat. So, for example in the partisan gerrymandering case, he said to the lawyer who was challenging the partisan gerrymandering, that's Paul Smith, he said to him, "You know, what you're recommending here for a standard sounds a little bit like my steak rub. A little bit of this, and a little bit of that." And he was grinning, and I think he thought he was making a pretty good joke. And there was this eerie silence in the courtroom. People didn't laugh. I probably chuckled a bit under my breath because I felt bad for him. It was just awkward.

Yeah, we had a few chuckles about Justice Whitebread pretending to put turmeric on his steak ourselves. We really can't wait for the gayhating baker case so we can hear how the Justice expresses himself artistically by using ketchup to bake chocolate cake -- and thus you can't force a baker to create sodomy art for Adam and Steve. And Ohio can purge its voter rolls because sometimes he makes a BLT without tomatoes! Oh, that Neil is such a card!

Put some money in the kitty so we can bring you more SCOTUS news! You know you wanna!