Is The Dumbass You're Fighting With In The Comments Just A Dumbass? OR IS IT A RUSSIAN DUMBASS? 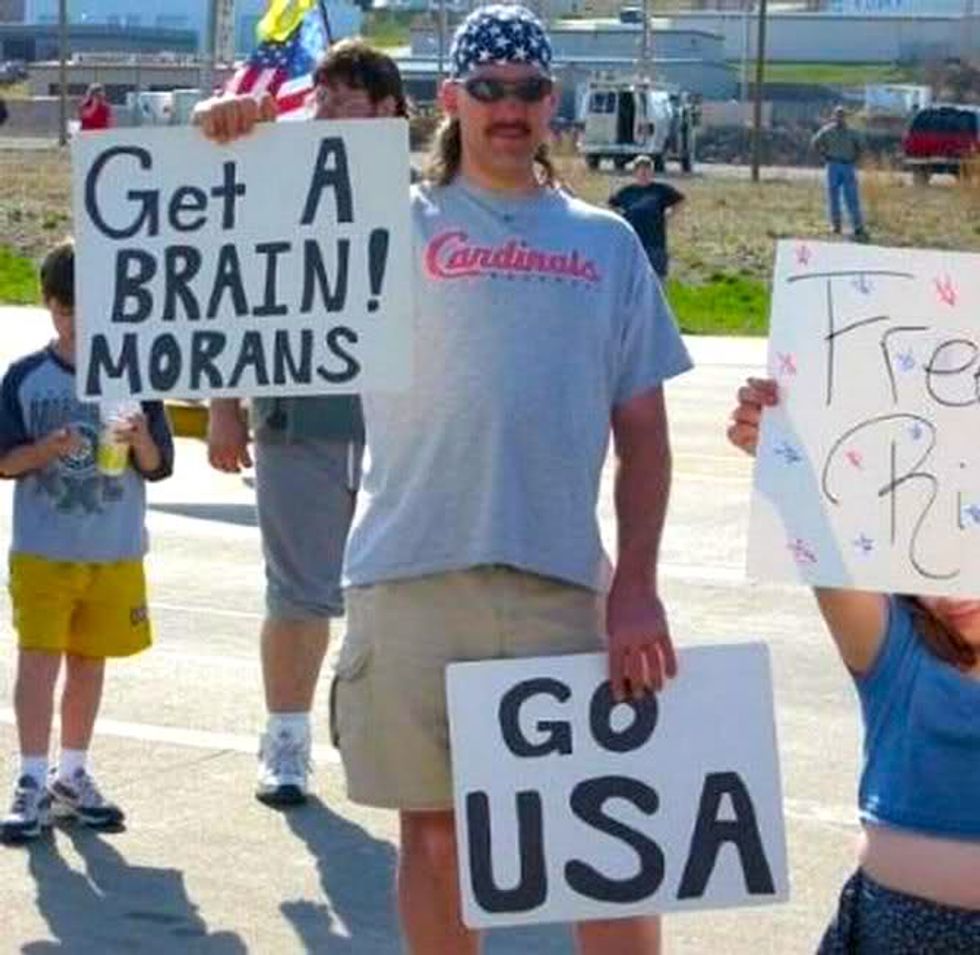 Donald Trump has been distracting us from the real news by being an absolute shit to war widows this week, so Wonkette is forgiven for just now getting to all this new stuff about Russian Troll Farms, and how they worked online to fuck with our election. Interestingly, a bunch of this new reporting comes from independent Russian media journalists, which apparently exist!

Remember the Russian troll farm in St. Petersburg called the IRA (Internet Research Agency)? Facebook has finally admitted to finding "470 fake accounts" and "about 3,000 ads," bought and paid for with $100,000 in RUBLES, linked to this agency. Wouldn't it be cool to meet somebody who used to work there?

Let's meet former paid Russian troll 'Max,' IF THAT IS EVEN HIS REAL NAME. (It's not.)

Russian independent media network Dozhdtalked to "Max," who worked at the IRA in 2014 and 2015, and he shared some interesting scoops! "Max" is not his real name, because you know how Russia is about people who tell secrets about their awful government. (It is very murder-y.)

It turns out even in early 2015, the Russians had their knives out for Hillary Clinton, probably because they knew she would run for president, and because Vladimir Putin is still sorely offended she called bullshit on Russia's fake bullshit elections when she was secretary of State.

"Max" worked on the "foreign desk" at IRA:

According to Max, the IRA’s “foreign desk” had open orders to “influence opinions” and change the direction of online discussions. He says this department within the agency considered itself above the “Russian desk,” which he claims is generally “bots and trolls.” The foreign desk was supposedly more sophisticated. “It’s not just writing ‘Obama is a monkey’ and ‘Putin is great.’ They’ll even fine you for that kind of [primitive] stuff,” Max told Dozhd. People in his department, he says, were even trained and educated to know the nuances of American social polemics on tax issues, LGBT rights, the gun debate, and more.

Basically, the Russians were in comments sections, studying what Americans fought about, and trying to stir up even more shit with their own comments. So the asshole you fought with who couldn't stop saying "FOUR DED MURCANS HITLERY PIZZAGATE NOBUMMER NEVER!" was probably a real American Republican idiot, whereas the one who said that stuff and spelled it correctly was probably a paid Russian troll. Indeed, they were monitored for how good they did English, whereas American Trump supporters aren't subject to such monitoring.

"Max" said they were sure to disguise their Russian troll identities, and that their mandate was absolutely about Hillary Clinton:

Even two years before Americans actually voted on their next president, St. Petersburg trolls were told to attack Hillary Clinton, reminding Internet users about her wealth, her husband’s legacy, and her various corruption scandals.

Not to slag on Bernie supporters, but one of the strangest things about the 2016 election season was the way some of his most ardent fans' critiques of Hillary Clinton sounded SO MUCH LIKE everything we've heard from the hard right for decades. Sounds like the Russians engineered it that way!

The employees were also supposed to watch "House Of Cards" to learn what American politics are really like. Which is just ... not the worst call they could have made, considering.

Max says the IRA even maintained a “secret department” that sent staff to the United States for certain undisclosed tasks.

HMMMMM, wonder what they were up to! Another independent Russian media investigation this week reports that employees of the IRA outfit actually did travel to the United States to provide material support to American activists (scroll down for more details!), but we wonder if that's all they did.

Did they meet anybody in the Trump data operation, maybe? Or possibly that crazy Hillary-hatin' Republican crank Peter Smith, who committed suicide just before the Wall Street Journal reported he had mounted a campaign to try to get Hillary Clinton's mythical "33,000 deleted emails" from Russian hackers? The same guy who bragged he was BFFs with Michael Flynn and his son, "Pizzagate Junior"?

Silly us, that was probably a COMPLETELY DIFFERENT department in the Russian military intelligence operation to fuck with America. Forget we said anything!

(By the by, special counsel Robert Mueller recently interviewed Matt Tait, a cybersecurity guy Smith tried to solicit for help in his Russian collusion endeavor. So did the House Intel Committee. If you haven't read it, check out Tait's firsthand account in Lawfare, "The Time I Got Recruited To Collude With The Russians.")

Anyway, our new friend "Max" says when he quit in early 2015, the IRA underwent a lot of changes in staff and leadership, and that they started "burning documents" and covering their ass more thoroughly. But the work went on!

But the work went on! Wait we just said that.

We've been learning bits and pieces about how Russian trolls tried to influence the election through issues-based Facebook pages. They created fake Facebook events in Idaho for anti-immigrant white supremacists, and they created fake Facebook pages to push the Texas secessionist movement. (Wonkette wrote about Russian involvement in Texas secessionist stuff in real time in 2015 and 2016, never imagining what a huge Russian interference campaign it was a part of. Oh, we were so innocent then!)

A giant Russian front was the Heart Of Texas Facebook page, which started out mostly as a Texas secessionist page, but then devolved into posting weird memes like this:

Russian independent media organization RBC.ru published a much deeper look into the work of the Internet Research Agency during the 2016 election, and it is full of "WHOA IF TRUE" factoids.

We're going long here, so how about some bullet points? If you want more, read it your damn self. (SPOILER: The Google Translate version is a piece of shit. SPOILER: We're cheating off a summary of the report from Quartz!)

Because of all the attention it's gotten, from a 2015 investigation into the group in the New York Times magazine, all the way up to the current investigations into the tech world's role in spreading Russia propaganda, it doesn't seem the "IRA" is doing very much to fuck with America these days. But as Wired reported in September, that's no big deal because there are always new Russian troll farms to play whack-a-mole with.

But it looks like the IRA is actually still there, working under a new name: Glavset.