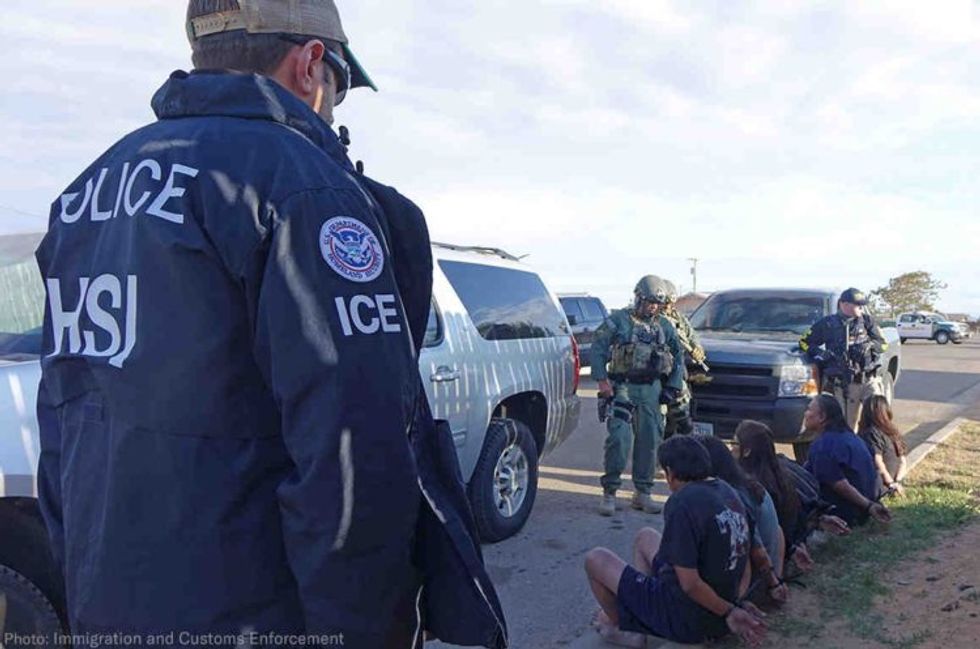 With just ICE for all.

Today's Incandescent Rage-inducing Immigration and Customs Enforcement story comes to us courtesy of ProPublica and the Philadelphia Inkwire, and details the highly aggressive approach to scooping up undocumented immigrants taken by ICE's Philadelphia office, which covers Pennsylvania as well as Delaware and West Virginia. While ICE offices everywhere have been "unleashed" by the Trump administration to go after every last undocumented migrant they can find, because really, they're all potential murderers who must be deported, the Philadelphia Enforcement and Removal Operations, or ERO, has gone after non-criminal immigrants with a vengeance. It's the New Cruelty "on steroids," as one now-retired ICE lawyer put it.

It's a long read, but an absolutely vital document of the meaner, more viciously racist nation we're becoming. Here's the report's summary of what distinguishes the Philadelphia region from other ICE-Stasi operations:

Reporters found that ICE officers under the jurisdiction of the Philadelphia regional office:

In a statement, agency officials said: “ICE and its employees have been given the honor of a special public trust. In keeping with this trust, ICE’s enforcement activities are conducted with integrity and professionalism.’’ They added: “ICE conducts targeted immigration enforcement in compliance with federal law and agency policy.”

It's all perfectly legal, and how are you libs even going to find out about it anyway, since ICE records are far harder to get at than other court records, because unlike municipal police records, ICE arrests and court records are largely hidden away from public view ... to protect immigrants' privacy, you know. And if in the process ICE's own operations are kept from scrutiny by nosy, trouble-making journalists, well isn't that a nice little side benefit? Even so, the Inquirer and ProPublica reporters were able to discover that, compared to New York and Los Angeles, for instance, the Philadelphia regional office has arrested three times as many "noncriminal immigration violators," as ICE likes to call undocumented migrants who haven't been convicted of misdemeanor or felony charges. Lots more people getting deported after a traffic ticket in the Philadelphia region than in other places. Looky, here's a chart comparing such arrests to ICEstapo offices in the rest of the country:

Elsewhere in the country, ICE is at least pretending to partially follow Trump's bullshit lie that deportations would be focused on "bad hombres," although certainly all illegals are bad -- those with criminal convictions of some sort make up 62 percent of total arrests. In Pennsylvania, Delaware, and West Virginia, that's reversed -- criminal aliens make up just over a third of arrests. But damn, the streets are a lot safer for 100% all-Americans with broken taillights. (Unless they're Driving While Black, of course, but that's a whole different kettle of injustice.)

Here's just one especially disgusting case, of many, where ICE has pursued and sought deportation of someone who, before our planet plunged into this crazy alternative universe where Spock will wear a duck on his head and set his phaser to "kill" if he thinks you're suspiciously logical, the agency wouldn't have bothered detaining.

Guillermo Peralta, for instance, is a severely mentally disabled man who doesn't know his own age. Two federal agents, Joe Vankos and Chad Noel, were out searching for a convicted cocaine dealer who was to be sent back to Mexico. Couldn't find him, so they scooped up Peralta, a bystander in the neighborhood they were searching. He'd do! In their report, the agents claimed Peralta talked to them and admitted he was undocumented, told them he was 46, and said he had a child in Florida. Hell, they could have said he'd confessed to being Ted Cruz's accomplice in the Zodiac murders, because the man simply doesn't have the mental ability to have done anything the ICE officers claim:

A neuropsychologist who later examined him wrote in an assessment for the court that Peralta cannot read, write, or identify colors and that he is not competent to give informed consent “or to understand any but the simplest instructions, requests or commands” [...]

[Peralta's attorney, Craig Shagin, said Peralta] was abandoned as a youth in rural Pennsylvania and has for decades made ends meet as an apple picker, pumpkin harvester, and construction worker in the Gettysburg area.

“I don’t think he knows what deportation is, what it is to be a national or a citizen of a place,” said Shagin. “So how was he answering the ICE officers’ questions? Either they made it up or maybe he was just saying, ‘Sí,’ to everything they asked. It’s easy to do when somebody has a gun and handcuffs in front of you.”

ICE lawyers argued that “even diminished intelligence does not necessarily mean that the respondent is incompetent.” Still, the government doesn’t seem in a terrible hurry to deport him; the next hearing in his case is not until January 2020.

After two months behind bars, Peralta was granted bail and returned to his home: a narrow room in a basement apartment, outfitted with a twin bed and a makeshift shrine to the Virgin of Guadalupe. Visited there by a reporter, he was welcoming but unable to respond to even rudimentary questions.

Asked his birth date, he said, “One, two.” Asked his address, he answered in halting Spanish, “I just live here.”

That's who we're being protected from. That's a bad hombre who needs to be deported to Mexico, where he can be left to die on a street and not be sucking up Our Precious Tax Dollars. Oh, sure, he may sound like one of "the least of these" that Jesus talked about, but you know, Jesus also was a stickler for following the law, and Guillermo Peralta's very existence in America violates the law. We must always follow the law. We are just going to keep typing "the law, the law, the law" so we won't put a fist through our computer monitor.

Peralta's case is only the most jaw-droppingly horrifying of those profiled in the ProPublica/Inquirer piece, which also notes that the Philadelphia office may be especially motivated to go after noncriminal immigrants as revenge for the City of Philadelphia's sanctuary policies -- although other ICE offices in cities with sanctuary laws haven't been nearly as abusive as Philadelphia's.

Oh, there's also this nice magistrate judge who puts down everything to call ICE if she thinks there's an illegal in her courtroom:

No, we do not know how Americans can adopt a baby but that does not make the child an American; maybe there are paperwork reasons a green card was easier than getting citizenship. In a rare exception to the norm under the New Cruelty, ICE dropped the case, the judge apologized and eventually married the couple (they didn't want to lose the $45 fee), and the Parkers have moved to Florida where they hope they'll be a little safer than in Pennsyltucky.

The article opens and closes with the travails of Ludvin Franco, who married an American citizen in 2013 but foolishly waited until 2016 to apply for a green card. He was deported to Guatemala last year after a minor traffic accident, which made him a danger to America's security -- he drove without a license!!!!! His wife, Anne, has been researching other countries she, Ludvin, and their two-year-old twin sons might move to (a visit to Guatemala left the toddlers with diarrhea for a month, so maybe not there). Ludvin tried crossing the border again but got caught and deported again, so now he's really out of luck as a dangerous illegal multiple crosser. As it turns out, Anne received a letter shortly afterward saying he had an initial interview for legalization, because the universe sucks now. Perhaps she could keep a journal and publish it to defray some of the costs of moving to a less horrible country than ours; surely there's a market for the Diary of Anne Franco?

Democrats might want to consider a platform plank for 2020 that would expedite re-entry and a path to citizenship for people crushed under the Trump agenda. Call it Amnesty, Hell Yes.

As we say, go read the whole thing. But put any breakables away first. And for fuckssake don't read the comments, which are full of people who want America protected from dangerous adoptees with borked paperwork and mentally-disabled fruit-pickers.

Yr Wonkette runs on reader donations and incandescent rage. Please click here to convert some of the latter into text