It Is A Day, So It Is A Trump Tax Griftapalooza!! 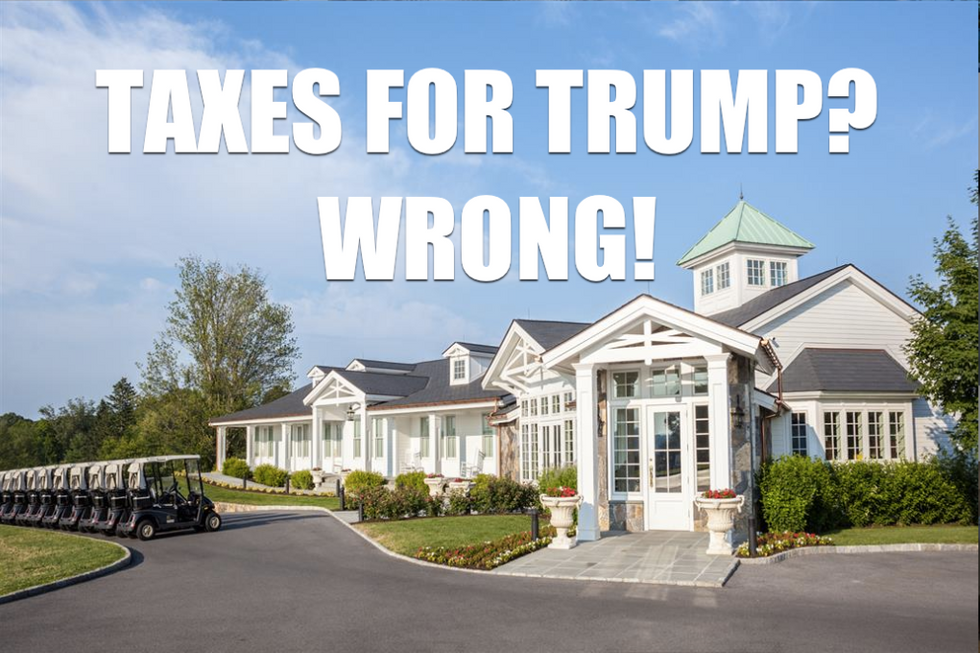 Another day, another Trump grift. And we're only 151 days in! Today's episode of Cash Grab takes place in Briarcliff Manor, New York, where Trumpspawn Uday and Qusay are complaining about having to pay property taxes on one of Daddy's trash palaces. HELLO! Nobody gets into real estate because they like paying taxes! And did they mention their father is the President?

Trumpscandal superfans will remember that Trump National Golf Club in Westchester is the property where the architect was owed $140,000 but Trump handed him a check for $25,000 and told him to take it or leave it. As reported in Forbes,

We didn’t even collect enough to fully compensate all of our consultants. We had to go back and ask them to take less. I had to divvy up the $25,000. I only kept a small amount. We had to dig into credit lines just to keep the ship afloat. I’m a sole proprietor so we siphoned off much of my savings. Then the recession hit. We were just getting back on our feet from the Trump punch in the stomach and a lot of other work fell away. We got really close to folding. There were two years when my income was zero.

Trump bought the property in 1996 for $7.5 million dollars and spent $45 million renovating it. Annual dues are $19,400, with initiation fees of $50,000. And on his recent financial disclosure with the Office of Government Ethics, Trump claimed the property is worth upwards of $50 million and generated almost $10,000,000 in income last year.

But when he's dealing with tax authorities in the little town of Ossining, New York, Trump insists that the property is worth only $7.5 million. The same amount he paid for it 20 years ago. Bless his heart.

As CNN reports, suing the shit out of towns until they cry uncle is Trump's regular M.O.

This isn't the first time Trump has fought a property valuation. In fact, CNN found that it's part of a pattern -- he's fought the tax assessments of all 12 of his U.S. golf courses except the one in Bedminster, New Jersey. On that course, he raises goats to qualify for a New Jersey farmland tax break.

In 2015, Trump's lawyers argued that the Westchester club was only worth $1.35 million, and they managed to get the $38 million assessment knocked down to $16 million. Trump is still litigating his 2015 and 2016 tax bills in court, and sends his property tax checks in stamped "PAID UNDER PROTEST." Which sounds like some sovereign citizen bullshit, but is actually a way of saying that payment isn't an admission that the debt is valid.

But how can you even expect a $50 million dollar property to turn a profit if it has to fork over a whole $450,000 in taxes every year? UNPOSSIBLE.

Sure they get to write that $450,000 off on their federal taxes. And tax nerds may notice one or two write offs in this picture. Like golf carts, which depreciate over 7 years - so a $7,000 cart nets the owner a $1,000 write down yearly. And that fancy clubhouse, which is probably worth at least $150,000 per year in federal tax write offs.

You want to know why Trump doesn't want to show you his tax return? Because he's probably taking a $2 million dollar depreciation deduction on this property alone every single year! And the citizens of Briarcliff would do more than stage a protest on Trump's birthday if they saw the real numbers.

Also, he's probably in hock to Russia. And may not even be a billionaire.

At any rate, it is just unreasonable for the town of Briarcliff to ask a private business to fork over $450,000 to subsidize the school system. Golf courses are for polluting the waterways and entertaining douchebags, not redistributing wealth from makers to mooching kids.

Give us money! We promise not to use it on golf!