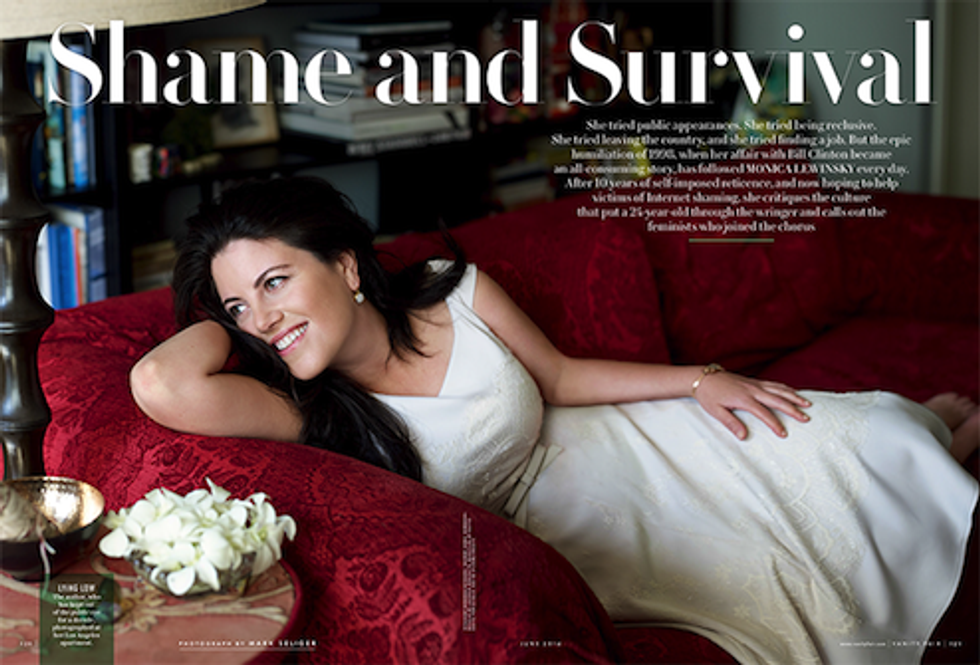 Well, now I am back, to tell my story for money, because I have not been able to get a job in all that time except for the one time I designed purses, which everyone laughed at, because I'm such a big joke. I have been a global punchline since I was 22 years old probably, not sure, would have to look it up. I have been unemployable, undateable, and about 15 years early for the crusade against slut-shaming. That would have been nice.

Am I sorry that my sluttiness occurred on someone else's husband's dick? I assume so, probably, sure! But you just try to tell me you wouldn't have been all up in the Big Dog's crotch, and I will call you a liar to your face. It was exciting! He's a charismatic fellow! And you have been jizzed on by so much worse.

It was probably a mistake to remain silent -- you never even heard my voice for years after that! -- and hope it would blow over. (GET IT? I MADE YOUR BLOWJOB JOKE FOR YOU. Christ.) If I hadn't remained such a mystery wrapped in a riddle slathered in really cute lipstick, maybe your ungodly fascination in the first president in the history of the universe to get some strange would have faded in time. Maybe I could have done something with my master's degree from the London School of Economics, or met a nice boy. I could have at least had a reality show. Instead, Kim Kardashian makes millions every time she tweets about a shoe, and she only fucked some second-rate R&B singer. BUT NOOOOOOOO, I had to be too classy and private for that, and apparently, I am also really nice.

Why were you so fascinated, anyway? There wasn't even Twitter yet. I didn't even say anything about negroes. I was just a girl with a crush on the president, and did some sex stuff on him, and had some evil shitty friends who betrayed me pretty bad. And I'm the bad guy here? Also, why didn't I just move to France like 10 years ago? That probably would have been a good idea, that I should have done.

Sure, Bill Clinton still gets cigar jokes once in a while, and "what the meaning of 'is' is," and Hillary still has Maureen Dowd writing batshit insane things about her every time she turns around. But they still are allowed to have "jobs," and "relationships," because "reason."

To recap: I am probably sorry I sort of fucked your husband, Hillary, but eternal banishment from society seems a little overreacty, please buy my book if I wrote one (unsure).